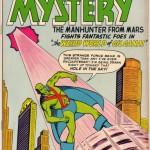 I just want to put out a useless fact for you guys right now. With this post, if you look directly to your left on the website, I now have one more post than Marsha! That means I’m coming for you next Alan… And in 40 years I’ll catch up with Phil. Let’s do this! House of Mystery 144 from 1964 I’ve reviewed House of Mystery four times already, but it’s never had a superhero story on the cover… until now! As House of Secrets became about Eclipso and that other dude, “Mystery” became a Martian Manhunter book. And, in … Continue reading → 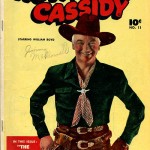 All right folks, in honor of Cowboys & Aliens (the best movie of the summer that Eddie won’t see (make sure to yell at him about that)), each comic this week ties in to either Cowboys or Aliens. I know, I’m adorable. Let’s do this! Hopalong Cassidy #11 from 1947 Oh Cowboy comics from a time before most of us were born… What would we as a society do without you? The thing about these comics is that they’re almost always some kind of anthology book, where ridiculous things happen to our hero (in this case Mr. Cassidy), but everything … Continue reading →

It Came From the Back Room #18 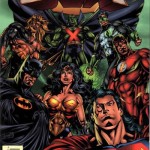 Standard recap: I’m slowly going through AABC’s one-million-plus back-issue room, restocking the boxes on the sales floor and pulling stuff to sell as discount/overstock/special items. I’m going through the alphabet backwards (don’t ask), and at my speed, this amounts to a two-year project. This week is brought to you by DC, who have the longest-running of all the “J” titles: Justice League of America In our last regular installment (before we broke to discuss Dwayne McDuffie), we had just finished up Justice League Volume II (the ’80s Giffen/DeMatteis bwah-ha-ha run), and were about to start the next incarnation.That would be the … Continue reading → 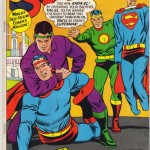 Here we are back for another round of me judging books that came out before I was born! Whoo! Superman 200 from 1967 So this was an “imaginary story” meaning it has absolutely no consequence on the main Superman mythos.  To say the least, it was a lot of fun.  The bottle city of Kandor is replace by Superman’s home city, Brainiac is a good guy, and Kal-El’s younger brother Knor-El takes over as the new Superman.  However, things go bad when Knor is exposed to kryptonite, and Kal-El has to save him.  Cue to a crazy-random-happenstance where Green Kryptonite … Continue reading →