It Came From the Back Room #18 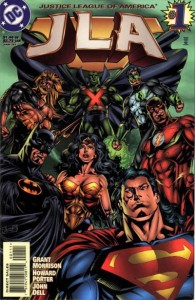 Standard recap: I’m slowly going through AABC’s one-million-plus back-issue room, restocking the boxes on the sales floor and pulling stuff to sell as discount/overstock/special items. I’m going through the alphabet backwards (don’t ask), and at my speed, this amounts to a two-year project. This week is brought to you by DC, who have the longest-running of all the “J” titles:

In our last regular installment (before we broke to discuss Dwayne McDuffie), we had just finished up Justice League Volume II (the ’80s Giffen/DeMatteis bwah-ha-ha run), and were about to start the next incarnation. 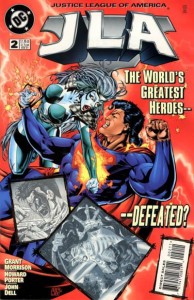 That would be the Jan. 1997-dated JLA #1, written by Grant Morrison and penciled by Howard Porter.

It’s hard to believe now, but at the time Morrison was a controversial choice — having cut his teeth on British mags like 2000 AD, he’d first attracted attention in the US with his run on Animal Man in the late ’80s, and in late ’96 was just finishing up the first volume of The Invisibles for Vertigo. He was known as a dense, quirky indy-type creator, partial to weird tangents and conspiracy theories in his books, and it wasn’t clear that he could do a flagship, straight-ahead regular-superhero team book like JLA. 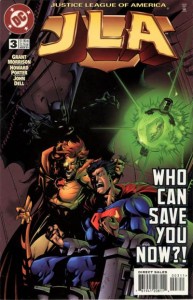 As it turned out, he could. Skeptics were immediately impressed by his first arc, a four-issue tale in which the JLA is supplanted by a mysterious group of new heroes, whose remarkable powers and benevolence bring them world acclaim, and push the “old”heroes into the shadows — until the inevitable reveal. No spoilers here — the reveal, as with a lot of Morrison, is one of the best parts — but the most talked-about issue was #3, in which Batman, apparently the sole uncaptured hero, is forced to fight the enormously-powerful bad guys alone and injured, and they chuckle sinisterly and do the, “He’s only one man, and he doesn’t even have powers” thing, and of course Batman kicks all of their asses, and at the same time the rest of the JLS are doing clever little super-things too, and everybody contributes to the sinister alien beatdown and it’s all enormously satisfying.

Morrison followed that with three issues of one-shots introducing a new Superwoman and the angel Zauriel, and a two-parter with old-school JLA supervillain The Key, and then introduced his next longer story, “Rock of Ages,” in issues #10-15. This started out as an Injustice Gang story and eventually was about the Kyle Green Lantern and Wally West Flash getting help from the hyper-heroes of Wonderworld, and Darkseid taking over the world to create a brutal alternate future until Kyle and Wally show up and the now-much-older Batman seizes the opening, and the Connor Hawke Green Arrow and Ray Palmer Atom team up to take down Darkseid, and then everything

snaps back to the present and the Injustice Gang again, this time in a double-sized issue, and it turns out just the way you’d want it to;  before you know it Plastic Man’s in the JLA and Prometheus shows up and… well, it’s a lot of fun, and Howard Porter’s meat-and-potatoes, unflappable ability to draw and sell any weird Morrison-inspired hallucinatory experience is just right; even the corporate-mandated electric-blue Superman seems reasonable.

Even the fill-ins are good: Mark Waid offers a run in issues 18-21 that includes a classic Silver-Age-intinged Adam Strange-and-the-JLA story that could have been commissioned by Julie Schwartz, and then it’s back to Morrison and Starro and the Ultramarines Corp and Amazo and “Crisis Times Five,” a four-part JLA/JSA crossover that links Johnny Thunder’s 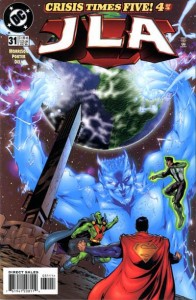 Thunderbolt to a whole extra-dimensional menagerie of imp civilizations. A few more Waid fill-ins and smaller efforts and Morrison is ready to bow out with his six-part “World War III” in issues 36-41, featuring the return of the Injustice Gang and the menace of the immense, ancient alien war machine, Mageddon.

That’s four good long arcs, at least two of them great, spread out over 40 issues (many of them now available at $2 or less on the Specials racks, and the rest in the regular back-issue boxes and as trade paperbacks, just as a reminder of why I do these lists…), a decent legacy, Morrison leaving at this 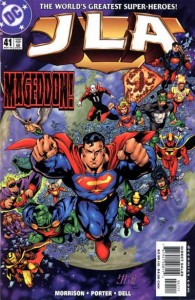 point to begin his even-better-regarded run on New X-Men.

As for JLA, it goes through a Mark Waid period with at least two memorable longer stories, the Ra’s Al Ghul everybody’s-speaking-and-reading-in-gibberish one and the Queen of Fables one (with art by Bryan Hitch), and then it’s Waid and Hitch all the way through #55, after which Hitch leaves and Waid follows a few issues later.  Issue #61 sees the debut of Joe Kelly and Doug Mahnke; they begin a useful and entertaining run anchored more by Mahnke’s art than Kelly’s scripting, although there’s enough smart commentary and off-center characterization to keep it entertaining even through the grueling return-of-Aquaman six-parter, 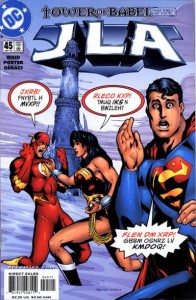 and through to the much more entertaining J’onn-J’onzz-gets-possessed one inissues#84-89, followed by a neat little Batman/Wonder Woman one-shot in #90, and a Chris Claremont/John Byrne six-parter in #s 94-99. Chuck Austen shows up in issue #101, and nothing memorable happens until #107, when Kurt Busiek and Ron Garney offer the first of an eight-part Earth-III Crime Syndicate crossover (that would have been just about perfect as a four-part story, but, hey). Then it’s run-ups to the JLA Infinite Crisis ohmigod-they-made-the-evil-villains-forget-things-how-dare-they breakup, and the third Justice League volume is over with issue # 125. 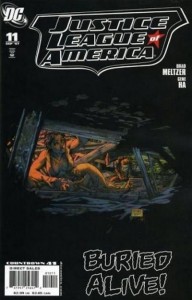 The current incarnation, which has been around a little over five years, is also represented on the overstock racks — It starts with an OK-but-overhyped Brad Meltzer run (the only one I can even remember, beyond vague recollections of the Red Tornado, is the Red Arrow-and-Vixen-trapped-under-the-rubble one) but then seques into the decent Dwayne McDuffie one we talked about last week, including his Injustice Gang take (and most of those books are still out on the Specials racks, too), and now the James Robinson/Mark Bagley incarnation with all the second-generation heroes, which brings us up to now. Next: the end of “J,” featuring Jonah Hex, and the beginnings of the letter “I.”

With 40 years of experience in comic reading, collecting and reviewing, English Professor Phil Mateer has an encyclopedic mind for comics. Feel free to ask Phil about storylines, characters, artists or for that matter, any comic book trivia. He will post your questions and answers on the AABC blog. His knowledge is unparalleled! He is also our warehouse manager, so if you are looking for that hard to find comic book, ask Phil!
View all posts by Phil →
This entry was posted in DC, News & Promos, Reviews and tagged Batman, Bryan Hitch, Darkseid, Dwayne McDuffie, grant Morrison, Howard Porter, Injustice Gang, JLA, Justice League of America, Mark Waid. Bookmark the permalink.