Here we are back for another round of me judging books that came out before I was born! Whoo!

So this was an “imaginary story” meaning it has absolutely no consequence on the main Superman mythos.  To say the least, it was a lot of fun.  The bottle city of Kandor is replace by Superman’s home city, Brainiac is a good guy, and Kal-El’s younger brother Knor-El takes over as the new Superman.  However, things go bad when Knor is exposed to kryptonite, and Kal-El has to save him.  Cue to a crazy-random-happenstance where Green Kryptonite actually works like Red Kryptonite (what are the odds!?) and eventually everyone lives happily ever after.  No joke, this story ends with Kal-El in Canada and some comment about how great they are.  What’s not to love?  More info can be found HERE

It’s Superman folks.  To read about him, just look for the big S.  Right now you can read about his adventures in either Superman or Superman/Batman.  There’s also plenty of back issues.  Just ask! 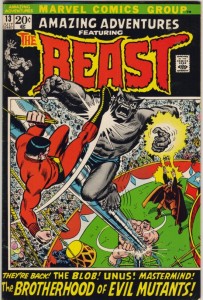 You had me sold at Unus the Untouchable.  If there’s any classic Marvel Villain in desperate need of a comeback, or even a Bowen bust, it’s Unus.  Make that happen Marvel!  Back in the 70’s I’m assuming no one knew what to do with The Beast.  So they erased his memory and threw him into this Amazing Adventures title to see how the public would react.  What we get is a strange series of stories about a “Gray version” of the Beast.  This story is kind of interesting, but the art is a bit of a put-off.  Beast is drawn with excessive muscles that shouldn’t exist.  That makes all the movements and actions look strange.  But the fight with Unus and Blob is just enough to make things interesting and worth reading.  More info can be found HERE

Beast is a relatively lower-tier character these days.  He quit the Uncanny X-men title to kind of “find his way” in the world.  Now he’s part of the Dark Avengers, but he hasn’t really shined there either.  Nowadays, he’s blue and furry, just like a teddy bear, with teeth. 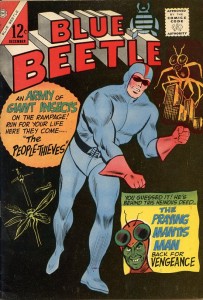 What’s fun about these Golden age Charlton and Gold Key type comics is that you know they just don’t care.  Why not have a Beetle fight a Praying Mantis?  Why not have a naive love interest who literally just can’t put two and two together?  Why deviate from the 6-panel structure that everyone is doing?  What’s a splash page?  I applaud this issue for it’s simplicity, and it works as a perfect representation of what a generic 1960’s comic had to offer.  I’m not gunna lie; it was kooky, but it’s just so old school that you can’t help but appreciate it.  This is the kinda comic that shaped the modern comics we see today, and if it wasn’t for Blue Beetle and “The Praying Mantis Man Back for Vengeance,” we wouldn’t be where we are today!  More info can be found HERE

Blue Beetle was eventually cancelled by Charlton.  DC bought the rights, and put Ted Kord in the suit.  Then he died, and now Jamie Reyes is in the role.  He’s currently appearing in Justice League: Generation Lost, and it looks like he may die soon too…

And that’s it!  Don’t forget to either make recommendations or leave comments in the section below!

One Response to Fresh Eye on Old Books #14 by Dan!