Do you ever just get really sick and tired of reviewing comics?  Cause I don’t! Let’s do this! 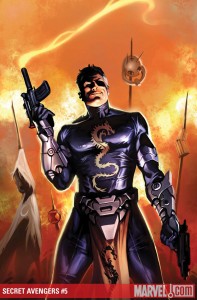 What do you do when your superstar artist takes an issue off?  You bring in two of the sweetest possibly fill-in artists to come and do the job.  Both Aja (Iron Fist) and Lark (Daredevil & Gotham Central) have worked with Brubaker before, and they pick up right where they left off in terms of quality.  An absolutely fascinating back-story for the “Nick Fury” that’s running with Hydra right now, and it’s clearly helped by the amazing artists.  While Hickman does his own crazy whatever over in Secret Warriors, Brubaker comes off like a newer hipper Jim Steranko.  He’s able to pull off intrigue, espionage and noir elements all into one fantastic comic book. 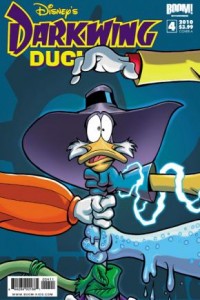 There’s a reason this isn’t listed as part of the Boom Kids line, and that’s because it’s designed for 20-somethings like me.  Once a month, Brill and Silvani put out a book that takes me right back to Disney Afternoon, and there’s really no greater compliment than that.  Without a doubt this is the perfect comic for fans of the show, and it’s clear that Brill is writing the book as one himself.  Silvani picks up on every detail, makes it all look picture perfect, and this is becoming an absolutely stellar read.  Not to mention that it totally just linked up with Ducktales!  Scrooge McDuck, GizmoDuck and more are all just enough to have this reviewer grinning like an idiot every time he turns the page.  Now if we can just get the show back on the air… 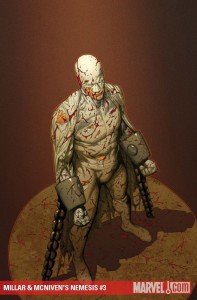 So uh… if ya want fun and light, read Darkwing.  If you want the exact opposite, then Nemesis is the book for you.  Just the first couple pages (even I read the script in the back and it blew my mind) show how strong McNiven is as an artist.  The S#!% really hits the fan with this issue, and the topics that it delves into are kinda blowing my mind.  Nemesis basically completely destroys everything he can, and makes it appear almost too easy.  Just one more issue to wrap things up, and I’m excited to see what we get for an ending.  I’m starting to think that Nemesis may be the President of the United States, but that’s just too crazy, isn’t it?  Oh well, there’s only one more issue, and based on the release schedule, we should know some time in 2011.  I kid, I kid… 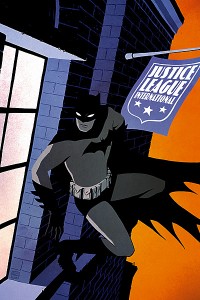 I shouldn’t like this book as much as I do.  But it just keeps chugging along and amazing me with what it has to offer.  The use of Magog was actually pretty interesting, (feels like I’m selling my soul saying that…)  Batman and Power Girl almost figuring out everything, and even the interactions between Fire and Ice really worked well.  I thought that with Giffen leaving as a writer, we might start getting some stereotypical Winick-isms, but nothing has really messed up this title.  It’s surprisingly better than Brightest Day, which is really saying something based on my initial thoughts.  If you’re a fan of the old school (i.e. 80’s) Justice League, then this is the ideal book for you.  Read it, it’s good, I swear. 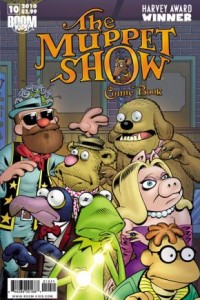 Have I mentioned how consistently sweet this book is.  I have?  Well, now I’m going to remind you.  This is without a doubt the best freaking kids book available to anyone anywhere, and you wanna know why?  Because it’s not specifically for kids.  A lot of the jokes are going to amuse the young ones, but there’s plenty here for adult readers too.  Langridge has shown issue after issue how capable he is of producing an amazing and hilarious comic book.  It takes me back to when I used to watch the Muppet Show on Nickelodeon (No, I’m not old enough to see the original, but old enough to see repeats) and as a kid probably didn’t get half the jokes.  Langridge should spearhead the next Muppet tv show or movie, because he clearly has a grasp on how all these characters work.

Avengers #5 Writer: Brian Michael Bendis Artist: John Romita Jr.: All right, Bendis and time travel aren’t mixing as well as they were.  Hopefully things will be explained and wrapped up, cause it was a little off this issue

Thor #615 Writer: Matt Fraction Artist: Pasqual Ferry: Some interesting ideas from a good new creative team.  Watch this, cause it may get way better really quickly.

Ultimate Spider-Man #14 Writer: Brian Michael Bendis Artist: David LaFuente: A solid wrap up to what turned out to be a very interesting Chameleon story.  I look forward to whatever is next.

Simpsons Treehouse of Horror #16 Writer/Artist: Various: Not as crazy as last year’s, but that might be a good thing.  Great Kelley Jones art, and plenty of interesting stories make this a fun read, much like it is every year.

Shadowland Moon Knight #2 Writer: Gregg Hurwitz Artist: Bong Dazo: Worth noting cause it’s as good as Moon Knight used to be.  Interesting take on a piece of the Shadowland story.

Power Girl #16 Writer: Judd Winick Artist: Sami Basri: It’s definitely been a huge step down in quality since the creative team change.  I’m not sure this title can recover.

Hulk #25 Writer: Jeff Parker Artist: Gabriel Hardman: Interesting concept of how they’re going to use Rulk now, but that’s about it.  Maybe potential, but I won’t get my hopes up.

Fantastic Four #583 Writer: Jonathan Hickman Artist: Steve Epting: I like Epting in anything he does, so I like this.  Still not sure where Hickman’s going, but that may not be a bad thing.

Justice League of America #49 Writer: James Robinson Artist: Pow Rodrix: This was just… kinda stupid, to be honest.  It might be because I could care less about Donna Troy, so facing her personal demons is really the least of my worries, but there’s something more that’s not working.  Robinson’s entire run just has not clicked for me, and one of the biggest issue is the narrations.  Every member of the league has a narration whenever they’re around.  It sounds nit-picky, but it really hinders how the reader even looks at the page.  I keep wanting it to get better, but it’s just not.

Well, this was about as bad as I was expecting it to be.  A wrap-up of the three issue mini that followed the origin of Hit-Monkey.  Do you care?  That’s what I thought.  Aside from a sweet Dave Johnson cover, there isn’t really much to offer here.  Did he kill Bullseye?  Cause that doesn’t make any sense if he did.  But trying to make sense out of a comic about a primate hitman is really not something I want to do, so I choose to ignore and move on.

And that’s it!  More later, as always!

One Response to The Latest and (Mostly) Greatest #6 by Dan!