All right folks, in honor of Cowboys & Aliens (the best movie of the summer that Eddie won’t see (make sure to yell at him about that)), each comic this week ties in to either Cowboys or Aliens. I know, I’m adorable. Let’s do this!

Oh Cowboy comics from a time before most of us were born… What would we as a society do without you? The thing about these comics is that they’re almost always some kind of anthology book, where ridiculous things happen to our hero (in this case Mr. Cassidy), but everything ends with a laugh. And that’s exactly what happens here, but who cares? Formula is formula, and if it ain’t broke, don’t fix it. What is interesting is that this comic not only abandons the strict nine-panel grid of most older comics, but it also bends the panels. Not everything comes in a perfect square, and that’s actually interesting to see in a book from this age. More than anything, it’s an experiment in testing the art form that leads to some interesting situations. Yes, this is the nerdiest analysis I’ve ever written that didn’t directly deal with the stories, but I”m over it. More info can be found HERE

There’s not really much Hopalong in this day and age, but if you come to our store, we can show you some good westerns. Just read Jonah Hex already! 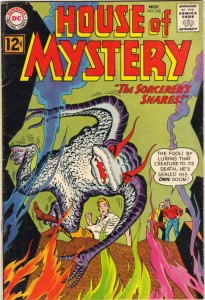 On the other hand, ALIENS & ROBOTS. Speaking of anthology series, here’s another dose with House of Mystery. I’ve discussed it before, but each story taken individually tells you what you’re going to be dealing with. In “captives of the robot brain” a bunch of humans have to fight their captor; it’s very straightforward. “Hand of Glory” doesn’t make any sense because it’s one page. “The Deadly Faces of Dawn” has a lady who keeps changing her face to look like the most beautiful women of the past, and no, I can’t make that up.  Finally, “The Sorcerer’s Snares!” involves booby trapping a forest to help prevent a monster from killing harmless humans. House of Mystery was basically the Twilight Zone of comics for the 1960’s. That’s not a bad thing, trust me. I love the freakin’ Twilight Zone. More info can be found HERE

House of Mystery doesn’t exist anymore, but there may be another anthology coming down the pipelines with the new DC relaunch. Make sure to stay tuned! 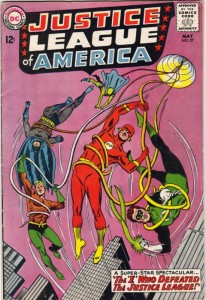 That cover kinda looked like an alien, so for the sake of consistency, I’m counting it! The mysterious “I” has decided to screw with the Justice League. What’s fun about these old issues is that no one let’s each other know their secret identities, so there’s a bunch of mental strife over what everyone knows. It’s actually funny in one of those “obvious-plot-point-for-a-soap-opera” kinda ways, and it leads to an interesting 60’s dynamic. The Justice League has to use the Amazo that they captured in a previous issue to defeat “I” but of course, things aren’t quite what they should be. Also, in case I forget to mention this, Snapper Carr is really Really REALLY annoying. That is all. More info can be found HERE

The Justice League will make their grand return in the last week of August as part of the DC relaunch. Look for this to be the hot flagship title of the whole thing. Check it out, it might be good!

And that’s it, as always, insert witty catchphrase here!

This entry was posted in Reviews and tagged Hopalong Cassidy, House of Mystery, Justice League of America, Twilight Zone. Bookmark the permalink.