I just want to put out a useless fact for you guys right now. With this post, if you look directly to your left on the website, I now have one more post than Marsha! That means I’m coming for you next Alan… And in 40 years I’ll catch up with Phil. Let’s do this! 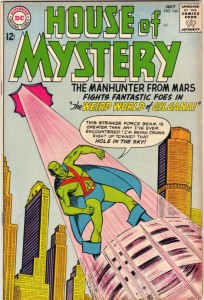 I’ve reviewed House of Mystery four times already, but it’s never had a superhero story on the cover… until now! As House of Secrets became about Eclipso and that other dude, “Mystery” became a Martian Manhunter book. And, in a word, it’s fun. The first story involves invisibility, and includes fighting aliens; the second involves a gun that shoots two bullets that bring treasure and one bullet of doom(!!!) and the third story is the Manhunter yarn. For some reason, I love the simplicity that is Martian Manhunter from the 1960’s. It seems like the writers were just having fun with a strange character. I really, REALLY… hate his sidekick Zook, but that might just be me. Manhunter travels into a world with a rhino creature shooting horns at people and he has to save the day. What’s not to like? More info can be found HERE

Martian Manhunter is back and better than ever in the DC relaunch! Look for him in Stormwatch, where he’s the first main DC character to really interact with the Wildstorm universe. It doesn’t suck! 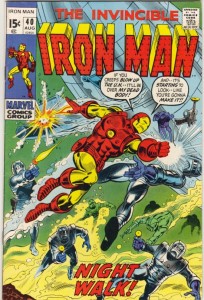 George Tuska has a way of drawing crazy eyes that’s nearly unmatchable, and that’s evident on the first page of this comic. I’m not exactly sure what happened last issue, but apparently Tony Stark thinks dragons are going to attack him. Such is life in the Marvel Universe folks. I can honestly say I have no idea what I just read, but it was very pretty to look at. There’s this weird back and forth between unconscious Stark and some Irish dude and a story that I flat out do not understand. Long story short, Stark sorts himself out and wins… I think. I’m sorry, but there was something about this comic that was just completely inaccessible to me. That’s a first, maybe I’m just tired, or I forgot how to read; either one works. More info can be found HERE

Iron Man is obviously still around. He’s the headliner for the big Fear Itself event, and he has several Iron Man comics coming out with him all over them. Iron Man 2.0 is a good way to read about other Iron Men if Tony isn’t really your thing. Otherwise, Invincible Iron Man is your safest choice on the stands. 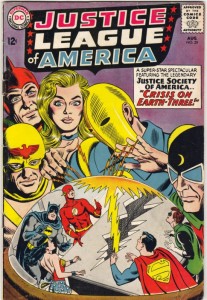 Oh the Justice Society! Ya gotta love a crossover. This story also includes Earth-Three with the evil superheros! They go into heavy detail to establish how different Earth-3 is (Lincoln survived! England won Independence from the US! Cats are dogs and up is down! (not quite on that last one but you get the idea!) The Crime Syndicate is always a fun concept to me, and the crossover between all the worlds is actually a really enjoyable story. I just ignore that Snapper Carr was in this issue at all. The Justice teams must travel through worlds in order to stop the Syndicate, and this is about as traditional of a crossover as you can get. It’s a “to be concluded” story, but it’s such a fun story how can you not get the next issue? More info can be found HERE

Let’s see… the Justice Leagues has it’s own comic that is not bad. The Justice Society has taken a step back, but apparently James Robinson and Nicola Scott will be writing a new story about them soon. And the best place to find the Justice Syndicate is probably in JLA: Earth-2 by Grant Morrison.

And that’s it! I’m too sleep deprived to have anything clever to say. Maybe I’ll try to re-read that Iron Man story someday, but probably not (seriously, what was going on there?)

This entry was posted in Reviews and tagged House of Mystery, Iron Man, Justice League of America, Martian Manhunter. Bookmark the permalink.