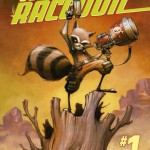 Rocket Raccoon #1 — Writer/Artist: Skottie Young Legendary Star-Lord #1 — Writer: Sam Humphries;  Pencils: Paco Medina;  Inks: Juan Vlasco Marvel’s milking their Guardians of the Galaxy franchise hard, with two new ongoing series starring individual members out this week, but they’re doing a good job of it — both books are worth a look. Rocket Raccoon is the best of the two, because Young’s art is such a wonder: fans know him from his “little kid” alternate covers to a bunch of Marvel titles over the last few years, and from his work on the various Oz books, and … Continue reading → 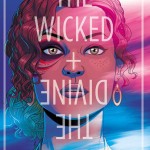 The Wicked and the Divine #1 — Writer: Kieron Gillen;  Art: Jamie McKelvie Iron Man #28 — Writer: Kieron Gillen;  Pencils: Joe Bennett, Cliff Richards and Derlis Santacruz;  Inks: Scott Hanna and Rick Magyar Gillen’s one of the better writers in comics right now, and his first big splash was Phonogram — especially the second volume, a multiple-perspective tale of one night in a dance hall, and the magical effects of the music played there on its listeners. That was a collaboration with McKelvie, too, and the team went on to create one of last year’s best mainstream series, Young Avengers; … Continue reading → 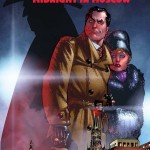 The Shadow: Midnight in Moscow #1 (of 6) — Writer/Artist: Howard Chaykin The Shadow’s one of those classic characters who attracts creators — Denny O’Neil and Michael Kaluta in the ’70s, and Chaykin himself in the ’80s — who see him as an effective springboard for slam-bang pulp adventure. This story’s set in 1949, a period whose fashions and people Chaykin has always loved to draw (Satellite Sam, his other current work, is set the same era — and written by Matt Fraction, who knows full well how to keep his artists happy), and watching him set up his plot, craft … Continue reading → 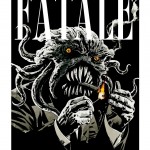 The New 52: Futures End #1 (of 52) — Writers:  Brian Azzarello, Jeff Lemire, Dan Jurgens and Keith Giffen;  Art: Patrick Zircher This is yet another week with a bunch of first issues; most are either Marvel, Image or smaller publishers, but let’s start with DC’s second weekly comic. It helps a lot if you come into this having read the Free Comic Book Day Futures End #0, since that sets up the premise — the DC Earth of 35 years from now has been taken over by Brother Eye (in this continuity, created by the New-52 version of Mr. … Continue reading →