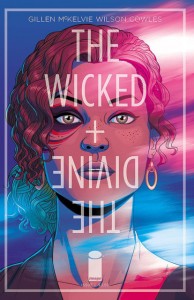 Gillen’s one of the better writers in comics right now, and his first big splash was Phonogram — especially the second volume, a multiple-perspective tale of one night in a dance hall, and the magical effects of the music played there on its listeners. That was a collaboration with McKelvie, too, and the team went on to create one of last year’s best mainstream series, Young Avengers; now they’re back with another story about music, but this one’s about the magical effects on the performers, not the audience: a dozen kids get to be pop stars, and avatars of gods, but the catch is 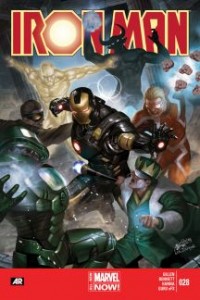 that it’s only going to last a few years, and then they’ll die. This, of course, works as a Big Metaphor for the creative process, and there’s a danger that it’ll get too pretentious, but I trust this team: Gillen’s good at walking the tightrope between meaningful and entertaining storytelling, and McKelvie’s art gets more expressive, precise and fashionable with every book he draws. Get in on this book early: it’s going to be good. As one door opens, another closes: Iron Man #28 is Gillen’s last issue of that title, one he’s written since its relaunch. He’s said in interviews that he made a recent decision to leave the book because another Marvel title became available, one he couldn’t resist (no, he hasn’t said which one yet…), and that the events in the Original Sin crossover this summer offered a perfect time to wrap up his run on Tony Stark and company. There’s a slightly rushed feeling to this last issue, as all the wandering plotlines get wrapped up and put back into the toybox for the next writer, but this has been an entertaining run, and this final year’s arc, focusing on the rings of the Green Lant — er, Mandarin, has made an entertaining swan song. 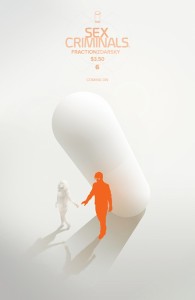 The collection of the first five issues of this comic hit #1 on the New York Times best-selling list for graphic novels this spring, and deservedly so: it’s a very human, funny and occasionally thought-provoking book about two people whose orgasms stop time (literally), and how they get together, decide to use their power to rob a bank, and then find out they aren’t the only ones with their particular talent. This issue is the first of the next arc, and focuses on Jon, the guy of the pair, as he deals with issues of medication, guilt, and what to do after the initial excitement of a new relationship starts to settle into a routine. If you’ve never read this series before, don’t start with this issue: as a first episode of a second chapter, it’s not all that funny or exciting, frankly, although it’s done smoothly and well, and lays a lot of necessary groundwork for what’s to come. Instead, get the collection, get to know and appreciate the characters, and then start in with the new books; you’ll understand why this series has received so much good press much better that way. 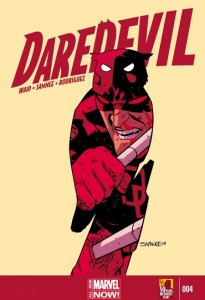 Not that much to say about this book, except that it’s Waid and Samnee, it’s a good, crisply-done comic that was one of the first to tap into the retro/fun/pop sensibility that’s driving a current mini-Renaissance at Marvel, a year or two before all the initial Marvel Now! launches, and it, too, might not be the best place to start if you’ve never sampled it: it’s the last issue of the first arc of the new title, so get all four instead — or, better yet, one of the trades that collect the team’s previous run on the character; that will give you a much fairer sample of what makes it such a fun read.. 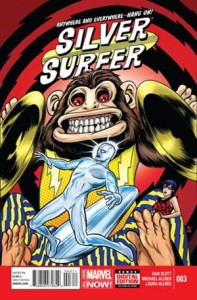 This is a more recent Marvel Renaissance example (it just started two months ago), but its combination of very good art,  fun-not-grim storytelling and confident, here’s-what-works view of its main character link it firmly with titles like Daredevil, Hawkeye and She-Hulk. Slott and Allred are co-listed as “storytellers” here, so I’m thinking that Allred is contributing quite a bit to the plotting/character end, too; the Surfer’s combination of cockeyed innocence and casual competence recall his Madman, and so does some of the cosmic, pop-art weirdness. Slott, who’s always been a solid-but-not-startling script-writer (although, as the main writer on Amazing Spider-Man for a number of years now, he’s always handled humor well), appears to be a good match for him; every once in a while, I get the feeling that this is trying a little too hard to be offbeat, but generally one grounded creator plus one far-out one equals just the right combination of sensibilities for a cool comic here. 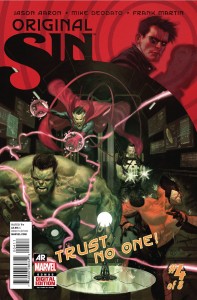 Ah… the events of last issue take an unexpected (and welcome, plot-wise) turn, and the various smaller groups of heroes begin to come together to try to figure out who murdered the Watcher, took his eye and is now exposing a bunch of Marvel characters’ long-buried secrets. This isn’t a simple story (the summary of the first three issues at the beginning takes up three dense paragraphs), but Aaron is handling it cooly and stylishly, and Deodato’s shadowy, well-composed visuals continue to provide just the right art for the sinister goings-on; I’m not sure whether all the various tie-ins are necessary (although the upcoming Iron Man/Hulk ones look interesting), but at its halfway point this mini-series event itself is proving to be a fun roller-coaster ride. 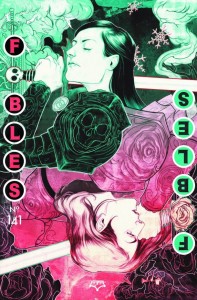 These series are linked in that both have been well-received by both readers and critics, and are currently in their final arcs; Fables has been around longer (over ten years now), although it’s Fatale that’s ending sooner, with only one issue left after this one. Fables, with its use of fairy-tale characters in the “real” world, was clearly ahead of its time (it predated TV’s Once Upon a Time, which takes the same conceit and goes in different directions with it), and Willingham has been there for every 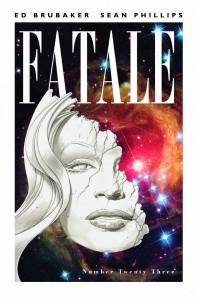 issue (Buckingham and Leialoha, on the art side, have been there for most, too, although they’ve had occasional breaks); the team’s always shown a lot of affection and imagination in dealing with its central band of characters, and it’ll be interesting to see where they all end up. Fatale‘s always been a high-concept book, too (its combination of crime noir and Lovecraftian horror is an inspired mashup of two pulp staples, yielding a mysterious, ageless title heroine whose effect on men is both occult and genetic: she’s, literally, drop-dead gorgeous), and while its two-year-plus run hasn’t been as impressive as Fables‘, it’s been equally entertaining; both will leave an impressive library of their collected stories for future readers to discover and enjoy. 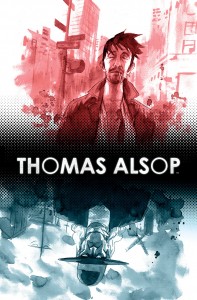 This new book combines magical and crime threads, too: the title character is a John Constantine-like occult private eye; he lives in NYC, and he’s the “hand of the island” of Manhattan, with members of his family responsible for dealing with mystical threats to it since the 1600s. This first issue offers a lot of setup and backstory, with Schmidt offering a loose, sketchy line that’s capable of handling both the modern and the historical sequences well; his use of an almost-black-and-white art base, with very effective, subtle additions of color, shows a welcome restraint among today’s computer-colored, often-too-glaring books (and, since no one else is listed, I assume he provided the color, too). The title is, unfortunately, too bland (although Miskiewicz explains why it’s that way in the editorial material), but this looks like it’ll be a welcome addition to its genre. 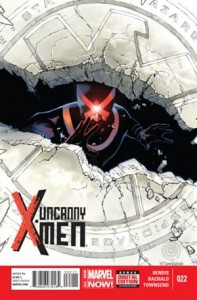 We’re heading into not-much-new-to-say territory on a couple of these: Uncanny reaches a conclusion point to its current story (yes, Bendis stories do sometimes actually end), as SHIELD and the X-Men fight, the mysterious mastermind behind most of the group’s current problems is revealed, and there’s a pretty literal deus ex machine to help wrap things up. I’ve been going through a lot of Uncanny back issues the last few weeks, and have to say that, especially with the Bachalo art, this current relaunch has been one of the better runs for the group since the Claremont years (good lord, some of that ’90s stuff does not hold up at all well…). 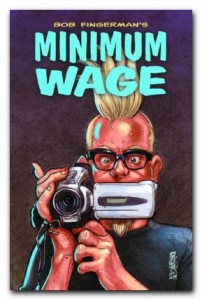 Not much to say on this, either: by now you’ve either checked out Fingerman’s well-drawn, caricature-rich, R-rated slice-of-life tales of a struggling, 20-something New York City cartoonist, or you haven’t. This issue is the end of the book’s “first season” (with the next one slated to start next January), and a good example of its many charms; loosely based on Fingerman’s own adventures, it’s like a male-centric version of early Sex and the City. 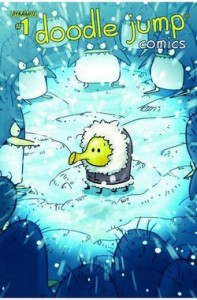 Not to be outdone by the recent Angry Birds comic, Dynamite offer this all-ages adaptation of a slightly-earlier mobile video game (yes, it’s been around for a little over five years now). Like Angry Birds, it’s not particularly sophisticated, but it’s less preachy and more surreal than that book, and not a bad option for younger readers (or those not quite old enough to be readers themselves). 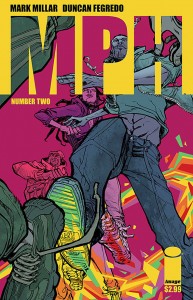 So, um, yeah: typical Millar book: interesting first issue, with a cool emphasis on super-speed from the speedster’s perspective (with the world in almost-frozen slo-mo, like the Quicksilver prison break-out sequence from the current X-Men movie), and then a second issue that basically just repeats the first, but with more characters doing it. Pretty thin content, but it’ll probably get optioned as a B movie soon (Secret Service was an equally-thin super-spy-movie riff, and there was a trailer for that right before the X-Men movie, so Hollywood clearly likes what Millar is doing in these mini-series).

With 40 years of experience in comic reading, collecting and reviewing, English Professor Phil Mateer has an encyclopedic mind for comics. Feel free to ask Phil about storylines, characters, artists or for that matter, any comic book trivia. He will post your questions and answers on the AABC blog. His knowledge is unparalleled! He is also our warehouse manager, so if you are looking for that hard to find comic book, ask Phil!
View all posts by Phil →
This entry was posted in New Comics, Reviews and tagged Daredevil, Doodle Jump, Fables, Fatale, Iron Man, Minimum Wage, MPH, Original Sin, Sex Criminals, Silver Surfer, The Wicked and the Divine, Thomas Alsop, X-men. Bookmark the permalink.