The Shadow: Midnight in Moscow #1 (of 6) — Writer/Artist: Howard Chaykin

The Shadow’s one of those classic characters who attracts creators — Denny O’Neil and Michael Kaluta in the ’70s, and Chaykin himself in the ’80s — who see him as an effective springboard for slam-bang pulp adventure. This story’s set in 1949, a period whose fashions and people Chaykin has always loved to draw (Satellite Sam, his other current work, is set the same era — and written by Matt Fraction, who knows full well how to keep his artists happy), and watching him set up his plot, craft his settings (New York City here, London next issue and, if the title is to be believed, eventually Russia), and conjure his characters and action, is a pleasure: he’s one of comics’s most experienced and able storytellers, at the top of his game and having obvious fun, and this is a mini-series not to be missed. 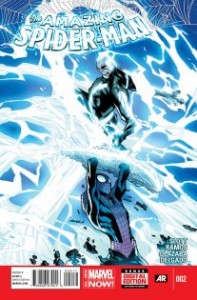 It’ll be interesting to see how many copies this second issue sells, since the first one hit half a million. I like the way Slott and company refuse to take the easy, expected, darker path of having Spider-Man an outcast or hunted; instead, everyone accepts the “Doc Ock switched brains with me” explanation as though it were the most natural thing in the world (which I suppose, in the Marvel universe, it is), and then moves on; I also like Ramos’s slightly-cartoony art, which works particularly well on Anna, on Spidey in costume, and on the earnest, quadrilateral-jawed Captain America. Since this is only on issue two (with, as noted, plenty of issue ones — and the last issue of Superior Spider-Man, #31 — also available), this is a great time to get in on the beginning of what promises to be a high-energy and affirmative run for this character. 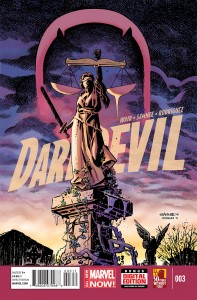 One of the earliest of the new “fun” Marvels, which is to say titles that can occasionally be grim, but never for long, and always show affection for the characters and have their best interests at heart (the resolution of the “What happened to Foggy?” subplot here shows that). Most DCs right now seem pretty gloomy as a default setting, but this, Amazing, Hawkeye, the new Secret Avengers, Silver Surfer, She-Hulk, Ms. Marvel and Loki, Agent of Asgard  all have a kind of brisk, competent energy that makes readers feel like they’re in good hands, in both script and art: watch Waid and Samnee, now a long-standing team on this title, to see how it’s done. 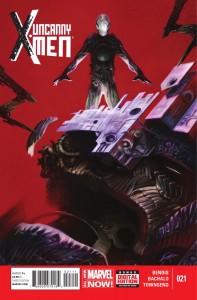 People sometimes bag on Bendis —  like they did with later-era Claremont, when his little narrative tics and tricks were so familiar that they were easy to parody — but it’s easy to forget, with both writers, just how easily they keep us caring about the characters, hearing their voices precisely and watching their relationships, keeping a dozen plot plates spinning and the soap-opera pot boiling. That’s pop fiction at its core, and when Bendis is doing it with a cool, experienced artist like Bachalo, whose portrait designs and panel compositions are always attractive, playful and interesting — it’s hard to resist. 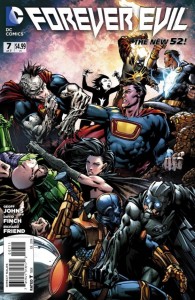 So, the Forever Evil mini-series finally ends; between its length (and, remember, there was Trinity War before it as a prologue, so it’s been going on well over a year) and its lateness, it arrives with a definite air of anticlimax about it. That’s too bad, because on its own terms it’s a nice-looking and well-written book, with a number of Johns’s patented continuity-rich reveals and twists, and a 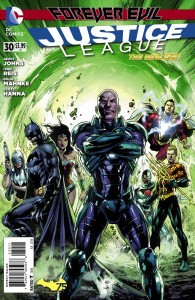 last-page next-villain setup that’s a clever tribute to one of DC’s anniversaries this year. It also establishes a new status quo, as a number of other titles, dammed up behind it until its completion, will now start pouring out; the first is Justice League #30, whose cover shows the biggest change: Lex Luthor now leads the JLA. How? Why? Read this after Forever Evil, and it will all make sense. Sure, it’s gimmicky, but Johns is one of the few DC writers — other than Scott Snyder and a few others over on the Bat-titles — who can create and sustain reader interest, and the fact that we can’t help but be intrigued by jaw-dropping developments like these shows how adept he is at pressing our fan buttons. 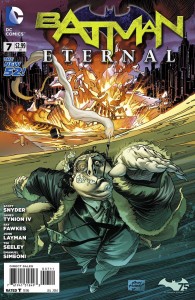 DC’s two weekly books: Batman: Eternal continues to be a pretty-good Bat-story, with the weekly publication allowing for a big, shifting cast of Gotham City characters — Gordon, Catwoman, Penguin, Batwing, Jim Corrigan and Professor Pyg so far — to fight, interact and each get some chance in the spotlight, with a story that’s reasonably focused and interesting. Futures End (the English teacher in 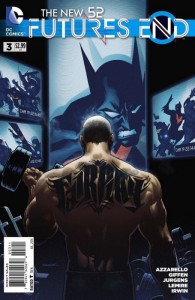 me is interested by the lack of apostrophe: not “Future’s End,” which would mean “the end of the future,” or even “Futures’ End,” which would mean “the end of more than one future”? That would make “end” a verb instead of a noun, with a meaning of “futures are going to end,” right? Unless the actual meaning is “DC editors are illiterate….), because it’s set a couple of years ahead of current continuity, has a harder time generating interest, since it doesn’t feel “real” — Ok, so the near-future Green Arrow gets killed: we know that isn’t going to last, so why worry about it? It’s nice to see the Batman Beyond character outside of his own future timeline, but otherwise there’s a built-in apathy to this title that it’s going to have to work hard to overcome.

Marvel’s contribution to the summer crossover festivities seems much smaller in scale than DC’s — it’s one murder mystery (even if the dead character has been around a long time), not a company-wide slugfest, and the theme of closeted skeletons coming back to haunt present-day heroes lends itself more to small individual moments than the kind of world-changing plot twists that Johns specializes in. Aaron continues to be good at straddling the divide between eerie solemnity and just plain weird (his B-movie sensibilities help), although Deodato sometimes struggles with it: more visual humor would help to acknowledge the absurdity of twists like the last-page character reveal, but he’s too straight-ahead superheroically serious to deliver the required tone. Still, that’s some pretty pencilling, especially on the multi-character set pieces. 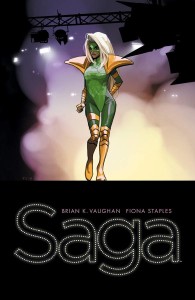 This very popular series returns after a brief hiatus (every six issues equals one graphic novel, plus a couple of months off for the creative team), and its sf alien-war variation on Romeo and Juliet continues to impress; between Vaughan’s ability to keep us interested in multiple characters (although it’s the core family that gets most of the attention this issue, as it picks up a couple of months later in their lives) and Staples’s casually-gorgeous art, it’s no wonder that this book has attracted so many fans. 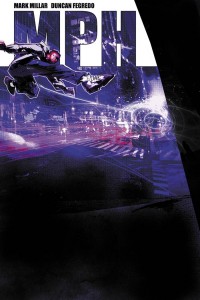 Millar’s really good with beginnings; every new series from him has an intriguing premise, and this one about a not-very-bad prisoner who takes a drug that gives him super-speed powers is no exception: I like using the character’s perspective, so that, instead of using a bunch of speed lines to make him appear fast, everyone around him appears to be standing still instead. There’s still the way that everyone talks in Millar speech (lots of cynicism and run-on sentences), and the fear that it will all eventually devolve into cliche and slapdash conclusions, but for now I’m happy to sit back and watch what happens next. 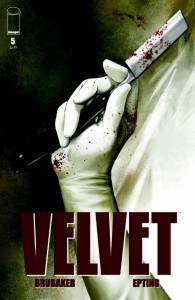 Brubaker and Epting continue their tribute to the late-’60s spy-thriller craze, with more on the origins of the main character, and an O. Henry-like relationship in her past that may help to explain her present-day predicament. Very smoothly told, with Brubaker’s usual noir sensibility. Reading this and comparing it to his Fatale, I was startled at how most of the characters, especially the women, smoke all the time; it’s true to the period, and Epting makes it look especially sexy, which is also true to the genre (noir films were in the ’40s, in black and white, and cigarette smoke offered lots of opportunities for cool contrasts of light, shadow and tone), although I can’t help but consider how, in real life, someone Velvet’s age, after a lifetime of a habit like that, would be hacking up a lung by now, instead of continuing to look drop-dead gorgeous….

With 40 years of experience in comic reading, collecting and reviewing, English Professor Phil Mateer has an encyclopedic mind for comics. Feel free to ask Phil about storylines, characters, artists or for that matter, any comic book trivia. He will post your questions and answers on the AABC blog. His knowledge is unparalleled! He is also our warehouse manager, so if you are looking for that hard to find comic book, ask Phil!
View all posts by Phil →
This entry was posted in New Comics, Reviews and tagged Batman Eternal, Daredevil, Forever Evil, Future's End, Justice League, MPH, Original Sin, Saga, Spider-man, The Shadow, Velvet, X-men. Bookmark the permalink.