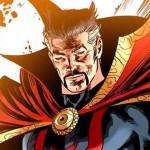 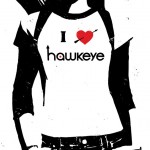 Hawkeye #9 — Writer: Matt Fraction;  Art: David Aja This continues, in its quiet little way, to be one of the best monthly comics out there — while it’s not like much happens this issue (a couple of the tracksuit Russian mobsters get beaten up, but otherwise the only major action occurs on the last page), it’s a perfect little glimpse into the life of its stubbornly adolescent hero and the five women in his life. Aja continues to be just the right artist for it, too: everyone’s immediately distinguishable, even with Fraction’s “no costumes on anyone” rule, and the … Continue reading → 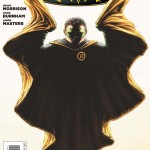 Batman Incorporated #8 — Writer: Grant Morrison;  Art: Chris Burnham and Jason Masters If it seems a trifle unfair to be reviewing a book you can’t buy (since it’s sold out, thanks to DC’s publicity machine and national media exposure), don’t despair — there’ll be a second printing soon. I’ll assume that no spoilers are needed for the plot development, since the cover itself tells the tale — although it has to be pointed out that Morrison’s Batman: R.I.P. story did not actually kill Bruce Wayne, and that, when he was “killed,” weeks later in Final Crisis, that death didn’t … Continue reading →

Avengers #3 — Writer: Jonathan Hickman;  Art: Jerome Opena Uncanny Avengers #3 — Writer: Rick Remender;  Art: John Cassaday Young Avengers #1 — Writer: Kieron Gillen;  Art: Jamie McKelvie with Mike Norton Three Avengers-related books this week, so let’s start with those: Avengers is the conclusion of the book’s first arc; you have to admire Hickman for only making it three issues, and not stretching it out to the more-usual trade-sized six, although his writing is dense enough to make the story seem longer.  Maybe a little too dense (I’m never quite sure about Hickman’s plots, and this one resolves … Continue reading → 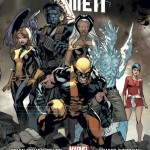 All-New X-Men #2 — Writer: Brian Michael Bendis;  Pencils: Stuart Immonen;  Inks: Wade von Grawbadger New Avengers #34 — Writer: Brian Michael Bendis;  Art: Mike Deodato Two by Bendis, a beginning and an ending. The X-Men is the second issue, and after all the set-up of the first it actually takes off and offers an intriguing look at the teenage X-Men, brought from the past by a dying Beast to try to talk sense into the current Scott Summers. This is the very definition of “high concept,” of course, but, eye-rolling aside, it works very well — what fan can … Continue reading →