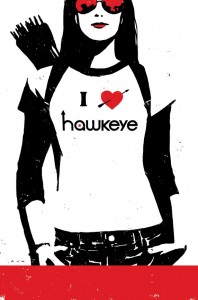 This continues, in its quiet little way, to be one of the best monthly comics out there — while it’s not like much happens this issue (a couple of the tracksuit Russian mobsters get beaten up, but otherwise the only major action occurs on the last page), it’s a perfect little glimpse into the life of its stubbornly adolescent hero and the five women in his life. Aja continues to be just the right artist for it, too: everyone’s immediately distinguishable, even with Fraction’s “no costumes on anyone” rule, and the faces convey all the flickers of emotion that Fraction’s subtle scripts demand, while the cover, as always, just makes the book leap from the stands. Don’t try to resist it; if you haven’t tried Hawkeye yet, this issue is a great place to start. 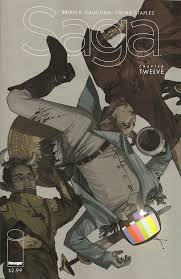 Another (fairly) quiet issue of a great ongoing series, with an effective (and affecting, thanks to Staples’s art) four-page opening flashback sequence involving the TV-headed prince, and then a long conversation with a pacifist author and a last-page cliffhanger reveal to bring readers back in a few months, when the next six-issue arc begins. Doesn’t sound like much? Read it and see just how easily Vaughan and Staples can ensnare you in their narrative, and make you care what happens next. 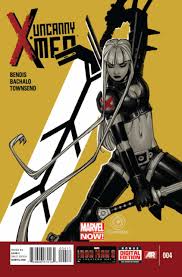 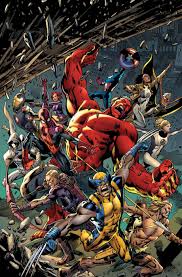 Two by Bendis, plus a couple of tie-ins to the Ultron event. Uncanny X-Men comes first, since it’s unconnected to the others; it isn’t quite a stand-alone book, though, because it’s offering an echo of the last issue of All-New X-Men: that comic’s confrontation between Cyclops’s team and the regular Jean Grey School crew, but from the Uncanny group’s perspective. It’s a clever way to tie the books together, and to expand on the characterization there, especially between Emma Frost and the Stepford Sisters. 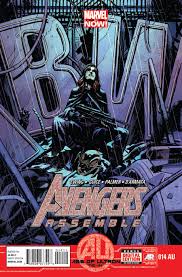 There’s also a look at the new kids in their home base (inadvertently discovering the Danger Room), and hints of something wrong with Magik, all drawn in Bachalo’s attractive, impressionistic style (between the impressionism and the new-kids-discovering-their-powers hooks, this reads a lot like a Claremont/Sienkiewicz New Mutants comic from the ’80s — not a bad thing at all).  Meanwhile, Age of Ultron, now at the halfway point, finally gets all its actors together and reveals its main plot thrust: an attempt by part of the remaining heroes to travel into the future to stop Ultron there, while Wolverine has decidedly opposite plans. With an apocalyptic story like this, there was always going to be a 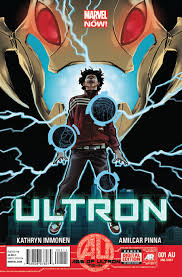 big reset button,  although how it will play out is anyone’s guess; place your bets now on what (and who) will be visited by the time-traveling Retcon Fairy.  Then, of the two tie-in books, Secret Avengers has the most connection to the main tale: it shows how the Black Widow, in San Francisco when Ultron first shows up, gets from there to her appearance in the main title (hint: it involves lots of heart-tugging, machine-induced death); fans of the Bronze Age Champions book will note a lot of Easter eggs and callbacks to it in Ewing’s script, while the Guice/Palmer team offers very solid art to support it. Ultron is kind of a bait-and-switch; it’s not about the main villian, but about his “son,” the cyborg he created, Victor Mancha, who was part of the Runaways title, and his struggles to help people in the post-Ultron-apocalypse world. Things go badly, as you might expect (it’s not like a tie-in is going to offer any resolution to the main event), and this ends up with much the same as the other tie-ins in its emphasis on the helplessness of the situation, and the sacrifices of its title hero. 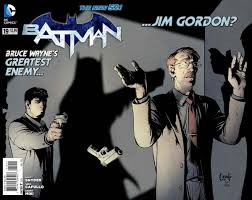 So, DC’s books this month all involve fold-out covers, with twists designed to pull in readers: Batman‘s WTF? moment can be explained by noting that the focus villain is the old Bat-foe… well, naming him would be a spoiler, so you’ll just have to see; it’s the first

installment of a new serial, and doesn’t promise the pizzazz of the previous Joker one, but the Snyder/Capullo team continues to make it worth reading. There’s also an eight-page backup with a Superman/Batman team-up involving the supernatural, noteworthy because the art’s by Alex Maleev. Batman and Red Robin (because, you know, the previous “Robin” is sort-of dead…) introduces the “new” character seen on its WTF? cover, and does a reasonable job of it; there’s another plot involving Batman capturing and dissecting Frankenstein, to see what makes him tick in order to try to bring Damian back to life, that’s not as successful (it requires Bruce Wayne to be too out-of-character psychotic, even given the circumstances, although it gets points for some nice visuals). For a normally second-tier Bat-book, this has enough gonzo moments to make it worth picking up. 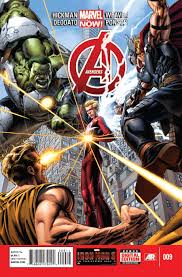 Two of the four Avengers franchise titles this week (Secret Avengers was already covered, while Avengers Arena came out too, and involves something of an origin for the current version of Arcade, but there isn’t much more to say about it). The regular Avengers continues to pile up the new characters and subplots, here mostly involving Marvel-earth versions of the New Universe-related Starbrand and Nightmask; nine issues in, 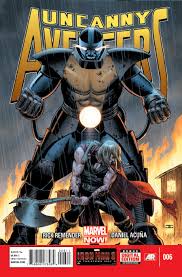 this book is still intriguing, but everything that Hickman’s doing is so connected, so crisscrossed with hints of worldwide creation and destruction and broken universes (the end of this book hints that it’s all tying in with New Avengers, and its similar plots, too), that it’s becoming too unwieldy for readers to hold in their heads. A couple of one-off issues, and smaller targets, would be a nice chance for everyone to catch their breaths. The same goes for Uncanny Avengers; although Remender’s a lot better at limiting his arcs (and this issue is a one-off, involving a long-ago confrontation between Apocalypse and Thoior), there’s still so much going on in this title — the Red Skull still on the loose, while now we have Apocalypse, Kang and Asgardian plots spinning — that readers may long for some simpler fare. 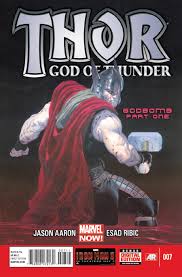 Three more Marvel Now! relaunches, at various stages: Thor is the furthest along, but so far it’s all been one big story, involving the God-slayer Gorr and his encounters with past, present and future versions of Thor, as they all attempt to stop him from his overall goal of killing all the gods in the 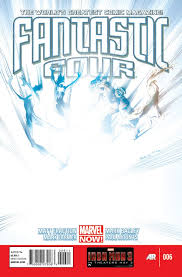 universe. That’s suitably cosmic, and it’s been kind of fun, in its moody way, but after seven issues (and with no end in sight) it’s getting old, too: frankly, this guy just isn’t interesting enough for a year-long sequence. Fantastic Four is in the middle of a similar year-long tale, as the FF travel through space and time in search of adventure (and Reed looks for a cure to a breakdown in their powers); the difference is that Fraction’s pretty good at making each issue a self-contained story while still moving the main subplots along, so they seem much more like satisfying episodes instead of merely 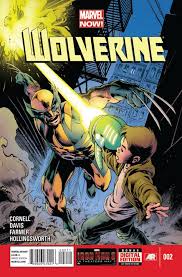 chunks of a never-ending serial. Wolverine, on its second issue, is still too early into its first story to tell whether it will follow more the Aaron or the Fraction model; Cornell’s proven adept at focused storytelling in the past, so here’s hoping the first arc doesn’t overstay its welcome. The Davis art is solid, and a good match both to the writer and the character, although his Neal Adams influences get a tad overbearing at times; one or two of the faces here, especially, made me wonder whether I’d wandered into a ’70s Batman book by mistake.

With 40 years of experience in comic reading, collecting and reviewing, English Professor Phil Mateer has an encyclopedic mind for comics. Feel free to ask Phil about storylines, characters, artists or for that matter, any comic book trivia. He will post your questions and answers on the AABC blog. His knowledge is unparalleled! He is also our warehouse manager, so if you are looking for that hard to find comic book, ask Phil!
View all posts by Phil →
This entry was posted in New Comics, Reviews and tagged Age of Ultron, Avengers, Avengers Assemble, Batman, Batman and Red Robin, Fantastic Four, Hawkeye, Saga, Thor, Uncanny Avengers, Uncanny x-men, Wolverine. Bookmark the permalink.