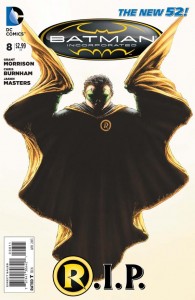 If it seems a trifle unfair to be reviewing a book you can’t buy (since it’s sold out, thanks to DC’s publicity machine and national media exposure), don’t despair — there’ll be a second printing soon. I’ll assume that no spoilers are needed for the plot development, since the cover itself tells the tale — although it has to be pointed out that Morrison’s Batman: R.I.P. story did not actually kill Bruce Wayne, and that, when he was “killed,” weeks later in Final Crisis, that death didn’t take either — so there might be hope for Damian Wayne yet. On the other hand, the six-page fight sequence here, involving four or five different lethal blows, leaves little doubt that the character is dead (for now, anyway). It’s also very well choreographed and drawn by Burnham — in its balletic violence, in its shifts of perspective between monstrous mother, desperate father and defiant child, and in its use of panel size to break up the action, and speed and slow the passage of time. It’s a tribute to Morrison’s skills as a writer, too, that he created a deliberately-unlikeable character, gave him a satisfying emotional arc, and brought him to a point where readers will miss him and actually care about a death that, since he’s leaving the bat-books soon, will be permanent during his tenure on them, anyway.

Two by Fraction, both with differently-gorgeous art: Aja offers precise panel layout and a very controlled, sharp line, while Allred works with a more exuberant, flashy style; on the other hand, both have a knack for design, and for being able to convey volumes of personality with just a couple of lines in a character’s face — so they’re perfect for 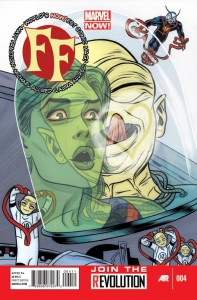 Fraction’s subtle emotional writing and action pyrotechnics . Hawkeye continues to be the mainstream superhero book of the year, each issue a self-contained exploration of its cockeyed hero, but with an overall story that’s now starting to accelerate as it becomes more clear. FF has a similar combination of individual spotlights (She-Hulk and Wyatt Wingfoot’s charming tentative date, and the kids’ attempts to sabotage it,  are the centerpiece here) and overall story crystalization, but readers can’t go wrong with either one of these; they fight for position at the top of my reading stack whenever they come out in the same week like this.

Two by Bendis — who, like Fraction, has a knack for pairing with talented artists. Bachalo may have the best-looking book of the week here; he isn’t precise in the way Aja or Allred is, but his generous, wide-open layouts, lush detail, and ability to draw attractive people make this a hard book to resist (whether such an obsessively-careful artist will be able to keep up an every-three-week 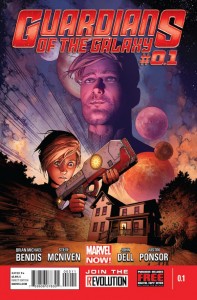 schedule without switching to layouts-only and a lot of inking help is a good question, and the fact that there are four inkers listed for this issue may not be a good sign — but man, there are some nice-looking comic panels and pages here. McNiven’s no slouch either, of course, and Guardians 0.1 (it’s numbered that way because it’s an origin story of sorts for the Peter Quinn Star-Lord character, with only a two-page splash of the whole team, including Tony Stark, thrown in at the end) offers a number of good-looking people doing lots of well-drawn things, too. Amazingly for a Bendis book — and unlike Uncanny X-Men — there are a lot of wordless panels, and only a couple of scenes of people standing around talking, in this comic, the better to appreciate the pencils, John Dell’s inks, and Justin Ponser’s accomplished coloring palette. 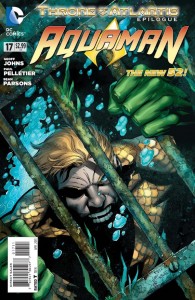 This picks up after last week’s Justice League “Throne of Atlantis” conclusion, with Arthur beginning to act like the King of the Seven Seas. Pelletier doesn’t have quite the chops of some of the other artists we’ve talked about here, but he can deliver big effects when he needs to, and Johns is careful to give him the chance: an early double-page splash is OK, but a later one, with Aquaman surrounded by sea creatures and doing his telepathic bit, is almost worth the price of the book (Johns, fanboy that he is, makes sure to include the “vuu vuu vuu” sound effect familiar to anyone who’s watched Aquaman talk to fish in the TV cartoons, too). 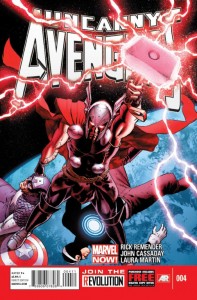 These last three are grouped together because they all involve good artists, too — all three have recognizable, individual styles, but a common attention to clear storytelling and eye-pleasing people and effects that make 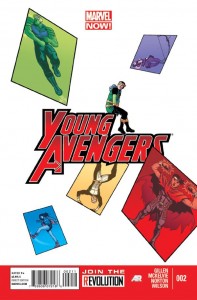 them a joy to look at. Uncanny Avengers finishes the Red Skull arc, and besides Cassaday’s well-drawn heroes and villains, there’s a lot of fun in Remender’s dialogue — the Skull’s rants about America as being a home of entitlement-seeking parasites and lazy halfbreed scum sound scarily persuasive (he’d be a hit with some of the nuttier Tea Party types). Young Avengers features the Gillen/McKelvie team pulling of a couple of startling effects (including a cool page with Kid Loki thinking, literally, outside of the box), and an effective plot involving its young protagonists realizing that

something is very wrong with their world, in a creepy Invasion of the Body Snatchers way that echos the suspicions of all adolescents that adults are secretly conspiring to brainwash them and keep them under control. Thunderbolts, on the other hand, offers lots of patented Dillon violence, including a sequence involving the Punisher and Elektra dispatching a number of unfortunate troops. The grimly gleeful expressions on their faces (not to mention the resigned horror from the unlucky cannon fodder), and their reaction afterwards, are just perfect; other things happen to other characters, too, but I’d buy a book just with those two crazy kids, as long as Dillon was drawing it….

With 40 years of experience in comic reading, collecting and reviewing, English Professor Phil Mateer has an encyclopedic mind for comics. Feel free to ask Phil about storylines, characters, artists or for that matter, any comic book trivia. He will post your questions and answers on the AABC blog. His knowledge is unparalleled! He is also our warehouse manager, so if you are looking for that hard to find comic book, ask Phil!
View all posts by Phil →
This entry was posted in New Comics, Reviews and tagged Aquaman, Batman Incorporated, FF, Guardians of the Galxy, Hawkeye, Thunderbolts, Uncanny Avengers, Uncanny x-men, Young Avengers. Bookmark the permalink.