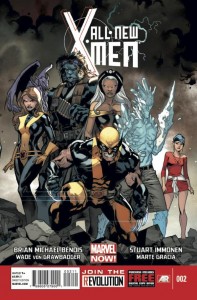 Two by Bendis, a beginning and an ending. The X-Men is the second issue, and after all the set-up of the first it actually takes off and offers an intriguing look at the teenage X-Men, brought from the past by a dying Beast to try to talk sense into the current Scott Summers. This is the very definition of “high concept,” of course, but, eye-rolling aside, it works very well — what fan can resist wondering what, say, Wolverine’s reaction to the young Jean will be, or how the idealistic kids will react to the currently-pretty-grim Marvel world, or how the two Icemen will relate, or what Jean will think of being dead, or…. well, there’s a ton of cool ideas there, and fortunately this issue indicates that Bendis is going to cover them well. Immonen’s art does a great job of distinguishing the gritty present from the more hopeful past; he draws the X-kids with a sharper and cleaner line, setting them off effectively from their more-scruffy adult selves. I wouldn’t have said so after the first issue, but it looks like this idea is just crazy enough to work. 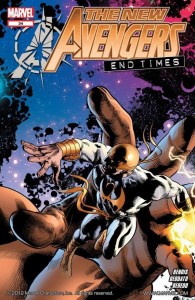 The New Avengers is the final issue of the run, and Bendis’s last, so it’s a double-sized putting-the-toys-back-in-the-box closer. It’s not bad — I’m not sure that Doctor Strange battling the dead ghost brother of dead Brother Voodoo deserved four issues, but the dilemma of fighting someone who can inhabit all your superfriends and make them pound on you offers some drama; I like Bendis’s way of listing the various spells that Strange uses, and the resolution is satisfying. Even better is the resolution to the Luke/Jessica relationship and membership — they’ve been a couple since Bendis’s underappreciated Alias book, and the setup for a possible new title with them (and live-in nanny Squirrel Girl) makes me want to buy it. Yes, this title lasted 34 issues, and because of its drawn-out storytelling it only had about 10 issues of actual plot, but in retrospect those were 10 pretty good issues, and it manages to end on a high note. 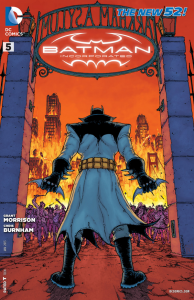 We go back to the future here, the one from Batman #666 where an adult Damian is wearing the cowl, and has sold his soul to the devil to protect Gotham after the death of his father. This being Morrison, it somehow all ties in to current continuity too — the present Batman describes it as a vision, one that’s influencing his decisions as he works to prevent it from coming to pass. The real fun is watching Burnham draw the grim neo-Gotham landscape and characters, and realizing that, since it’s only a possible future, Morrison’s under no obligation to give anyone a happy ending. 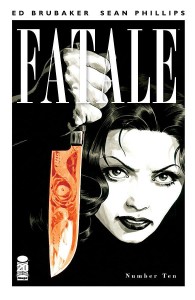 Speaking of unhappy endings… this book has been an intriguing combination of film noir and H. P. Lovecraft fiction, and since neither of those genres ever ends well, you just know that everyone but its ongoing (and, seemingly, immortal) title character is going to face a ghastly fate; as in Morrison, the fun is in seeing exactly how they get there. The art is by turns bloody, shadowy, horrific and sexy, but it’s always clear and very well-composed, and as the Brubaker/Phillips team concludes its second arc, it continues to be one of the best current collaborations. As with many good writers (Kirkman, Bendis, and Fraction in his indy stuff) the chatty, behind-the-scenes editorial material in the back of the book is a welcome bonus. 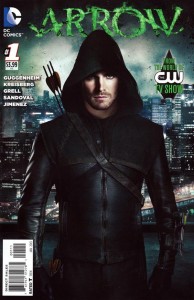 This is a collection of three ten-page previously-digital stories based on the TV series, and if you haven’t seen it online it’s worth it, mostly for the nostalgia of watching Mike Grell (whose ’90s version of the character is an obvious inspiration to the show) cover his origin in the first selection; the third chapter, which covers the origin of China White, is pretty good too. 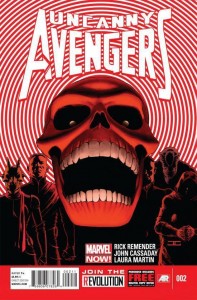 I suspect some fans may bitch about this issue because, after the first five pages, it’s only the Scarlet Witch and Rogue battling the Red Skull and a bunch of new super-villains (in a book with all those potential characters, and drawn by an artist like Cassidy, there’s some disappointment in not seeing more widescreen everybody-on-stage pyrotechnics), but give Remender a chance: he knows what he’s doing. This may be starting small, but his Red Skull is suitably chilling, the interplay between him, Rogue and Wanda is letter-perfect, and this is clearly building to an enormous climax in a couple of issues: as a six-part (or whatever) story, it’s going to be exactly the kind of opening salvo for the book that everybody wants. 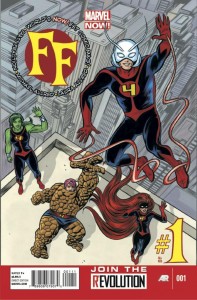 So, the idea is that the “real” FF is leaving for an interdimensional  journey in their own book (also written by Fraction). Reed swears that, because of time distortion, they’ll actually be back in four minutes, but just in case he wants a substitute team standing by. That consists of the Scott Lang Ant-Man, She-Hulk (the green one), Medusa, and… a girlfriend of Johnnie’s who’s, apparently, going to wear that old Thing exoskeleton from the ’70s and be “Ms. Thing.” Sound stupid? Don’t worry — it’s drawn by Allred, so it looks great, and Fraction knows exactly how to write to his strengths here. If you miss Allred’s X-Statix (and you should), this book will make you very happy. 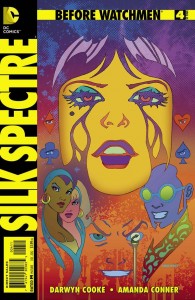 This is the only Before Watchmen book I’ve actually warmed to (even Cook’s Minutemen has been… eh, disappointingly tone-deaf and depressing), because Connor’s ’60s-California adventure of the young Laurie Jupiter is so human, so surefooted, and so wonderfully drawn that it washes away the bad taste of exploitation and greed that swamps all the others. 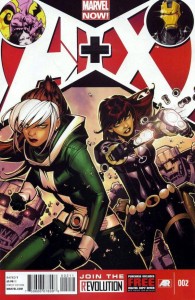 The David story, combining Kitty Pryde, Lockheed and Tony Stark, is typically well-constructed and funny, but it’s the Bachalo offering that’s the attraction here — it’s a Black Widow/Rogue teamup written and drawn by him, with dead-on characterization and… well, it’s 10 pages of Bachalo drawing Rogue and the Black Widow; what else do you want to know? 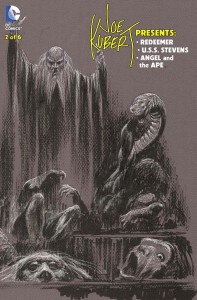 As in the first issue, 20 pages of Kubert (this time on the first half of his Redeemer story), plus two stories by Glanzman involving his semi-autobiographical WWII naval adventures (with the Buniak Angel and the Ape story thrown in as a palate cleanser), equals a bunch of classic art by two absolutely master craftsmen with over 100 years of professional experience between them. If you’re an artist, or just appreciate pretty pictures wed to solid stories, then get this book. 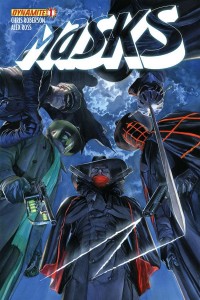 I should mention this book, since we got enough copies to warrant a special “AABC” variant, and it’s definitely worth buying, because it’s Alex Ross doing the whole issue, in his lush, painted style, and teaming up pulp heroes The Shadow, the Green Hornet, and the Spider — but I gotta tell ya, look at the pretty pictures and ignore the words, because the plot is a silly, inpenetrable mess. 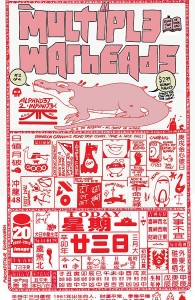 Graham’s the imaginative, surreal sf writer who’s made Prophet such a cult hit, and here he’s doing both art and story. If you saw his earlier King City, you know to buy this comic, but if not…. well, it’s another book where you should just trust me and buy it; it’s like the love child of Moebius and Geoff Darrow, and it’s a densely-packed, cartoony and clever story about a girl and her werewolf boyfriend on a road trip that you’ll be glad you read.

With 40 years of experience in comic reading, collecting and reviewing, English Professor Phil Mateer has an encyclopedic mind for comics. Feel free to ask Phil about storylines, characters, artists or for that matter, any comic book trivia. He will post your questions and answers on the AABC blog. His knowledge is unparalleled! He is also our warehouse manager, so if you are looking for that hard to find comic book, ask Phil!
View all posts by Phil →
This entry was posted in New Comics, Reviews and tagged A + X, All-new X-men, Arrow, Batman, Fatale, FF, Incorporated, Joe Kubert Presents, Masks, Multiple Warheads, New Avengers, Silk Spectre, Uncanny Avengers. Bookmark the permalink.