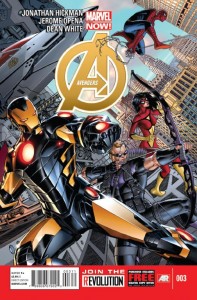 Three Avengers-related books this week, so let’s start with those: Avengers is the conclusion of the book’s first arc; you have to admire Hickman for only making it three issues, and not stretching it out to the more-usual trade- 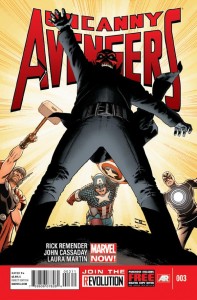 sized six, although his writing is dense enough to make the story seem longer.  Maybe a little too dense (I’m never quite sure about Hickman’s plots, and this one resolves thanks to a deus ex machina ex Captain Universe), but he’s good at planting seeds and having them pay off months later, as he showed in his Fantastic Four work, so I can give him the benefit of the doubt here. The good news is that there are lots of heroes and action, and everything looks good —  Hickman and Opena together have a flair for design, and special mention should be made of the coloring (by Dean White, Frank Martin and Richard Isanove); this is a very stylish-looking comic.  Uncanny Avengers has a much different feel: it’s louder, meaner and more spread out 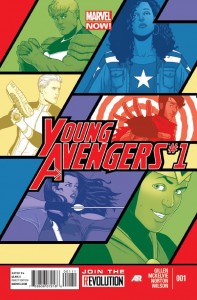 (the end of this third issue is clearly only halfway through the story), as the Red Skull, having grafted the dead Charles Xavier’s brain to his own, proceeds to beat the crap out of the Avengers and take over New York City. Cassaday and Remender make it grim fun (a panel showing Wolverine’s expression as he’s about to get squashed is priceless), and what it lacks in slickness it makes up in B-movie exploitation thrills. Young Avengers, by the reunited Phonogram team of Gillen and McKelvie, is the character-driven indy film to the big-screen pyrotechnics of the other two books: it takes the Teddy/Billy pair from the previous book and mixes in Miss America Chavez, Noh-Varr (previously Marvel Boy), and, best of all, the young Loki from Gillen’s wonderful former series, Journey Into Mystery. That’s a promising set of characters and a great creative team, and this first issue indicates that they’re going to blend to make a fun, readable comic.

So, the “real” FF have disappeared, and the substitute team of Ant-Man, She-Hulk, Medusa and a supermodel in a Thing exoskeleton are now dealing with a returned Johnny Storm, much older and with a bionic leg and hand, who tells a story of the extra-dimensional-traveling FF being destroyed by “Doom the Annihilating Conqueror,” a fusion of Doctor Doom, Kang and Annihilus, and how it took him years to make it back to their time/space period to tell the tale. Now what? Fraction’s proving very good here at setting up a whiz-bang story that whooshes along, playing exactly to Allred’s strengths, and the combination of traditional superhero action 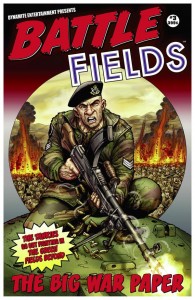 and over-the-top fun makes this one of the best of the Marvel relaunches so far.

Ennis’s war book; these are obviously a labor of love for him, well-researched and gritty and with a sympathetic eye to the troops (of all sides), and while he and Ezquerra don’t quite reach the gold standard of, say, Harvey Kurtzman’s Frontline Combat, they’re still creating the best war books since the ’60s and ’70s-era Kanigher/Kubert and Kanigher/Heath Sgt Rocks. 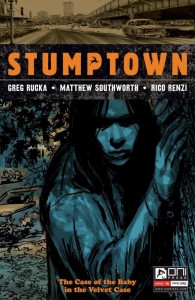 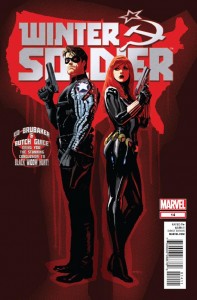 The end of the Brubaker Cap/Bucky era, after eight years. As a sentimentalist, I’d have preferred a happier conclusion, but have to admit that the bittersweet ending fits the book’s tone better, and leaves the character ready for the next creative team. Not that I expect much from them: this has been Brubaker’s baby from the start, with he and Guice meshing their talents just so, and it’s doubtful that anyone else will be able to do more than make this into a Nomad-type book that limps along for a while, and then gradually disappears (but hey, Jason Latour and Nic Klein: I’ll give you a couple of issues, so please prove me wrong…). 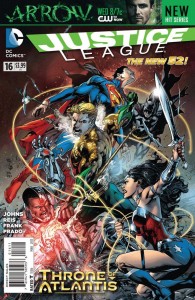 Chapter Three of “Throne of Atlantis,” as Wonder Woman, Batman and Superman confront Aquaman, who’s trying to referee between them and an invading Atlantean army who’ve already killed a number of surface dwellers. This is the kind of high-concept throwdown that Johns is good at (although it also shows one of his weaknesses: character is sacrificed to plot, as the Big Three have to all act like buttheads for the confrontation to work) and Reis is good at the widescreen pyrotechnics necessary to make it all pop visually, so the result is a satisfying episode that advances the ongoing story, and leaves the reader wanting more. 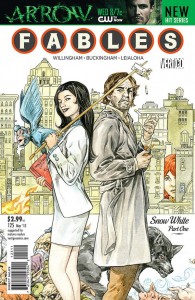 Stuff I bought and liked, but don’t have much new to say about (especially since I spent so much time writing this week’s “It Came From the Back Room” post that you should also be reading, assuming you’d like to get some amazing bargains on thirty years of Avengers back issues), so read previous reviews in the archives if you’re interested: 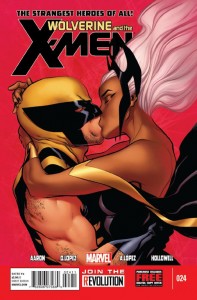 With 40 years of experience in comic reading, collecting and reviewing, English Professor Phil Mateer has an encyclopedic mind for comics. Feel free to ask Phil about storylines, characters, artists or for that matter, any comic book trivia. He will post your questions and answers on the AABC blog. His knowledge is unparalleled! He is also our warehouse manager, so if you are looking for that hard to find comic book, ask Phil!
View all posts by Phil →
This entry was posted in New Comics, Reviews and tagged Avengers, Battlefields, FF, Justice League, Stumptown, Uncanny Avengers, Winter Soldier, Young Avengers. Bookmark the permalink.