The Latest and (Mostly) Greatest #21

Let the records show, I finished this early.  It’s going to be a very busy weekend, but I can’t fail you humble readers! Let’s do this! 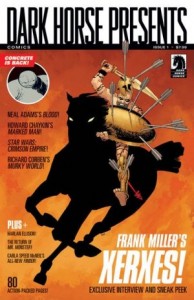 So yeah, this was really, really rad.  It starts with a pretty good Concrete story, “heads” to a strange Howard Chaykin story, and “leads” to a weird Neal Adams story.  And that’s just the first 25 pages.  AND THERE ARE 80 TOTAL.  The Adams story is, of course, weird cuz’ he’s written it (oy vey.)  There were also sneak peeks of upcoming series, other strange ones (I don’t know Mr. Monster that well, that’s way more the Professor’s area), and the final two pages had me actually laugh out loud to show manager Eddie.  This is a great first issue, with a great set-up, and it actually has me excited to see where it’s going to go.  It could be the next big thing, and even with the high price, it’s completely worth it.

Hey! Speaking of crazy!… here’s this story still going in directions that you can’t even begin to imagine.  The schizophrenic Domino (probably the first time I liked the character) changes her personality when she can’t handle the married life with Deadpool.  She goes off (not really being pregnant) to murder fat people. Because her dad was bad, or something… ya know, I can’t possibly explain this comic well, and I’m just trying to get enough words written to fill in the right space.  It’s a completely insane comic, written by an utter madman and drawn by a guy that I believe is secretly just as crazy.  Worth it! 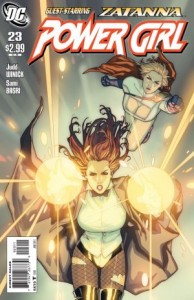 I couldn’t remember why I liked this comic at first.  Then I opened it up and saw the magic dinosaurs, and I remembered.  Since Palmiotti, Gray, and Conner left this title, it has been strictly…OK (which is better than I expected).  This issue was really pretty sweet.  Power Girl and Superman try to fight magic dinosaurs, and Zatanna comes in to help them out.  It’s a backwards talking-off between Zatanna and the bad guy which leads to some completely ridiculous events.  All in all, it can pretty much be read on its own (even though it’s part of a larger story) so it’s actually just a fun “get it cuz’ I have extra money” kind of book.  Does anybody have extra money?  Then spend it here! 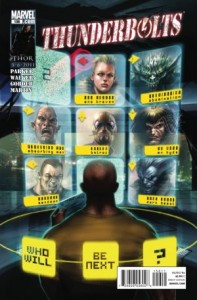 This is a very interesting issue.  On one hand we have the actual Thunderbolts heading to a castle and fighting a bunch of really-nicely drawn creatures (I’m a sucker for zombie nazis with cannons).  On the other hand, we have interviews to attempt to get a new Thunderbolts team together (just in case).  The simplicity of the interview process really works for the comic, and in direct opposition to the crazy blow-em-up fights we’re seeing on the other side.  My only complaint is that the cover is extremely misleading.  I love me some Batroc (don’t you know this by now?), but I can’t remember him actually being in this comic.  And, I don’t think I even saw anyone else on that cover except the actual big reveal.  Not cool. 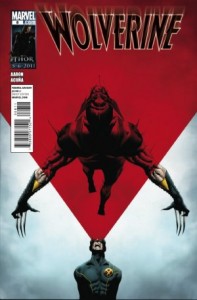 This story has been OK, but there’s a specific section that’s made it all worth it.  The girls have to go into Wolverine’s mind to clear out some of his demons, and in the process it turns into a slightly more raunchy Looney Tunes episode.  And yes, that is a complete positive.  Doors are labeled for parts of his mind, and each girl investigates different parts of his psyche.  It’s a nice piece of comedy that mixes into the overall dark story.  I think we’re finally done with the “Wolverine and his soul end up in hell” story, but we haven’t really cleared all his inner demons, which is actually a good way to transition but be on the same level.  The story is actually very good, and if you have the time, we should have the back issues to catch you up.

Hellblazer #278 Writer: Peter Milligan Artist: Giuseppe Camuncoli: Still rad, still fun, still crazy, after all these years.  Apparently, Hellblazer will be returning to the main DCU; I hope that doesn’t damage this title.

Avengers #12 Writer: Brian Michael Bendis Artist: John Romita Jr.: Also still rad, with a sweet two page spread of a punch.  I really like this story, and I am constantly surprised by its quality.

Green Lantern #65 Writer: Geoff Johns Artist: Doug Mahnke: How many times can I say rad?  More war stuff, and a cool use of the ring spectrum.  Lots of fun.

Tiny Titans #39 Writer/Artist: Art Baltazar & Franco: Why can’t I stop saying rad! Best kids comic in the market, even if it’s a very pink issue.  Always hilarious, and perfect for any kids.

Gotham City Sirens #22 Writer: Peter Calloway Artist: Andres Guinaldo & Batman #709 Writer: David Hine Artist: Guillem March: These are the last two parts of the Azrael story.  The entire time it’s felt like an ending to the Azrael series, and it just wasn’t that good.  A little disappointing to say the least.

Avengers Academy #12 Writer: Christos Gage Artist: Tom Raney: Raney is a respectable fill-in for the usual Mike McKone.  This is still a fun series, but I’m still afraid no one is reading it…

Darkwing Duck #11 Writer: Ian Brill Artist: James Silvani: This comic is still rad as hell.  That is all.

Nick Spencer writes Morning Glories.  And that comic has a lot of talking, but it still works.  This comic has a lot of talking, and it definitely doesn’t work.  I can’t quite explain it, but it uses the interview format to try to establish a character and it just falls completely flat.  Olivetti’s art is strange and always looks kinda unfinished.   That does not help this comic be readable.  It’s a very mediocre comic.  Disappointing.

And that’s it! Congratulations! You made it through another one…