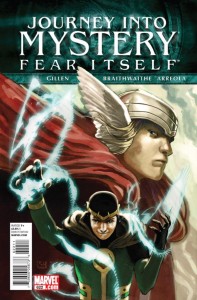 This title takes over the numbering of the old Thor, since series writer Matt Fraction is leaving to helm the new Thor the Mighty (you’d think some sort of media event starring the Asgardian Avenger was coming…). Gillen handled a few Thor stories last year, and did a good job, and here delivers a young-Loki tale that’s layered, lyrical and actually makes you like the complicated little trickster; it’s a sign that, with a crossover mini-series and a movie all throwing a big spotlight on the characters, they’re in multiple good hands right now. I’m crediting the colorist, because with the pages shot directly from Braithwhite’s pencils, he does a standout job. In a week with a decent amount of  cool comics, this is the best. 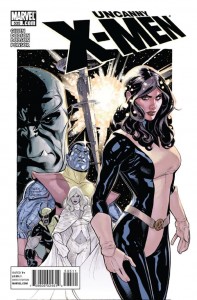 Gillen’s also taken over Marvel’s mutant franchise (also following Fraction, after having collaborated with him on the book for the last few months): here, he’s focusing on Kitty, Peter and the return of the Joss Whedon-created Breakworld. It’s not as startlingly well-written as the Loki tale — the X-Men are such established corporate characters that it’s hard to pull that off any more — but it’s well done, especially with the Dodsons supplying their accessible, pretty art. I’ve been a fan of Gillen’s ever since the wonderful Phonograph, his criminally-undernoticed music-soaked tour de force of a few years ago, and it’s nice to see him hitting the big 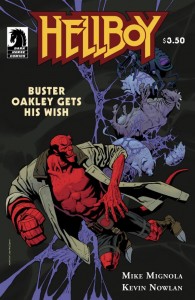 Hellboy investigates cattle mutilations in rural Kansas in the ’80s, and of course complications, both occult and alien, ensue. Nowlan demonstrated a knack for drawing rural folk and farmers on Alan Moore’s Jack B. Quick in ABC’s Tomorrow Stories, and his hayseeds and small-town kids come off as both slightly humorous and slightly menacing: perfect for the story; this is another in a long line of well-done stand-alone comics featuring the Mignolaverse’s franchise character.

“Hot Pursuit” is an alternate-world Barry Allen, a motorcycle-riding adventure who’s on Earth-DC to warn our Barry about a history-altering timestorm that’s on its way, somehow connected to the Speed Force which our Barry controls. Both story and art here are… OK; nothing gets resolved, of course, because this is all a lead-in for DC’s big summer crossover event, Flashpoint, so it’s all hints and portentious warnings and both Barrys acting sort of like buttheads (kind of Barry’s default setting, to be honest), because if they solved their problem successfully, then all those new comics ready to come out over the next few months

The end of the reprint stuff, with another engrossing long editorial in the back, plus a new story by Ba, to give buyers of the original run something new for their trouble. Having already expressed my appreciation for this series here, here and here (among other places); I won’t bore readers with more praise, but will pass along some good news: Casanova III: Avaritia, the first all-new stories under the Icon imprint, should be ready in a few months. 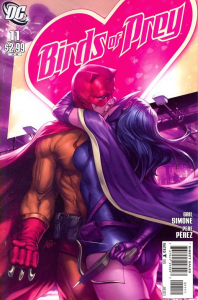 A Huntress/Catman story, just as twisty, expectation-confounding and poignant as you’d expect from Simone; the ending leaves the door just slightly ajar for future installments.

Y’all should have listened to me when issue #1 came out,

since it’s turned into a reasonable hit for Image, one of those jump-up-on-eBay success stories like Morning Glories or Chew. This second issue establishes the apparent groundrules for the series: to quote Casey in the editorial, it’s a book about “a middle-aged superhero with an engine heart on the back nine of his life, with a gaggle of his greatest enemies hunting for him” because, in issue #1, he tried to blow them all up real good and didn’t entirely succeed. That’s actually more conventional a setup than the first issue’s baroque storytelling suggested, and a certain class of reader might be disappointed that there’s considerably less sex, and more tubby redneck sheriff, here than there, but the villains are interesting enough, and this shows some promise as an ongoing serial, so it’s still worth a look. 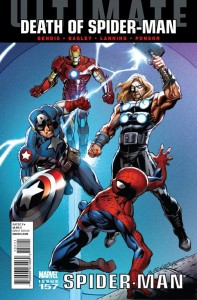 Both of these books are part of the Ultimate Universe “Death of Spider-Man” story; in fact, both lead up to the same last-panel cliffhanger. Bendis and Bagley offer the better ride, since they’re both clearly engaged in the 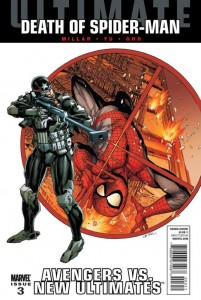 storyline, even after almost a dozen years and (in Bendis’s case) 157 issues with the character; Millar, on the other hand, looks to be phoning it in, barely even trying to spackle over some glaring plot holes involving everyone’s eagerness to think the worst of Nick Fury. I don’t think I’m going to like where this is going (I still like Ultimate Spider-Man, dammit, and would happily read Peter and Co.’s high-school exploits for the next dozen years, too), but maybe it’ll be one of those “kill the costume, not the character” witness-protection deals, and not quite as game-altering as events in these two titles suggest right now. 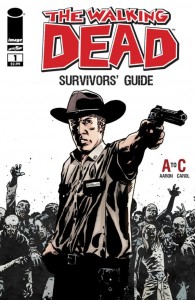 A Who’s Who-type guide to Kirkman’s zombie dystopia; having over 80 issues’ worth of characters to draw on –many of them deceased — means that this first issue only makes it from A to C, but it’s a well-written, detailed guide for fans of the series, whether old-time or just recently pulled in by the TV show; at only $3, it’s a good deal.

With 40 years of experience in comic reading, collecting and reviewing, English Professor Phil Mateer has an encyclopedic mind for comics. Feel free to ask Phil about storylines, characters, artists or for that matter, any comic book trivia. He will post your questions and answers on the AABC blog. His knowledge is unparalleled! He is also our warehouse manager, so if you are looking for that hard to find comic book, ask Phil!
View all posts by Phil →
This entry was posted in New Comics, Reviews and tagged Ba, Bendis, Birds of Prey, Butcher Baker, Casanova, Dodson, Flash, Geoff Johns, Hellboy, Kieron Gillen, Kirkman, Matt Fraction, Moon, Nowlan, Simone, Spider-man, Thor, Walking Dead, X-men. Bookmark the permalink.