The Latest and (Mostly) Greatest #5 by Dan!

Quick and short week, so I’ll try to make this quick and short reviews.  We all know that’s not going to happen, but we’ve all got important things to do, so let’s speed this up! 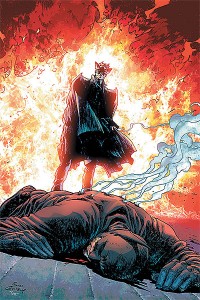 Do you ever get tired of me telling you just how awesome Batman and Robin is?  Well I’m not sure I’ll be able to much longer with the changing creative team, so enjoy it while it lasts!  This issue, things continue building to a head with the Joker and Damian conflict, the Dr. Hurt/ Pyg/ Dick Grayson big battle, and a little suffering for Jim Gordon.  So much has happened in these last two issues, and Frazer Irving has been absolutely spot on.  His bizarre style and coloring really reflect the frantic ideas being displayed in this book.  These last two issues may have been even better than the Quitely drawn issues, and that’s really saying something.  Absolutely fantastic.

Again, do you ever get tired of me telling you to read anything that Eric Powell does?  Well guess what, that’s not going to change any time soon.  This series was kind of previewed in the Buzzard mini-series (also worth reading), and now it’s got a nice 4 issues to tell a story with.  Billy the Kid works with his circus freak “friends” to try to stop Jack the Ripper.  If you’re wondering how fun that sentence is to write, the answer is very.  Kyle Hotz draws very angular characters and relies on their facial expressions to really advance whatever Powell’s script calls for.  There’s also a special “Goon on vacation” backup that is four pages of just enough stupidity to amuse me.  Read it, Enjoy. 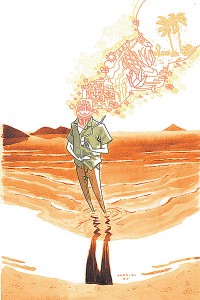 So this mini-series comes to an end (dear God, ten months already?!) and I still don’t know how to feel about it.  Extremely pretentious at it’s highest, but a gripping narrative with a gut punch ending whenever it wanted to be.  It’s weird to see a couple 30-somethings reflect on life and how it ends when they probably aren’t anywhere near it themselves.  I kinda worry about Ba and Moon’s obsession with death through this series, but it’s just been so damn interesting I can’t complain.  Great stuff, and as always their art styles are both spectacular.  Just the right amount of cartoony to engage me, but their own little styles (more wavy as opposed to perfectly straight lines, always long thin legs, that kind of stuff) make it compelling to look at.  They’ll be back soon, I know it.

Finally, this series cracks my top 5!  It’s really that good folks, and I can’t say enough about that.  This issue, the Warriors 3 pick up Thor to go hang out in Britain where they run into and fight (of course) Captain Britain.  It’s really awesome, I can barely even explain it.  Langridge uses the same wit he has shown in Muppet Show, and embraces throw away lines that had me laughing.  Samnee keeps his art as simple and beautiful as humanly possible.  I always want new characters in every issue just to see how Samnee draws them.  Looks like Namor is next, and I say hell yes! 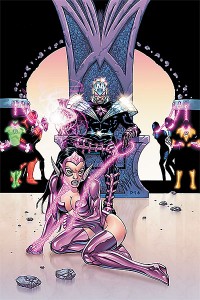 So the thing I absolutely love about Green Lantern is how Johns foreshadows everything.  There are throw away lines in previous stories that will link up in some way, the whole mythos keeps getting fleshed out, and more and more things just keep happening.  Johns is liked by the masses because he can tell a story, but it can purposefully lead to other places in the future.  This stuff is great.  With Mahnke drawing it, this is easily a must buy as well.  This team puts out fabulous material week after week and I can’t get enough of it.  There are plenty of trades available if you want to catch up on it quick, and seriously?  do it.

Irredeemable #17 Writer: Mark Waid Artist: Peter Krause: An interesting anti-hero story, but how long can it last?  Worth picking up the trades because it’s just so different

Invincible Iron Man #30 Writer: Matt Fraction Artist: Salvador Larroca: Still pretty good, but I was spoiled with how awesome it used to be so I expect more.  Always worth mentioning.

Doc Savage #6 Writers: Ivan Brandon and Brian Azzarello Artist: Nic Klein: Worth noting because Azz is not attached.  Other than that, still not really my style.

Ultimate Avenges 3 #2 Writer: Mark Millar Artist: Steve Dillon: Millar sure can write a 2 issue exposition in a 6 issue mini huh?  Mostly worth it for Dillon art, so very very pretty.

Batman Odyssey #3 (of 13) Writer/Artist: Neal Adams: Best ish so far.  Almost a really well-written one, then the entire ending had me actually go “What?” out loud.  So close…

Daken: Dark Wolverine #1 Writers: Dan Way & Marjorie Liu Artist: Giuseppe Camuncoli: Good for people that care about Daken.  So, for me?  Not so much.

Weird War Tales #1 Writer/Artist: Various: If you love Darwyn Cooke that much, he has like 6 pages here.  Otherwise very generic war comic with a fair amount of mediocrity.

Remember how awesome Spidey was during the gauntlet.  Well suck out at all that momentum and try to explain a several year old concept while talking about lost relationships and why mind-wiping is bad or weird.  That’s what this latest Spidey arc has been about and it’s been terrible.  It was so bad that I forgot two Amazing issues came out this week, and only grabbed the terrible one.  Not Rivera’s fault, his stuff is pretty.  I blame all this on Joey Q.

An apparent sequel to the Torch and Invaders series previously from Marvel/Dynamite, and it’s not any better than it has been.  Very mediocre stuff about mediocre characters doing mediocre things.  And as always, it’s tied into Alex Ross.  Let’s be clear here, I still think Alex Ross as a “plotter” is a complete crock, and I actually think it’s makes the books even worse.  Waste of time.

Bendis has just lost me on this one.  I don’t realy care about the Dr. Strange mystic stuff, so this is just not the book for me anymore.  It’s really too bad that I still have all the original series of New Avengers, cause now I just don’t care about this team anymore.  Again, not the artist’s fault, Immonen draws the hell out of it, but he doesn’t have much to work with that I care about at all.

So that’s it!  A fun short week, and you’ll see more from me later!

One Response to The Latest and (Mostly) Greatest #5 by Dan!