The Latest and (Mostly) Greatest #19

Oh man, I’m getting way more efficient with this whole thing; look at how early these are done!

You ever get tired of  me worshiping this title?  Well get over it.  I’m not a huge fan of Paquette, the artist for the first three issues, but I love me some Chris Burnham.  Take Frank Quitely. Mix him with Geof Darrow, and you get yourself some Burnham.  It’s so freakin’ pretty to look at.  Because we’re only four issues into Morrison’s “grand plan”, it’s impossible to understand what everything means.  He’s planting seeds for himself, and for other writers, and it’s just becoming more and more complex.  Batwoman shows up, which is nice, cause we’re still waiting for the ongoing, but this is still an absolutely fantastic comic book that always leaves me wanting more.

Oh I am such a sucker for Batroc!  Especially when it’s well written Batroc.  It’s against my better judgement to even recognize one-shots, but this is one that’s actually worth it.  You don’t need any prior knowledge of the characters to just sit back and enjoy Captain America fighting a jumping guy in Paris.  This is one of the most interesting one-shots to have come out on the market in the last several years.  Arlem’s art isn’t the absolute best, but it doesn’t take anything away from the overall.  The story itself feels backwards, being told by the bad guy, but I really really enjoyed it.  Never mess with a Leaper, that’s what I’ve learned from this issue. 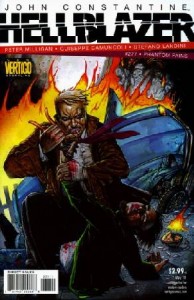 So remember how I freaked out about how great this was a couple months ago?  Well it kinda let up, but here we are back on track.  Milligan writes the kinda gritty ridiculous, over-the-top Vertigo stuff that we need to have if that section of the market is going to survive.  Aside from a kinda ridiculous sex scene, this is a “let’s get Constantine his thumb back” type of story (which is a classic type of story, I know).  Car crashes, violence, demons, and all the set-up hints for future issues that makes this so interesting.  Pick it up, cuz’ it’s actually surprisingly good stuff. 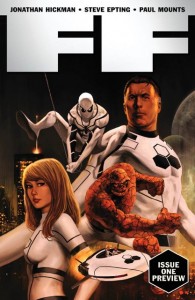 There was a ton of hullabaloo (yeah that’s a real word) about this issue hitting the stands.  I scoffed initially about Spidey joining the Fantastic Four, but it kinda works here.  This is a very heavy set-up issue, with all the pieces being put into place for what is the status quo.  It’s very clearly a Hickman book, in that it has weird text/graphic design pages at the end attempting to explain everything what’s going on.  There’s a ton of pieces linking up to his stories from the past, so it’s becoming kinda complex.  If you’re looking to get involved in a Fantastic Four story, this is the place to go, and it’s still available and immensely popular.  If everybody loves it, can you possibly be wrong in picking it up? 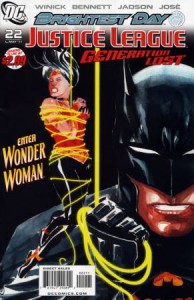 We’re flying towards a conclusion of this series, and I think I’m going to enjoy it.  I still won’t fully commit myself to this story, but I’ve put it up here and told you to read it so many times, how can I keep denying it?  The whole Wonder Woman section of the story is very strange, and I wonder if the WW ongoing is going to connect with this story in any way.  Superman’s walk hasn’t connected to any stories, but Wonder Woman’s alternate reality isn’t really so alternate?  I’m a little confused.  But this story is great.  It’s really been a very interesting story that hasn’t gone any way that I’ve expected.  If you read it and like, we do still have back issues… (shameless plug)

Captain America #615.1 Writer: Ed Brubaker Artist: Mitch Breitweiser: Worth it if you already read Cap, cause it’s more of the same.  Worth it also as a standalone story.  Fun stuff.

Uncanny X-men #534 Writer: Matt Fraction Artist: Greg Land: Still don’t like the photoshopped art, but the story is interesting enough to keep me around.

Justice League of America #55 Writer: James Robinson Artist: Brett Booth: More Doomsday set-up.  I’m intrigued, but I’m not sure I care that much.

New Mutants #23 Writer: Mike Carey Artist: Steve Kurth: Tension builds in this alternate reality, and something is still off.  I really like this, and it’s a lot of fun.

This is just so very “Meh.”  When you have a “superstar” like Finch on the book, you want it to either be the greatest thing ever, or Ultimates 3 (burn).  Two issues in and this is somewhere between.  It’s just nothing special, which is disappointing for a multitude of reasons.

The Namor series itself isn’t especially good.  When one of your issues has 3 different pencillers, and none of them have participated in the first two parts of the story, you’re in trouble.  This issue is an artistic mess, and it’s really really rough to look at.

This Spawn story is still terrible.  That is all.

And that’s it! See you folks later this weekend!