Another day, another review of pure 60’s insanity.  Let’s do this! 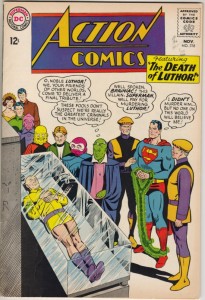 So apparently there’s a planet named Lexor that absolutely worships Lex Luthor… news to me!  Luthor attempts to return to it by sleeping on a cot in a spaceship (you heard me), and it totally works.  He, obviously, has the entire planet turned against Supey and that makes things extremely difficult when Superman comes to the planet to get him back.  Superman punches Lex in the face so hard he dies, again not kidding, so he’s put on trial for the murder of Lex.  No one believes  him, and then it’s to be continued.  Damn you DC comics!  There’s also a Supergirl story in here about her heading to college, where she meets a monkey.  I don’t even know what to say about that.  More info can be found HERE

Superman, when he’s not just walking in his own title, can be found in Action Comics, Superman/Batman, DC Universe Legends, and more.  There’s also plenty of back issues and trades; just ask one of us! 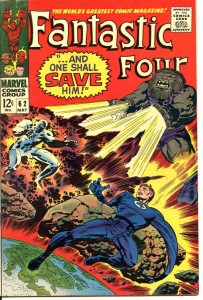 Man, Blastaar is such a ridiculous character!  Reed Richards is trapped in the Negative Zone, hurtling toward his death (which I’m sure is going to happen…) until the Inhumans come around to help them out.  There’s plenty of big ol’ Kirby page spreads that show just what kind of art genius he was for his time, and plenty of fight scenes to actually keep me interested.  The Inhumans send in Triton to the Negative Zone because it’s “like an endless ocean” so he can survive.  But in the process of saving Reed, they release Blastaar from some cocoon he trapped himself in.  Blastaar and Reed make it back out of the Negative Zone, but while the FF is celebrating, Blastaar joins up with The Sandman because… well… why not?  More info can be found HERE.

The FF has been around for over 50 years with many different incarnations of what they are.  Lately, Johnny Storm is dead, but there’s the title FF to keep the legacy going.  They don’t call themselves the Fantastic Four anymore, the FF stands for Future Foundation. 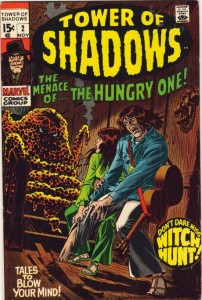 With a claim on the cover like “Tales to Blow Your Mind,” that’s some high expectations! Then the first page uses the word “phantasmagorically” and I’m sold!  This is a pretty traditional anthology of stories about witches and horror and other things, narrated by a Creepy dude with a corncob pipe names the Digger.  It’s got plenty of heavy hitters working on it from Roy Thomas and Don Heck, to John Buscema and Neal Adams.  It’s a strange little book that kinda represents the fact that every artist would try anything once back in the day.  It also has a Stan Lee written horror story, but we should probably try to ignore that.  Overall it’s a strange book in a strange time, but it works really well.  More info can be found HERE.

There aren’t many genuine horror comics out there anymore.  There are a couple good EC collections, and some Showcase and Essential comics from both Marvel and DC.  Dark Horse also releases the Creepy anthology every once in a while, and that’s the best you can get!

And that’s it!  I’ve got other important things to do so I’ll wrap this up.  Later!

This entry was posted in Reviews and tagged Fantastic Four, Lex Luthor, Superman, Tower of Shadows. Bookmark the permalink.