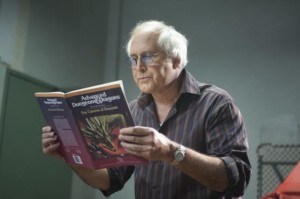 I have nothing new to say about this comic, except that I still like it — but if you didn’t see Community this week, go to your cable box and its “On Demand” channel, and see it right now: the gang play Advanced D&D, with Abed as DM and Pierce as scorned, gleeful personification of evil (Chevy Chase does his best work of the series), and it’s… just perfect; you can tell the creators spent a lot of their high school time with twenty-sided dice and character sheets. I was painfully slow to warm up to this show, but got the first-season 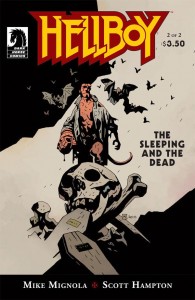 DVD for Christmas, and now I’m a fan, and this one was right up there with the animated one and the paintball one. Seriously: go see it right now; you can write in and thank me afterward.

Hellboy: The Sleeping and the Dead #2 (of 2) — Writer: Mike Mignola;  Art: Scott Hampton

Two Mignolaverse books this week: the first offers very good art from Hampton, with a spooky old house, a female demon and a vampire (and, since it’s a Hellboy book, lots 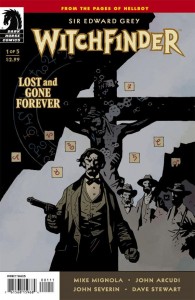 of punching), all offered in a shadowy, realistic style that’s an effective match for Mignola’s no-wasted-words script (his use of nursery rhymes here is both chillingly appropriate and appropriately chilling). The attraction for Witchfinder is the John Severin art — and, yes, the story is set in the American West, in 1880, so he gets to draw his gorgeously scruffy interpretations of outlaws, town dwellers and saloon frequenters. Lots more words in this one, but the plot, both twisty and grim, justifies them, and the contrast between the British hero and the frontier locals is played for just the right amount of comic relief. But that art: every line exactly where it needs to be, no more and no less, and worth the price of the book by itself. 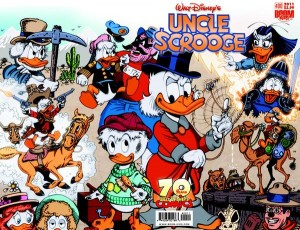 For this title’s 400th-issue anniversary, the lead attraction is “The Man Who Drew Ducks,” an affectionate tribute that posits Uncle Carl as a character in the Disney Universe (a portrait artist, of course), and is appropriately fact-filled, charming and grateful. Add the Jippes back-up, a few Barks one-pagers, and the two covers (I got the Don Rosa wraparound, but the lushly-colored painted recreation of Barks’s cover to the first Uncle Scrooge comic, Four-Color #386, was hard to pass up), and this is the best issue of the book since the Boom! Studios relaunch. 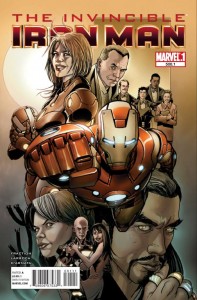 The first of Marvel’s “.1” issues, and, as you might expect, it’s a summary of the title character’s life and adventures, meant as both a review for old readers and a jumping-on point for new ones. Fraction frames it as a speech Tony’s giving at an AA meeting, which lets us see his character motivation along with the major life event summaries: it’s a clever and effective conceit, and Larocca’s art gives it the humanity and skill with facial expressions that it needs to hold the readers’ interest, even without any big fights or heavy action. Let’s hope the other .1 books can be as entertaining, and treat their heroes with as much insight.

Still wonderful to look at, and painful to read. I stand by my advice last time: get a big bottle of Wite-Out, pour it over all the word balloons, and add your own dialogue: all the awkward sentence constructions and ellipses (Adams uses ellipses in his scripts the way Kirby used boldface type, and to the same weird, offputting effect) won’t give you a headache, and your explanation of the plot can’t be any more confusing than Adams’s. 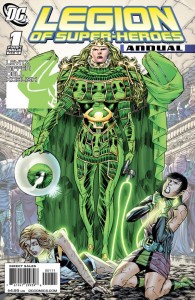 Mostly about Lightning Lass and Shrinking Violet on Orlando, battling the Emerald Eye and its new mistress (yes, I know that none of that made any sense to you if you aren’t a Legion fan, but bear with me…), and the Levitz/Giffen team makes it sing, both in the words and the pictures, like the old pros and collaborators that they are. Add a Legion History board game (the entry for the time between the last ’80s Levitz script, the “Magic Wars” one, and the current Earth-Man continuity says “The Mystery Years! Lose a turn trying to figure out what happened.” Heh.), and an illustrated Interlac alphabet, and this is that rare item: an Annual special enough to be worth its extra pages and price.

Stuff I bought but don’t have much to say about, so check reviews of previous issues in the archives if you’re interested:

With 40 years of experience in comic reading, collecting and reviewing, English Professor Phil Mateer has an encyclopedic mind for comics. Feel free to ask Phil about storylines, characters, artists or for that matter, any comic book trivia. He will post your questions and answers on the AABC blog. His knowledge is unparalleled! He is also our warehouse manager, so if you are looking for that hard to find comic book, ask Phil!
View all posts by Phil →
This entry was posted in New Comics, Reviews and tagged Batman, Carl Barks, Chevy Chase, Community, D&D, Hellboy, Interlac, Iron Man, John Severin, keith Giffen, Larocca, Legion of Super-Heroes, Matt Fraction, Mignola, Neal Adams, Paul Levitz, Uncle Scrooge, Witchfinder. Bookmark the permalink.