The Latest and (Mostly) Greatest #18 by Dan!

It was an interesting light(er) week, so I’ll probably frustrate some people with my picks.  But that just means you’re reading, and we know I only do this for a reaction… Let’s do this! 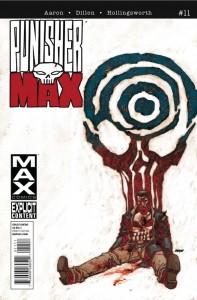 The more I read this, the more angry I am at Ultimate Avengers for delaying this story art.  Steve Dillon is a comic genius, and is one of (if not THE) best artists Marvel of DC has to offer.  Add to that that Jason Aaron is transferring his grim n’ gritty attitude from Scalped seamlessly to this story, and that puts together one of the strongest creative teams you can possibly find.  I won’t lie, I went back through these just to see if Castle was really missing a finger from one moment on, and hell yes he was!  It’s the kinda comic that is ridiculous, over-the-top, violent, but also has such an attention to detail that you can’t help yourself.  Friggin’ fantastic stuff. 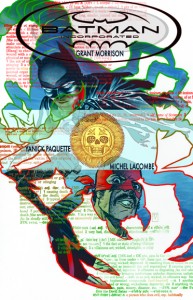 Speaking of ridiculous, here comes an insane Batman comic from G-mo.  G-mo writes Gaucho, the Batman of Argentina, who I believe was in that JH Williams club of Batmen storyline, but that doesn’t really matter here.  What we do get is some good ol’ fashioned insanity.  Bruce Wayne dances the Tango of Death with a lady who wants to poison el Gaucho, more plots are built up and it leads to the big surprise villain/luchador in a wheelchair guy who I don’t know anything about.  I hope the scheduling gets back on track for this series, because it is easily and by far the best bat-book out on the stands.

This story is interesting.  It’s a light enough week that it makes the top picks, based almost purely on art.  Chaykin does a series of flashbacks where Nick Fury organizes the first team of Avengers, and Deodato provides the art on the present story where Mockingbird might die.  The story is pretty to look at on every single page, but it’s two completely separate stories.  There is no connection between the two tales that are told here.  I’m worried that it’s too broad and will drive people away, but holy crap, it’s so pretty to look at.  Never thought a Chaykin/ Deodato book would actually happen, but here it is.  At least go take a look… 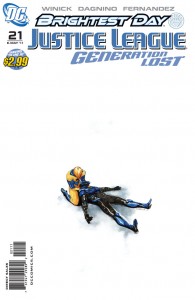 This goes in the “I told you so” category about the death of Blue Beetle because, well, I told you so.  It feels like a cop-out or a Deus Ex Machina, but I don’t really mind it at all.  This story keeps chugging right along, and I’m genuinely excited to see where this story might be going.  I never thought I would find a way to enjoy a Winick comic this much, but it is definitely working for me.  It’s an ok looking book with a really fantastic and interesting plot that will keep a reader coming back for more.  I wonder how well this would work being read as a trade, but it may still be worth it. 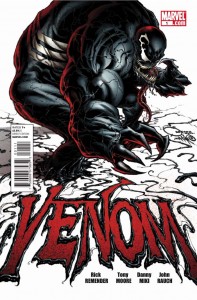 So… I’m not proud of this.  This is clearly a guilty pleasure kind of comic.  It’s the Fear Agent team together again, so it’s going to be completely over the top and crazy, which is just the proper way to do a Venom story.  Moore’s pencils look WAY different with Danny Miki on inks. Miki turns them into a style that seems more like David Finch, but I mean that as a compliment.  It’s violent, it has jack-o-lantern, and it has the crazy faces drawn by Moore that we’ve come to expect.  However, based on his track record, look forward to 5 issues with this team, and then a series of fill-in artists for the rest of Remender’s run (was that sassy enough?  I LOVE Tony Moore, but that bail out routine of his really bugs me…)

Ultimate Spider-Man #155 Writer: Brian Michael Bendis Artist: Chris Samnee: No seriously, Chris Samnee really drew this, and it was freakin’ beautiful.  But “meh” on the plot ruins this.

Captain Swing #3 (of 4) Writer: Warren Ellis Artist: Raulo Caceres: Hey remember this title?  It’s been like 8 or 9 months since the last issue.  Still good, but frustrating because of that schedule.

Incredible Hulks #624 Writer: Greg Pak Artist: Dale Eaglesham: This comic is pretty rad, and Eaglesham is a big part of that.  Pak is a capable writer, and if you’re looking for a good Hulk story, this is it.

Wonder Woman #608 Writer: Phil Hester Artist: Geraldo Borges: I’m still enjoying this, and I can’t explain why.  It’s a fun tale that isn’t explaining itself quite yet, and it needs to soon before it gets tiresome.

X-Men Legacy #246 Writer: Clay Mann Artist: Clay Mann: This story is weird, and I’m not sure if I like it.  Check back in a few weeks for my official opinion.

Superboy #5 Writer: Jeff Lemire Artist: Pier Gallo: A Superboy/Kid Flash race that’s more about the two of them talking instead of racing.  It’s still good and Lemire is a capable writer.

Joe the Barbarian #8 Writer: Grant Morrison Artist: Sean Murphy: This took so long that it was completely unintelligible at this issue.  The oversized $3.99 price tag takes away from everything.  This turned out to be a huge disappointment.

Outsiders #37 Writer: Dan Didio Artist: Philip Tan: So… backgrounds don’t exist?  This comic looks terrible with Tan doing a hack job on the whole thing.  Didio also gives a pretty crappy story that doesn’t work in any way.  I do enjoy the idea that Doomsday is collecting all the Super-replacements from the first time he was around, but that’s just one idea in a terrible, terrible story.

Titans #33 Writer: Eric Wallace Artists: Fabrizio Fiorentino and Philip Tan: Hey! More Tan, and still terrible.  This story’s worse than Outsiders and relies on way too many “shocking” moments.  It’s just a giant ball of not good in any way, and I can’t believe it’s still being published.

And that’s it!  I’ll be back later in the week as always.

One Response to The Latest and (Mostly) Greatest #18 by Dan!