It Came From the Back Room #20 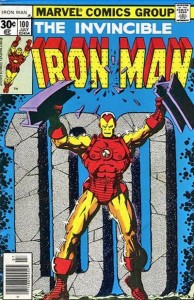 Standard recap: I’m slowly going through AABC’s one-million-plus back-issue room, restocking the boxes on the sales floor and pulling stuff to sell as discount/overstock/special items. I’m going through the alphabet backwards (don’t ask), and at my speed, this amounts to a two-year project. This week, we’ve finally hit the letter “I,” and the first up is one of Marvel’s longest-running titles, and most popular movie stars: the Invincible Iron Man!

We can skip over much of Iron Man’s earlier years, since it’s not like there’s much in the way of discount issues available (although we’re now well stocked from the late ’60s up in the regular back-issue boxes): the Stan Lee/Gene Colan era in Tales of Suspense, followed by George

Tuska as the go-to-artist in Shellhead’s own book, partnered with Archie Goodwin in the early issues, then Gerry Conway, then Mike Friedrich for quite a while, and finally Bill Mantlo up through the comic’s century mark and into the early 100’s.

The big change — and the most significant one for Iron Man’s “modern” era — happens with issue #116, when the trio of David Michelenie, Bob Layton and John Romita Jr. take over duties on the book — Michelenie scripting and co-plotting with Layton, who supplies inks over Romita Jr.’s pencils. This team starts with a bang: their first year on the tile involves a subplot of Tony Stark drinking more and more, and culminates in issue #128, the first time that he admits his alcoholism, and battles it. It’s  simplistic — 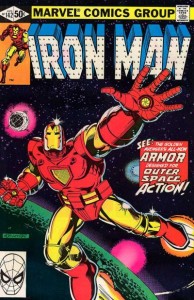 after a year’s buildup, he “solves” his problem in one issue — but it was a cutting-edge storyline for the late ’70s, and added a facet to Stark’s character that other authors have mined ever since.

Just after that issue, around #130, is where AABC starts to have significant Iron Man books on the cover-price racks, too, and they’re worth checking out: Romita Jr. leaves (although he comes back to do breakdowns over Layton’s inks again a few issues later), and Michelenie and Layton establish themselves as the prime Iron Man creators of the early ’80s. They’re good at mixing the drama and humor, while keeping subplots boiling and making the reader care about Tony’s large cast of characters — buddy Rhodey, expert (and formidable) executive assistant Mrs. Arbogast, love interest Bethany Cabe, villains Madame Masque and Justin Hammer — while mixing in lots of 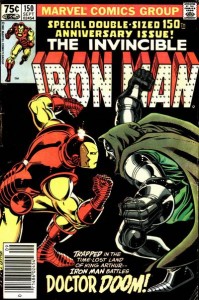 cool high-tech armor stuff too. Issues #149-150 are a high point, featuring Iron Man and Doctor Doom stranded in King Arthur’s Camelot era and forced to forge an uneasy alliance to get back to their own time period, a story memorable enough to have spawned at least two sequels.

That high point is also an ending of sorts: by issue #158, Layton, Romita Jr. and Michelenie have all moved on, and a new era is started with scripter Denny O’Neil, recently arrived from a long stint at DC. Ironically, his first art partner, in #158, is fellow-DC-traveler Carmine Infantino, with Paul Smith art in #159 and, startlingly, a Steve Ditko story in #160. Penciller Luke McDonnel arrives with #161, though, and he and O’Neil embark on 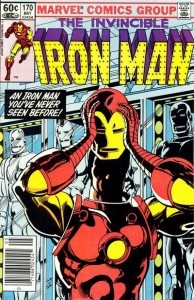 a long run that offers more changes than the book has ever seen, as Stark’s rival Obediah Stane manipulates him both financially and psychologically, and his alcoholism returns with a vengeance, incapacitating him to the point where, in issue #170, Jim Rhodes dons the armor and becomes the new Iron Man.

Readers expecting this to be a one-issue stunt, or to see Tony kick his habit and return quickly, are wrong: instead, the book spends the next few years chronicling both Stark’s slide into addiction (as, Stark Industries now Stane Industries, he becomes a homeless vagrant wandering the streets of New York City), and Rhodey’s struggle to figure out the armor, find new technical partners, and fight the bad guys. It’s a refreshing time period, since everything’s so 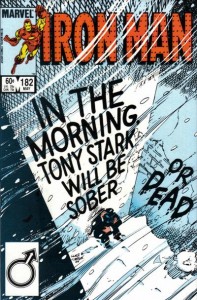 different: instead of Tony’s high-tech solutions, Rhodey favors a more brute-force, punch-’em-inna-face style that often startles his opponents and proves surprisingly effective. Tony’s story hits its climax in issue #182, as, at the same time that Rhodey is returning from the first Secret Wars crossover, he hits bottom during a blizzard, and has to choose between dying and saving a newborn baby’s life. Of course, we all know the outcome, but it’s one of the most affecting stories of O’Neil’s run, a quiet little tale that’s one of the better stand-alone Marvel books of the ’80s.

O’Neil and McDonnel aren’t done, either: Tony takes a long time to recuperate, and he and Rhodey move to California and start a new tech company, while Rhodey keeps wearing the armor.

Complications ensue, though: the cybernetic links in the helmet, meant for Stark’s brain, start to drive Rhodes insane, and by issue #191 Stark, reluctantly, must put on his “old,” grey original armor, and battle a crazed Rhodey/Iron Man in a double-sized issue #192. Rhodey eventually gets cured, while McDonnel leaves with issue #195, and everything culminates in the obligatory double-sized 200th issue, wherein Stark, armored again, fights and defeats Obediah Stane, in a scene reasonably familiar to viewers of the first Iron Man movie.

O’Neil stays through issue #208 (with pencils from #200 on by Mark Bright), and then it’s musical creators through issue #215, featuring a homecoming: the return of the Michelenie/Layton team. They pick up pretty much exactly where they left off 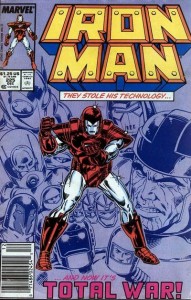 (with Bright providing the pencils for Layton to ink); an early high point of this run is the “Armor Wars” serial from issues #225-231, where Stark finds that his stolen Iron Man tech has been providing the power for a lot of other characters’ costumes, and sets out to get it back, despite the objections of the US government and the Avengers. There’s a cool epilogue to the story in #232, with art by Barry Windsor-Smith, and then it’s Michelenie, Layton and new penciller Jackson Guice through issue #240, with Layton mostly inking his own pencils after that, including the first sequel to the Iron Man/Dr. Doom team-up that appears in issues #249 and 250, exactly 100 issues after the original story. Michelenie leaves at that point (Dwayne McDuffie scripts #251 and 252, with Herb Trimpe pencils), and the next period of note begins with #258, 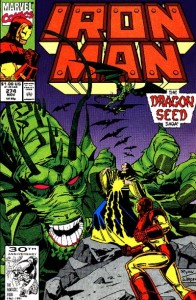 and the arrival of John Byrne as… writer?

Yes, indeed: Byrne, by 1990, had been penciling Marvel’s top books for well over a decade, and was expanding into the writing field. His artist was familiar to Iron fans: John Romita, Jr., and they began with “Armor Wars II,” a sprawling story that involved the Living Laser, the Mandarin, Fin Fang Foom, Tony Stark’s nervous system being controlled by bad guys, and a bunch of other delights. Romita Jr. leaves with issue #266, as Paul Ryan takes over (a downgrade, although fortunately not a huge one), and the whole thing wraps up with issue #275.

Byrne stays on for two more issues, and then leaves to be replaced by Len Kaminski, who guides Tony and company through the next few years: 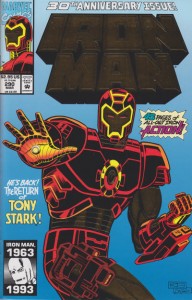 Galactic Storm, Rhodey becoming War Machine (and getting his own book), and a number of, frankly, mediocre ’90s artists and storylines (featuring the very-’90s concept of enhanced foil covers in issues #288, 290 and 300). Kaminski leaves with issue #318, replaced by scripter Terry Kavanagh, who’s the point man for the most bizarre (which is to say, stupid) stage of Iron Man’s existence: Teen Iron Man.

This starts in issue #323, and connects with the Avengers one-shot “Timeslide,” the kind of high-concept hocum that could only have happened in the mid-’90s: see, Tony Stark is actually evil, and a mastermind who’s been manipulating everyone (well, he’s being mind-controlled by, I think, Kang, but there’s no way I’m rereading these books…) — but, fortunately, an alternate-universe version of him who’s a teenager shows up, and… well, as I said: stupid (you can just hear the marketers: teens will identify with him! Forget 30 years of

Also brief — issue #332 connects to the X-Men Onslaught crossover, which signals the end of both Teen Tony and Iron Man’s own book, as the cancellation makes way for a new concept: Heroes Reborn.

… and that’s as good a stopping point as any: tune in in two weeks, and we’ll see what happened next (hint: Jim Lee!).

With 40 years of experience in comic reading, collecting and reviewing, English Professor Phil Mateer has an encyclopedic mind for comics. Feel free to ask Phil about storylines, characters, artists or for that matter, any comic book trivia. He will post your questions and answers on the AABC blog. His knowledge is unparalleled! He is also our warehouse manager, so if you are looking for that hard to find comic book, ask Phil!
View all posts by Phil →
This entry was posted in Comics History, Marvel, News & Promos and tagged Bob Layton, David Michelenie, Denny O'Neil, Iron Man, John Byrne, John Romita Jr, Tony Stark. Bookmark the permalink.