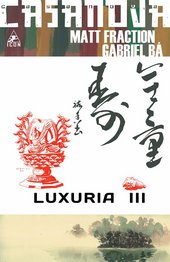 Even though this is still reprinting previous issues, very few of you saw the originals, so it’s worth getting into now (especially with new stories promised after the repeats finish). Fraction’s in Michael Moorcock/Jerry Cornelius mode here, with time travel, flashy narrative techniques, suave spy stuff and hallucinogenic head games, and Ba’s one of the few artists able to keep up with him and make it all sing. Great stuff, and made even better by Fraction’s essays in each issue — this one, especially, where he gets very personal, practically pays for the book by itself. 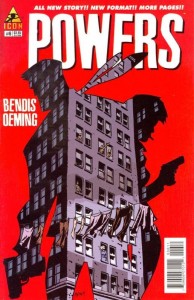 Another book with great editorial material — Bendis’s snarky letters columns (five pages of small type here!) show why comics should have them, and provide a lot of fun, for both newcomers and old hands. Oh, you wanted to know about the story? Good as always, as Detectives Walker and Enki investigate a murdered “god,” in between extracurricular activities that each, in their own way, threaten their partnership — and then Deena, the old partner, shows up with a new badge….

The end of the current Zemo storyline, competent and unflashy as always (Brubaker’s not one to set up blow-your-head-off, jaw-dropping pyrotechnics; his storylines are just so well-constructed, so reasonable and true to their chaacters, that you can’t help but be carried along by them. Guice, although he’s an old pro, seems to be growing as an artist — the title splash here is Sterankoesque, and all of his action and figure work flows just as smoothly as Brubaker’s words do; they’re a very compatible team.

Stuff I bought, but don’t have anything to talk about, so read previous reviews in the archives if you want to know why I buy it:

Stuff I didn’t buy, what want to talk about: 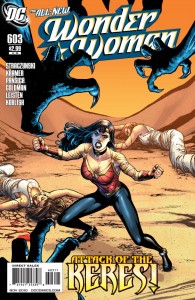 For a story involving harpies, hell and considerable fighting, this is just… well, boring. Part of it is the tag-team art (five different pencillers and inkers, DC? Really?), which reduces the visuals to generic, middle-of-the-road blah; part of the blame is that it’s hard to care about yet another revamp of the character (and Straczynski’s ploy of stripping her of everything that makes her identifiable and cool, and slowly adding it back over a year’s worth of issues, doesn’t add to the excitement). News broke this week that mega-TV producer David Kelly is working on a Wonder Woman TV pilot; if that happens, you just know that all of this reboot is going to go away anyway; can’t we just get well-told, one-issue stories that emphasize the good stuff about Diana, and stop with the complicated, too-clever-by-half crap? 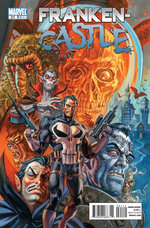 Worth noting because (a) it’s monster art by Brereton — including Frank on Monster Island — and (b) it concludes the whole Franken-Castle arc (so, presumably, the title will revert back to normal next issue, too). It seems like a too-hasty end to the whole thing (like they got told to wrap it up now), but hey: Brereton art, and Remender makes sure he has plenty of cool stuff to draw, so it’s worth a look. 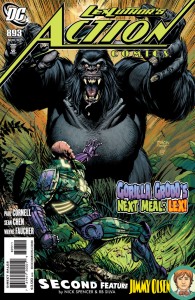 Same take on this as before: I like Cornell as a writer, and respect his talents, but reading about Lex Luthor spending a year chasing down some high-tech/mystical/cosmic whatchamacallit thingy and, this issue, fighting Gorilla Grodd over it (with fill-in art, yet), just doesn’t seem worth $4. The Jimmy Olson backup would only add to the value if he were turned into a giant turtle or something, and he isn’t, so no.

Four new short stories featuring Husk, Dazzler, Rogue and Magneto, respectively, fighting vampires, plus the first 11 pages of the Claremont/Sienkiewicz Dracula story from Uncanny #159. The title of the first tale — “From Husk Til Dawn” — made me smile, and $4 isn’t a bad deal, but I’m not particularly into even the main X-Men book dealing with this “event,” so my enthusiasm for tie-ins isn’t high. For the record, Peter David supplies the best writing, and Tom Raney and Doug Braithwaite the best art.

With 40 years of experience in comic reading, collecting and reviewing, English Professor Phil Mateer has an encyclopedic mind for comics. Feel free to ask Phil about storylines, characters, artists or for that matter, any comic book trivia. He will post your questions and answers on the AABC blog. His knowledge is unparalleled! He is also our warehouse manager, so if you are looking for that hard to find comic book, ask Phil!
View all posts by Phil →
This entry was posted in New Comics, Reviews and tagged Action Comics, Bendis, Brereton, Brubaker, Captain America, Casanova, Cornell, Franken-Castle, Gabriel Ba, Guice, Matt Fraction, Oeming, Powers, Remender, Straczynski, vampires, Wonder Woman, X-men. Bookmark the permalink.