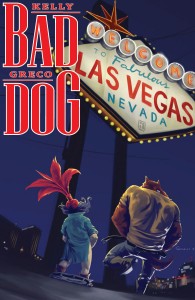 This hasn’t been out for awhile, but Kelly’s tale of a werewolf bounty hunter cursed by past sins and existential angst (but, in the best hard-boiled detective tradition, still determined to do the right thing) is worth waiting for. This issue, Lou and his partner, the cheerfully scatological, sexually deviant but religiously fanatic midget Wendell, get their Hunter S. Thompson on and travel to Las Vegas for fun and debauchery, although of course complications ensue. Diego’s art is always fun to look at, especially on the two leads (Lou’s massive canine face, whether sad, angry or blissfully drugged out, always looks just right), and Kelly’s combination of adventure and humor (Lou to two goons, after demonstrating that their silver werewolf bane doesn’t work on him: “Now please get as far away from me as possible before I shove my partner up your ass.” Wendell, arms crossed, matter-of-fact: “I can be extremely irritating to colon tissue.”) makes me happy; you can tell this book is a labor of love, and it’s the best of the week. 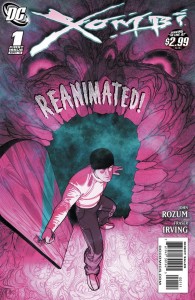 Xombi was a Milestone series back in 1994-96, a supernatural/science horror-comic combo involving David Kim, whose body is infested with nanomachines that keep him young and repair any damage — useful, considering the various weird entities and malevolent beasties that he encounters. The best part of it was always Rozum’s ability to generate dozens of offbeat ideas and spray them everywhere; this issue continues that tradition,  offering, among other things, miniature prisons, eerie snow angels, and a team of Catholic heroes including Catholic Girl, Nun of the Above, and Nun The Less (who has Atom-like shrinking powers, naturally; Kim says to another sister “Which nun are you?” and she replies, tartly, “None of your business”). Irving, who wasn’t involved in the original book, proves to be a wise artistic choice: he’s able to sell all the weirdness, and has an effective combination of dark humor (the mummified face of a dead priest is horrifying, but the expression his face is somehow startlingly funny) and chilling horror (see the final splash-page 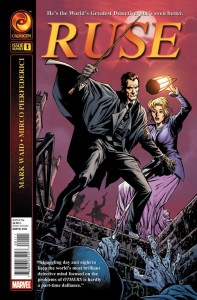 cliffhanger). I have no idea about DC’s reasoning in resurrecting this book (and as an ongoing series, too), or why they thought it would sell, but I’m glad it’s back.

This is another revival, of the Crossgen title from ten years ago: it’s a Sherlock Holmes pastiche, set in the late 1800s, with an arrogant detective and a plucky female Watson who’s more than his match. I never cared for much of Crossgen’s shared-universe fantasy output, but this, off in its own corner, was always amusing; Waid’s able to nail the egotism of the character and the various Victorian tropes, and delivers suitably clever plots. It feels like a decent TV show, the kind where the viewer develops affection for the characters, and keeps watching to see how their will-they-or-won’t-they relationship develops; it’s easy to see why Marvel 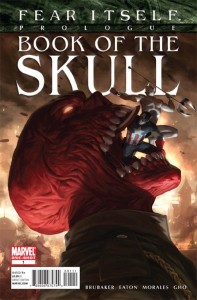 (who, via their purchase by Disney, now has most of the Crossgen properties), picked this as worthy of a new test-drive mini-series.

The next big crossover event starts, as Baron Zemo and Sin, the daughter of the original Red Skull, look for a buried Nazi occult artifact, and there’s an extended WWII flashback involving Captain America, Bucky and the Invaders. It’s a prologue, so don’t look for more than a minor resolution to the plot (Sin gets her Maguffin), but Brubaker’s scripting makes this a good buy for current Cap fans, and of course anyone planning on following the whole Fear Itself thing will find this worth a look. 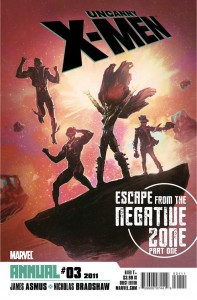 This features the small-scale return of a Marvel ’90s tradition: the annual-crossover event, as Cyclops, Hope, Namor and Dr. Nemesis get caught in an equipment malfunction that strands them in another dimension, and they have to “Escape From the Negative Zone,” in a story that continues in the Steve Rogers: Super-Soldier and Namor annuals due in a few weeks. I’m not familiar with Azmus’s work, but his first-panel callback to the Claremont-era X-titles is a winning ploy, and his handling of the Cyclops/Hope dynamic, and pairing of the smart-ass Dr. Nemesis with the exasperated Namor, all work well; Bradshaw’s art is just cartoony/mangafied enough to be interesting, without calling too much attention to 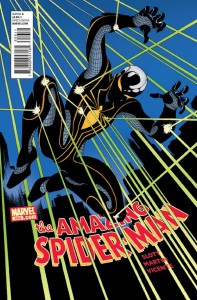 Stung by a supporting character’s death, Spidey decides that he’s going to devote all his efforts to making sure no one dies on his watch again. That’s an impossible task, of course, but a noble one, and his new job gives him access to the resources to do it, even against current (and kind of boring) psycho bad-guy Massacre. This isn’t going to end well, and the another-new-costume bit causes more eye-rolling than excitement, but Spider-Man’s always been about the stubborn idealism, and 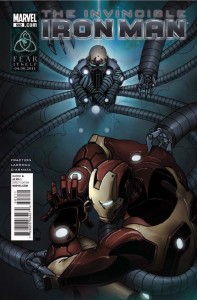 The second of a three-part story involving Doctor Octopus, who’s dying and wants Tony to fix it, or at least admit that he’s too stupid to do it, while the threat of a standard Doc Ock nuclear weapon hangs over NYC. Fraction is really good at getting inside the head of insane super-villains (see his Mandarin appearance in last summer’s annual), and his Ock/Tony verbal sparring (Tony, trying to find a spy in his own organization, picks Octopus’s brain about it, figuring that one psycho should be able to anticipate another), intercut with scenes of Pepper trying to deal with Doc’s minions, Elektro and the Sandman, make 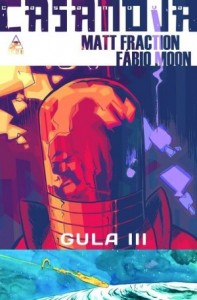 this an entertaining comic.

More Fraction, still reprinting his gonzo multi-dimensional extravaganza, and worth it for the high-concept hijinx, the fabulous Fabio Moon art, and the new six-page interview with artist Brendan McCarthy (whose Spider-Man/Dr. Strange Fever mini-series was such a Ditko-inspired hoot last year) as an extra bonus in the back of the book.

With 40 years of experience in comic reading, collecting and reviewing, English Professor Phil Mateer has an encyclopedic mind for comics. Feel free to ask Phil about storylines, characters, artists or for that matter, any comic book trivia. He will post your questions and answers on the AABC blog. His knowledge is unparalleled! He is also our warehouse manager, so if you are looking for that hard to find comic book, ask Phil!
View all posts by Phil →
This entry was posted in Reviews and tagged Bad Dog, Captain America, Casanova, Crossgen, Ed Brubaker, Fabio Moon, Fear Itself, Frazer Irving, Iron Man, Joe Kelly, John Rozum, Mark Waid, Matt Fraction, Red Skull, Ruse, Spider-man, X-men, Xombi. Bookmark the permalink.