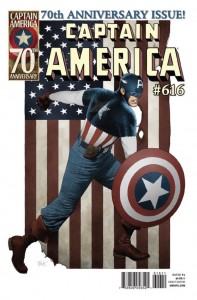 Captain America #616 — Writers: Ed Brubaker, Howard Chaykin, Cullen Bunn, Mike Benson, Frank Tieri, Kyle Higgins & Alec Siegel; Art: Travis Charest, Howard Chaykin, Mike Deodato, Ed McGuinness, Jason Latour, Paul Grist, Paul Azeceta, Pepe Larraz This 70th Anniversary issue offers over 100 pages (I counted 104, plus the covers) for $4.99, so it’s a great deal, especially given that list of creators. Brubaker offers a one-page origin, a 15-page chapter in the regular book’s ongoing saga (involving Bucky/Cap in a Russian gulag), and another 15-page story with Steve Rogers trying to decide whether to don the uniform again in Bucky’s absence. Howard Chaykin offers a 14-page tale with a long ’40s flashback (good news, since he draws those fashions and times more accurately than just about anyone), while Paul Grist, Englishman that he is, gets to do a Cap/Bucky/Baron Blood vampire story from W.W.II. The rest is scattered in quality (Tieri’s story is good setup and stupid ending, which ruins some perfectly good Azeceta art), but there’s more than enough here to keep any Cap fan entertained 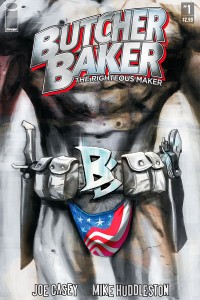 My first thought was that this book very badly wants to be Casanova — Huddleston’s art, both in style and layout, is reminiscent of Fabio Moon’s, and the story has the complicated stew of sex, satire and hard-assed adventure of that title — but then I remembered that Casey was doing this kind of thing long before Fraction, especially in Automatic Kafka (which came out, good Lord, almost ten years ago), so it’s less an imitation than an old master reasserting himself. The satire gets a little broad at times, but there’s a serious underpinning to it (read Casey’s long editorial at the end of the book), and the art is undeniably fun to look at; if you’re old enough for an R-rated book, and want a high-energy narrative that doesn’t talk down to the reader 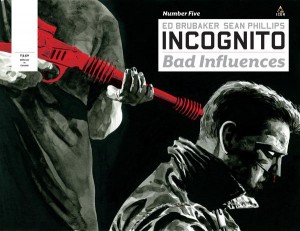 and offers gonzo political opinions along with lots of big trucks and things that blow up real good, this comic might be for you.

Yes, things end badly (as I keep reminding people, it’s a noir series; no one ever really wins), but at least the door is left open for a sequel, and Brubaker and Phillips make such a smooth-operating team, and are so good at this particular brand of shadowy, hard-boiled superhero action, that it’s hard to complain; we can just appreciate the entertainment and rejoice at the editorial announcement of a new Criminal mini-series coming in June, which Brubaker calls “probably the most ambitious thing we’ve ever done.” Yes, please: I’ll have some of that, 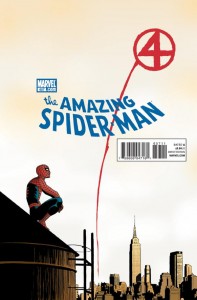 Pete shows up at the FF’s and everybody reminisces about Johnny (each story gets a separate artist, hence the long art-credit list), and then, in a development that would need a “spoiler” warning if it hadn’t already been splashed across ads for every Marvel book in the last two months, he’s invited to join the team. Having a loner like Spidey in a new full-time research job and in the Avengers and in the FF doesn’t just stretch credibility so much as freeze-dry it, break it into small pieces, run it through a trash compactor and bury it in a landfill, but hey: there are some good bits here, the Templeton art is fun, and the stories might be intriguing for a while, so it would be churlish to start 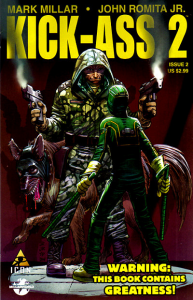 muttering about continuity and how there are only 24 hours in a day, even for a guy with radioactive-spider blood.

A new super-group (well, “super” in the context of Kick-Ass) debuts, some criminals get raided, and Sophia the Wonder Dog shows why she’s part of the team. It’s the same combination of snarky commentary, high-school angst and tongue-in-cheek, ultra-violent action as always, beautifully rendered by Romita, Jr. and Palmer, and by now you probably know whether you like it or not; there’s no question it’s empty calories, with little socially-redeeming value, but it’s also oddly compelling, and just about impossible to resist. 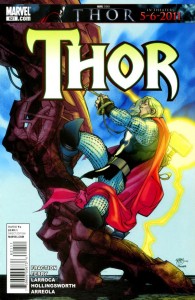 The conclusion of Fraction’s first big arc, and while it works fine it comes off as a little disappointing; the climax happens quickly, the hero’s encased in a big brown mud casing instead of a colorful costume, and there just isn’t the pizzazz that one might expect. This is largely because the story flow is much more set up for the trade — readers buying this for the first time are coming in at the tail end of a long battle — so the whole thing should read better in the inevitable collection that they’ll rush out just before the movie (the coloring continues to be amazing, and the art should look spiffy with the 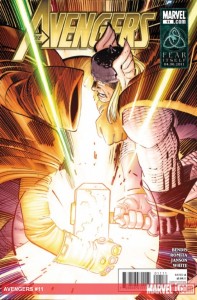 better paper and production values of the collected version, too).

The Hood continues his hunt for the Infinity Gems, while everyone else scrambles to keep up, and a new (but not unexpected) player enters the game. Bendis’s down-home dialogue and knack for realism sometimes clash with big cosmic storylines like this; the reader gets whipsawed between the small matter-of-fact conversations and the universe-changing events. Maybe that’s partly the point, though — there’s a lot of narration about how no one human can wield that kind of power — and the Romita, Jr./Janson art does a lot to give the events gravitas and weight (it’s a tribute to JRJr that he can be so effective in both a gritty, “real” book like Kick-Ass and the ultra-astral-omni-galactic goings-on that are delivered here). 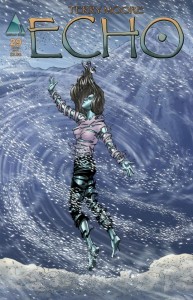 Racing toward the conclusion, so we get 18 pages of story that don’t satisfy that much on their own, much as in Thor (but even less so, since we aren’t at the conclusion yet). Still, for readers who are hooked into the what-happens-next soap-opera aspect of the story, it’s another installment, and it offers the usual good-looking art, along with another page or so of some old friends from Strangers in Paradise (Moore having served notice last issue that the two stories share the same world). Brian Hibbs had an interesting column up this week where he talks about how fans who wait for the trade miss the anticipation, the can’t-wait frustration that comics, or TV series like Lost, or similar episodic stories deliver. He’s talking about Walking Dead #83, and a major oh-my-God development in that book this week, but a book like Echo #29, where a years-long story is hurtling toward the 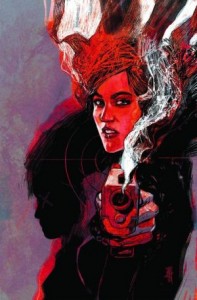 finish line and readers have no idea what to expect, is a good example of that, too.

Stuff I bought, but don’t have much new to say about, so look up old reviews in the archives if you’re interested):

Stuff I didn’t buy, but wanted to mention: 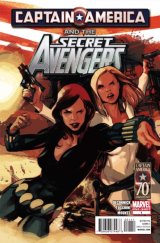 I had to mention this because it’s a major example of false advertising — Cap doesn’t even appear in this comic (they talk to him on the phone in one panel), and, despite the title, neither do most of the Secret Avengers; instead, it’s a Black Widow/Sharon Carter team-up that reads like it was meant as a fill-in story for Natasha’s own title, which, given that book’s cancellation, had nowhere to go. It’s a shame that readers are going to feel cheated (because they’re being cheated, damn it!), because the story itself is inoffensive and mildly entertaining, but whichever Merry Marvel Marketer thought up this scam deserves to be fired.

With 40 years of experience in comic reading, collecting and reviewing, English Professor Phil Mateer has an encyclopedic mind for comics. Feel free to ask Phil about storylines, characters, artists or for that matter, any comic book trivia. He will post your questions and answers on the AABC blog. His knowledge is unparalleled! He is also our warehouse manager, so if you are looking for that hard to find comic book, ask Phil!
View all posts by Phil →
This entry was posted in New Comics, Reviews and tagged Avengers, Butcher Baker, Captain America, Echo, Incognito, Kick Ass, Spider-man, Thor. Bookmark the permalink.

One Response to Phil’s Reviews — Stuff I Bought #193