I have nothing clever to say this time around, let’s do this! 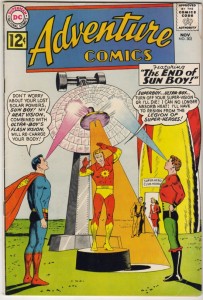 By a specific request from one commenter (Bill D…, who could that be?)  I have decided to take a look at some good old fashioned Legion stories.  To start off, this isn’t just the Legion of Super-Heroes.  It, of course, involves Superboy well before he was Superman in a story that involved robots!  Not much there content wise, but the Sun-Boy story was a really good one.  Splitting this book into two stories both helps and hurts it.  Everything happens nice and quickly, but it also ends really abrupt.  I loved the doofiness of Sun-Boy losing his powers and trying to find a multitude of ways to get them back.  Yes, that includes a dinosaur breathing fire on him, which actually works!  Very interesting stuff, and again, robots! More info can be found HERE

Oh the Legion.  So many many reboots.  But that just means there’s plenty of stuff for you to read! Currently they can be found in Adventure Comics and the Legion of Super-Heroes.  I’m sure they’ll show up in whatever big DC event comes around next

One thing I can always say about Marvel books is that I know exactly who wrote and drew them.  They always have credits regardless of which story it is.  And that’s nice.  ANYWAY.  This is part of a larger narrative, as much of the Spider-Man mythos is.  It’s probably the 15th appearance of Doc Ock and it’s only the 55th issue.  But the thing that really works the best about this book has to be Romita’s pencils.  As always, Stan Lee writes like Stan Lee, but the fight scenes are so clean, the character work is fabulous to look at, and every single character has their own distinct style.  I’ve professed the fact that I”m not a Spider-fan several times on this blog, but hot damn, some of these older books are just very, very pretty.  Take the hint modern Marvel artists!  More info can be found HERE

Ha, Spider-man.  I bet it’s hard to find some stuff with him in it these days… Oh wait.  There’s Amazing Spiderman three times a month, Ultimate Spider-man, New Avengers, Web of Spider-man, Marvel Adventures Spider Man, and even the Amazing Spider-Girl.  Find something, enjoy it, love it; there’s plenty out there for everyone.

Where do I even begin to discuss Rip Hunter?  I’ve read one issue of this series (The Hitler one; look it up, it’s awesome), and this issue is just about as good.  In it, Rip has to help Kublai Khan and prevent an assassination plot while also trying to stop some character that I couldn’t possibly tell you why he was even there.   Mix in a bunch of characters that I’m not familiar with, doing weird things while running around with the Huns.  Add two people using catapults to convince the natives they can fly, and blowing up a statue of Buddha with explosives to show their “magic,” and you get why this comic is awesome.  Rip Hunter is just another classic example of DC Silver Age madness.  More info can be found HERE

Rip Hunter can now be found in a couple different places.  He first popped up in the modern era for Booster Gold, working as a Jiminy Cricket type conscience.  Also, he’s trying to pick up Bruce Wayne in the Time Masters: Vanishing Point mini-series (available now!)

And that’s it!  I literally have nothing clever to say to end this…