The Latest and (Mostly) Greatest #16 by Dan! 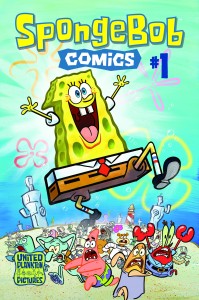 Yes I am currently watching SpongeBob; why do you ask?  I was a little surprised by a couple of things.  First, I’m surprised this comic exists.  Second, I’m surprised this comic wasn’t made much sooner.  Third, I’m surprised that it actually captures the fun of the ridiculous tv show that accompanies it.  This is more of an anthology book with several stories throughout Bikini Bottom.  At times bizarre, at times hilarious, it’s a pretty good representation of what the show normally offers kids.  It also has James Kochalka in the back, so if that sells for indie people, there ya go.  It’s a Bongo comic, so it’s up to the same standards as the Simpsons comics, and that usually means consistency. 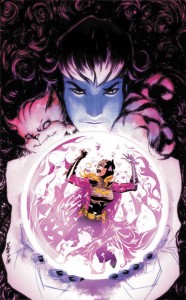 My sister hit this one on the head when she said “that writer makes me not hate Stephanie Brown, even though I know I hate her.”  This issue is no exception.  Klarion the Witch Boy messes with his cat (won’t let him fall in love), and it all goes horribly awry.  This is the kind of one-shot issue that is why comics are made.  I enjoy the way Miller makes Stephanie a smart-ass but still enjoyable as a character.  Not to mention that Nguyen is really showing off his style here.  He makes a full design transformation when Batgirl and Klarion head into his weird witch-magic-world, and at first I was sure it was done by two different artists.  It’s not, Nguyen is just that good.  Check out this book, if only to look at pretty pictures.

I find myself sad that I like this comic so much.  It’s inconsistent schedule and reliance on continuity should annoy me.  But every time I see an issue on the stands, I get a little more excited.  I’m jonesing for that new Flashpoint event, especially if it changes all the regular titles as drastically as it does.  This is the building block of the DC Universe, and it’s the book that I would probably most recommend to the casual reader.  With only 9 issues back, it’s easily accessible to anyone that wants to.  Manapul’s art is also very pretty, working in a slightly cartoon style, but still having action scenes that really flow.  It’s very enjoyable.

Within two pages I was sold.  The basic premise of the latest story from Northlanders is “300, from the view of the Persians, but with French people.”  The attackers see themselves as trained liberated fighters, and they don’t see why Paris is being so difficult with their takeover.  It’s actually a pretty genius issue, and it’s immensely fun to look at.  Wood always throws in different views on religion, and that’s no exception here.  Northlanders is a book where Brian Wood can voice some strange opinions and viewpoints, but also show the world new art styles and still maintain his “underground” reputation. 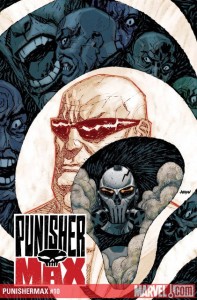 With the mediocre Ultimate Avengers arc done, Steve Dillon turns back to his roots with the Punisher, and it’s sick.  Bullseye is still a lunatic, and it’s pretty freaking crazy.  Mass murders during soliloquies, Punisher killing crooked cops, the Kingpin losing control, and all building to a crescendo to be wrapped up next issue.  I forgot how freaking sweet this entire book is, and in ONE issue, I was reminded.  That’s how you know a comics great, after a several month long delay, I know exactly where I am in the story when I pick it up again.  Wonderful stuff.

Stuff Worth Noting: (Not the Best, But You Should Still Know It Came Out)

Secret Warriors #24 Writer: Jonathan Hickman Artists: David Marquez & Alessandro Vitti: Secret Warriors keeps heading towards its conclusion, but this issue was kind of predictable.  An off issue of an otherwise amazing series.

Incognito #3 Writer: Ed Brubaker Artist: Sean Phillips: Incognito keeps moving along like it always does.  Same quality, and consistency, which I always love.

New Avengers #9 Writer: Bendis! Artist: Howard Chaykin and Mike Deodato: Weird split of past with Chaykin present with Deodato, but it works.  Still not my preferred Avengers title (That would be Secret…)

Justice League: Generation Lost #19 Writer: Judd Winick Artist: Fernando Dagnino: That has to be a fake-out right?  How does Max Lord have a bullet that can shoot through head armor/alien technology.  I don’t really believe what happened in that issue.

Batman: The Brave and the Bold #4 Writer: Sholly Fisch Artist: Rick Burchett: Just ridiculous enough to be awesome.  I can’t even explain to you why.

Deadpool Team-Up #885 Writer: Rick Spears Artist: Phil Bond: I can’t believe Bond is doing the art on this.  But it involves a cow from hell, Vampire-cow?..  something like that.

X-Factor #215 Writer: Peter David Artist: Valentine De Landro: This story continues to be the best X-book on the market.  Plots move along every issue, and it’s interesting.

The Weak of the Week (Definitely not the Best, If You Know What I Mean):

I write these reviews with great sadness. It’s not like we’re having obviously bad writers an artists doing obviously bad comics.  We have capable creators just putting out mediocrity.  I don’t know if anyone really cares that much about the Ultimate Universe anymore, but how can they not be disappointed?  Originally it was supposed to be used to latch in new audiences.  Now it’s built up it’s own continuity so badly that it can’t even work for consistent readers.  Very, Very disappointed.

And that’s it!  More later this week!