Well there’s lots of good stuff here.  Let’s do this! 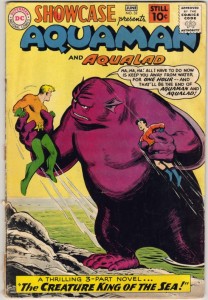 You know, it’s good to go when the editor thinks it’s necessary to explain how Aquaman and Aqualad talk to each other under water.  Oh the 1960s!… This issue is all about Aquaman fighting some giant creature created by a WIZARD From the Past (dun dun dunnnn…) That huge creature begins literally beating up all kinds of different animals throughout the sea (no seriously, he hits a whale shark with a funnel.  The creature is trying to steal gold…yes, that’s literally all the plan is.  It is very pretty to look at.  Everytime Aquaman is underwater he glows green which really makes him jump off the page.  As always, Aquaman and his water pals save the day, and overall, it’s another fun story.  More info can be found HERE

Aquaman eventually got gritty.  He grew out his hair and his beard, then lost an arm, then died.  He’s back now in Brightest Day, without a beard.  But he has lost his hand.  Just check it out to understand it. 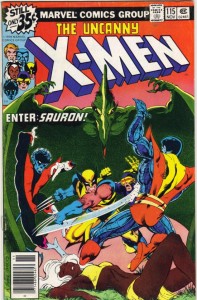 John Byrne makes everything look pretty.  This issue is the first attack of Sauron against the “all-new X-men”.  It’s very much just a big fight issue, which happens a surprising amount when Claremont is writing.  It’s covering all the bases possible with appearances from Ka-Zar, and utilizing all the powers of the X-men individually.  Like I said, it’s totally chaotic, but someone like Byrne knows how to make it all work.  I honestly think this run of comics is popular because the art picks up the overbearing plots that these issues have.  What was weird to me was how much time was spent on Ka-Zar’s story when they were just gunna say no.  I know they did end up joining him, but why have those extra pages of rejecting his story before accepting it.?  More info can be found HERE

The X-men are of course, still around.  Sauron showed up in early issues of New Avengers, but hasn’t been seen much lately.  Ka-Zar was also in those issues, and I can’t figure out where else he has been.  Ultimates 3?  I think he showed up in that as well. 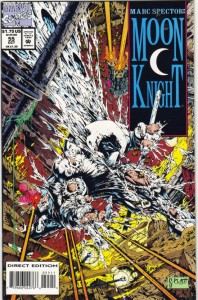 So when this comic came out, I was 5.  How does that make you feel?  Moving on, why am I reading this issue?  Steven Platt provides the art for this story as it nears the end of it’s run.  These are actually really rare issues, and I wanted to know if it’s only because of rarity or quality.  Long story short, if Liefled and Silvestri had a baby, and it was inked by Macfarlane, you’d get the art on this comic.  It’s so bizarre and so gloriously 90s that I at least smiled while reading it.  As for the plot, it’s pure insanity.  I find myself wondering what the hell’s going on at the same time as I wonder where it’s going next.  It’s the kinda story that’s so over the top that it’s almost genius.  Almost.  It’s just crazy enough to entertain me, but nowadays it’s something that would only been seen in an Image book.  More info can be found HERE

Moon Knight had his own title that was pretty good.  Now he is part of the Heroes for Hire and the Secret Avengers.  I’m expecting another ongoing series soon, but nothing in the pipelines right now.

And that’s it!  Enjoy your weeks and I’ll see you again in two!