The Latest and (Mostly) Greatest #13 By Dan!

The last reviews of the New Year! Don’t forget to come to the sale!  Heck, why are you even reading this, go to the sale now!

Kolins is completely in his element whenever he does a Rogue profile, as can be seen in this issue.  Dealing with how the Reverse Flash came to be, Kolins is able to make every word that Johns puts on the page really come to life.  The story itself is bizarre, and sounds like an idea that is more out of the Morrison book of ideas.  Reverse Flash doesn’t like the way his life is developing, so he just rewrites it through time.  This makes the story constantly changing, puts trust in a unreliable narrator, and overall puts together one of the most interesting issues of the Flash we’ve seen yet.  Manapul comes back next issue, and we get a good story, but these last two issues have been a lot of fun. 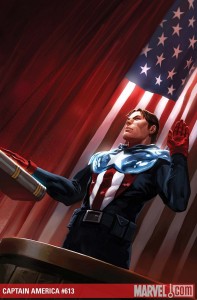 Things keep building and building through this noir-superhero book.  This book was flatlining a little with the latest stories, but this is probably the best stuff I’ve seen since the Death of Captain America storyline.  All you need to know about Brubaker is that he makes the Falcon interesting, used the Red Skull’s daughter to become the new Red Skull, and has planted the main character in jail.  It’s a bit of a rehash of his Daredevil work, but it’s still pretty sweet.  Guice draws the hell out of it, and it’s again becoming one of the best books on the market. 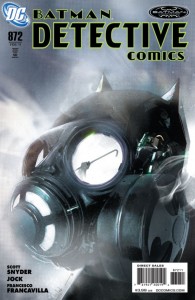 With all apologies to fellow AABC staffer Ashley, I love Jock’s art.  It’s definitely not for everyone, but the bizarre angular style of everyone that is drawn works out really well.  The story itself is interesting, and it’s one of the few cases where a back-up is actually working.  Francesco Francavilla does the art on that one, and it’s probably the most interesting one I’ve seen DC supply.  Scott Snyder is using the same approach Greg Rucka did where the back-ups actually link to the main story.  However, that’s going to end soon, when the price goes to $2.99, but right now it’s been a clever way to work it all out.  Fun stuff. 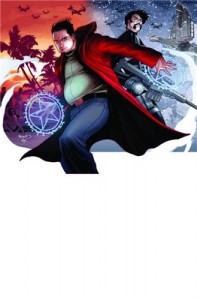 Have I mentioned that this is the best damn comic on the market right now.  Because it’s pretty freaking close.  The story has been shockingly consistent for 23 issues, and hasn’t shown any sign of stopping.  This issue sees the return of Druid, and brings along all the back story you could possibly need.  Making the fat kid slightly less fat (though you could hardly tell), and helping him overcome his fears of power lead to a reunion with Fury and his crew that has some pretty kick-ass results.  This story is seriously fantastic, and when it’s over (this year?)  I’ll be really, really sad about it. 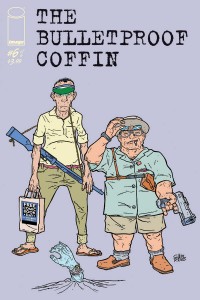 So Hine and Kane take the Animal Man (or Automatic Kafka) route of introducing the characters to their creator, but they do it more in a Simpsons episode way. I’m nice enough to assume that this is not what they really look like, but how hilarious would that be?  This story comes to it’s ridiculous conclusion with the death of the Silver Age, leading to a Rob Liefeld like re-do.  Everybody does end up happy, but in a very Meta sort of way.  Also, the dedication to Spandax Groyne really works out if you’re paying any attention.  Long story short, sell out as quickly as possible. Thanks Kane and Hine!

Stuff Worth Noting (Not the Best, but you should still know it came out)

Green Lantern #61 Writer: Geoff Johns Artist: Doug Mahnke: Still one of the most consistent books out there, but I’ve said plenty.  Just go buy it!

S.H.I.E.L.D. #5 Writer: Jonathan Hickman Artist: Dustin Weaver: Still an interesting comic, but the slow release is definitely hurting it.  I like it, but I’m not sure anyone else will have the patience.

Avengers #8 Writer: Brian Michael Bendis Artist: John Romita Jr.: Another comic that’s still shockingly consistent.  I like the direction with the Infinity Gems, and can’t wait to see what’s next.

Ultimate Avengers 3 #5 Writer: Mark Millar Artist: Steve Dillon: Still good, but I’m not sure it’s worth the $3.99 price tag.  Also having the same kind of splash page two issues in a row is not a good idea…

Echo #27 Writer/Artist: Terry Moore: Things are coming to their end, and in a strange fashion.  I have no idea where this story is going, and that’s what makes it so interesting (just no more astrophysics talk…)

Hellboy The Sleeping and the Dead #1 Writer: Mike Mignola Artist: Scott Hampton: Hampton art is the real draw here, and if you don’t know the drill on Hellboy right now, I can’t help you.

Teen Titans #90 Writer: J.T. Krul Artist: Nicola Scott: The Scott art is wasted on the mediocre story, but it’s getting better, I promise.  Worth it if you like something different from your Teen Titans.

Tiny Titans # 35 Writer/Artist: Art Baltazar/Franco: Yup kids comics.  Still some of the best out there, so you can get over it.  Hilarious.

The Week of the Weak (Definitely not the best, if you know that I mean…)

What really shocks me is that the writing on this story is passable.  It’s not the worst thing I’ve ever read, a little doofy, but still passable.  It’s the art that’s really the deal breaker.  I can’t stand Finch’s style of too many line and too many butt shots.  Add to that a repulsive (not in a good way) version of Killer Croc, and ugliest (again, not good) Penguin story I’ve ever seen.  If this had anyone else on art, it may be better, and that completely catches me by surprise.

So.  This comic exists.  The story itself is completely passable, and I think I would enjoy it, if I could get passed the crap that Andrews puts on the page.  Awkward builds for characters, mediocre action sequences, and a plethora of Emma Frost boob-shots make me wonder just what kinda people are buying this book (oh wait, I know exactly who’s buying.  gross…)

And that’s it!  See you next year folks, or tomorrow, same thing.  In the meantime, go to the sale! Save Money!

One Response to The Latest and (Mostly) Greatest #13 By Dan!