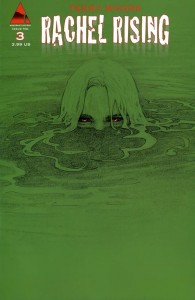 We’re still in “set up the mystery” mode, as the title character, having clawed her way out of a shallow grave, exhibits spooky precog powers and watches bad things happen to other people. There’s some kind of possession thing going on, and it’s all very well staged, and drawn very prettily too. Echo, Moore’s last effort, was remarkably well thought out, so I trust that the eventual explanation here will be a lot of fun, and involve a lot of action. With only four issues so far, readers still have time to get in on the ground floor of this story, and they’ll be happy if they do. 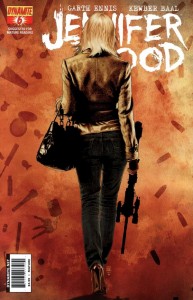 Ennis ends his first arc with this character, as she enacts revenge and we get an origin story. The title’s continuing, but not with Ennis, so while I’ll glance at the next issue I doubt I’ll get it; the concept (suburban housewife is the Punisher) isn’t that compelling, but the execution (you should pardon the pun) has been great, and it’s hard to see how anyone but Ellis can pull that off over the long haul. 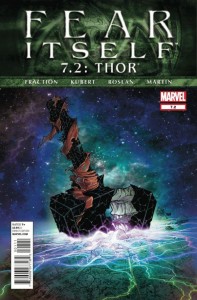 Like last week’s Captain America one-shot, this epilogue sets up a new status quo for its focus character’s comic (Odin’s gone; Asgard is ruled by triune goddesses (Freyja, Gaea, and Idunn); a new and much rougher-around-the-edges Thunder God has somehow materialized (no, not Thunderstrike, although that would have been amusing), and Thor, who’s dead, now… well, if you read the Cap tie-in last week, you know where this is going). If you’re currently reading Mighty Thor, you’ll want this, and will be entertained by the Kubert art and Fraction script; if you don’t care about Thor, you won’t need to buy this book. 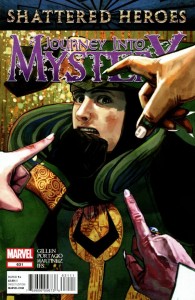 Still the better of the Asgardian books, with its focus on the wily-but-goodhearted teen Loki, especially because Gillen knows just how to make him both sympathetic, impressively smart, and a lot of fun (Loki’s glee at his own cleverness is hard to resist). I miss Doug Braithwaite’s art, and am not that big a fan of Portacio’s Image-y, toothy style, but watching Loki deal with the new rulers of Asgard, and with the many ways his perfectly-justified actions are coming back to bite him in the butt, looks like 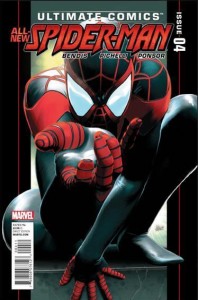 it’ll be entertaining for some time to come.

Two from the Bendis Comics Factory: UC Spider-Man continues Miles’s origin, tying it closely into the end of the earlier Ultimate Spider-Man book, and, via Gwen Stacy, bringing in the old “great power/great responsibility” theme; the idea of a… (sixth grader? He’s definitely not 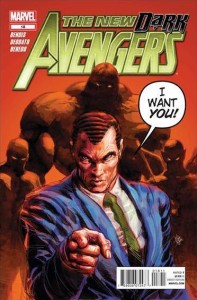 very old…) compelled to take up the spider-mantle, and the way it all echoes earlier events in the book’s history, all make it worth reading. New Avengers doesn’t focus on the good guys at all, but on the newly-escaped Norman Osborn and his gathering of allies, as he puts together his own new Dark Avengers team. Bendis is fortunate on both books: the stories aren’t spectacular by themselves — they’re both pieces of a larger arc — but they’re above average, and the two artists, Pichelli and Deodato, are so well-suited to their respective roles (Pichelli’s lithe figures are awesome at getting her young protagonist and his friend just right, while Deodato brings the heavy super-hero-posing artillery for all the villains flocking 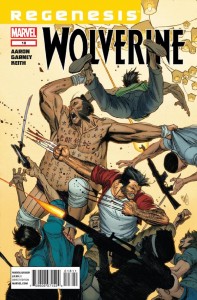 around Osborn) that the reader can’t help but admire and enjoy these comics.

Two from writer Jason Aaron: Wolverine, after a couple of depressing arcs, is in the middle of a rollicking goodbye-to-San-Francisco adventure involving vast labyrinths underneath Chinatown, drug runners, dragons, Fat Cobra from Iron Fist, and other delights; it’s Aaron at his gonzo 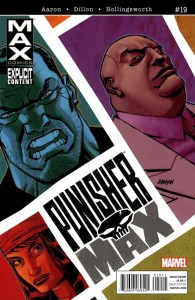 grindhouse best, energetic and not too serious. PunisherMax is similarly manic (it’s got Elektra seducing both the Kingpin and his wife, playing both off against the middle and the Punisher, all rendered with Steve Dillon’s usual graceful line and coldblooded eye for violence. As with Bendis, Aaron is dependably entertaining, and even more so with good art: both of these books are entertaining and fun comics. 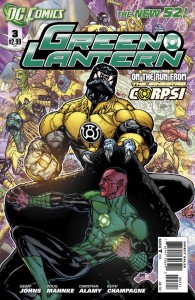 I’ve given up reviewing all the DC titles each week (there’s only so many ways you can say “mediocre,” and, by definition, half of the week’s books are going to fall into that category), so let’s just look at the ones I’m buying. GL falls into that category based both on Johns’s script (he’s making a habit of going against reader expectations here, to the benefit of the story) and Mahnke’s art (his Sinestro, all beady-eyed and deadpan, is a menacing hoot). 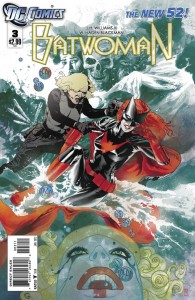 The writing and plotting are just OK (this title misses Greg Rucka), but then they’re both just carriers for the lush, imaginatively-designed art; the main character’s civilian guise, with her flaming-red hair and alabaster skin, is both striking and sexy, and the visuals carry the reader along on a happy cloud of eye candy. 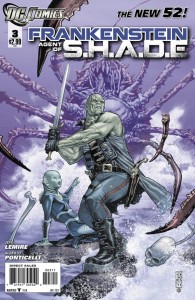 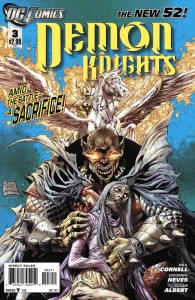 group characterization; Lemire has a surreal, anything-goes indy sensibility (one that works well with Grant Morrison-created concepts like Frankenstein), while Cornell taps a deep knowledge of superhero tropes that helps him equally well with all the 3rd-string characters and DC backstories he’s dealing with in this gritty Justice League Middle Ages romp.

Batgirl and Nightwing have a long conversation, and the plot inches forward. This book is pretty far down on my list right now, but Simone’s history as a good writer has kept me on board so far (and the easy familiarity between Babs and Dick here is a good indication of its potential); if things don’t start paying off big-time in the next issue or two, though, this book is probably going to get abandoned. 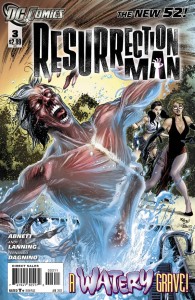 Another book that’s barely making the cut. This one stays because the new-powers-every-life concept is fun (and reminds me of the ’60s Dial “H” For Hero, a guilty pleasure even back then), and because, like Simone, Abnett and Lanning have a long and entertaining track record. Like Batgirl, though, something startling and compelling had better happen soon, or my $3 will end up somewhere else.

With 40 years of experience in comic reading, collecting and reviewing, English Professor Phil Mateer has an encyclopedic mind for comics. Feel free to ask Phil about storylines, characters, artists or for that matter, any comic book trivia. He will post your questions and answers on the AABC blog. His knowledge is unparalleled! He is also our warehouse manager, so if you are looking for that hard to find comic book, ask Phil!
View all posts by Phil →
This entry was posted in New Comics, Reviews and tagged Batgirl, Batwoman, Bendis, Demon Knights, Fear Itself, Frankenstein, Garth Ennis, Green Lantern, Jason Aaron, Jennifer Blood, Journey into Mystery, New Avengers, Punishermax, Rachel Rising, Resurrection Man, Terry Moore, Ultimate Spider-man, Wolverine. Bookmark the permalink.