It Came From the Back Room #35 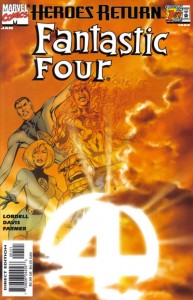 Standard recap: I’m slowly going through AABC’s one-million-plus back-issue room, restocking the boxes on the sales floor and pulling stuff to sell as discount/overstock/special items (these are featured at the discount racks at the west end of the store for two weeks after each post, and then go to the discount racks on the east end of the store for a few weeks, and then disappear into our warehouses, so get them while you can). I’m going through the alphabet backwards (don’t ask), and at my speed (especially with the school semester in full gear), this amounts to a two-year project.  This week, the focus continues to be on the letter “F,” and on a series that Marvel has frequently billed as “The World’s Greatest Comic Magazine” — the Fantastic Four. Last time, we made it up to the end of the John Byrne era — issue #293 — and now we’ll look at some of the subsequent issues. 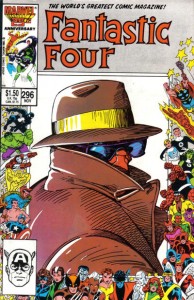 The first Byrne replacement team is writer Roger Stern and penciller Jerry Ordway; Stern’s a good choice, a smart, nimble scripter who at this point had already revitalized Spider-Man; Ordway, a chameleonlike artist, only stays for a few issues (doing his best Byrne imitation), and then leaves. After a big 25th-anniversary issue in #296, with a 64-page script by Stan Lee and art by, among others, Barry Smith, John Buscema and Mark Silvestri, Stern comes back partnered with two Buscemas — John on layouts/pencils, and brother Sal on pencils/inks —  for issues #297 – 302; Sal leaves at that point, but John sticks 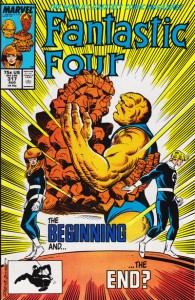 around (joined by longtime FF inker Joe Sinnott), and new scripter Steve Englehart arrives with issue #304, to settle in for a two-year run.

Englehart, who had left Marvel years before after acclaimed runs on Captain America, the Avengers and Dr. Strange, and, after a stint at DC, had spent the past few years writing novels, proves something of a disappointment: his scripts are solid enough, but lack the spark and crackle of his earlier tenure at Marvel, and sometimes seem wrongheaded (his first FF move is to send Reed and Sue away, and bring in Crystal and the female super-wrestler version of Ms. Marvel as replacements). After #309, Buscema is replaced by Keith 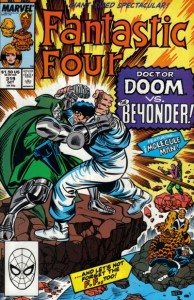 Pollard, and things get… strange; the Thing mutates into an even more extreme, rocky-pointed version of himself, while Ms. Marvel gets a dose of cosmic radiation and becomes (wait for it) She-Thing (no, actually they keep calling her Ms. Marvel, but she now resembles the early, leathery-skinned Ben Grimm from the first year or two of FF). After a few issues of trying to kill herself (a development that comes off as more comic than tragic), she settles down, develops a relationship with Ben, and then Crystal and Johnny break up, Crystal leaves, and its the Fantastic Three who embark on an adventure that starts with the Mole Man, picks up Dr. Doom along the way, and ends with a Doom/Beyonder rematch in #319, and a Thing/Grey 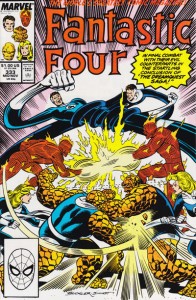 Hulk battle in #320. Eventually, Reed and Sue come back, the Thing reverts to Ben Grimm, and the entire team get captured by a rogue Watcher and stuck in suspended animation while evil clone versions of themselves menace New York City (Rich Buckler takes over the art from Pollard somewhere in there too, but in the confusion no one notices). This not-that-good (but, at least, never dull) circus ends with issue #333, setting up a relatively brief but much-appreciated era in the team’s history: 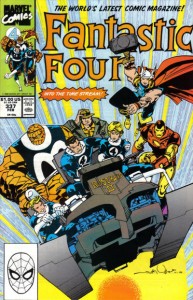 Simonson, who’s best known to Marvelites for his earlier run on Thor (especially after this summer’s movie, and the gorgeous-looking Omnibus edition of his work on that title that it generated) starts as FF scripter with issue #334 ; Rich Buckler and Ron Lim do the pencils in that issue, #335 and #336, but Simonson himself takes over as writer and artist with #337, and that leads to a lot of fun: cosmic tales involving time travel and battles with Kang and Galactus (including a Kirbyesque Thor/Guardian fight), Celestials, alternate 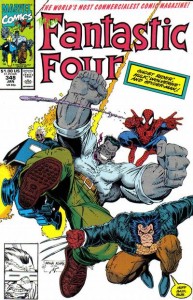 universes, dinosaurs, and, ultimately, a three-part story in issues #347-349 (guest-penciled by Art Adams), wherein the FF get knocked out of commission and replaced by a “new” FF: Spider-Man, Wolverine, Ghost Rider and the Hulk (this was a hot comic in its day, and still a hoot, given the creative team). That’s topped by issue #350, a 38-page epic in which Dr. Doom returns (revealing that all of “his” appearances over the last few years were by robots), the Thing and Ms. Marvel finally revert to their default settings, and Doom and Reed begin a duel that, after jumping past a fill-in issue in #351, leads to FF #352, one of my favorite ’90s Marvel books. Doom has portable time- 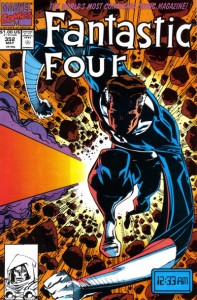 travel devices that allow him and Reed to flit back and forth over about a 30-minute span, and Simonson’s very brainy script has them jumping across all the pages of the comic (wherein the rest of the FF are fighting Doom’s troops in “real” time), like some demented find-your-own-adventure book; even the cover gets into the act. Seriously: it’s a clever idea, the kind of thing that no medium but comics could pull off, and a tribute to Simonson’s imagination and storytelling skills. Simonson’s last issue is #354, and, after another fill-in, the FF’s next long tenure begins with #356: 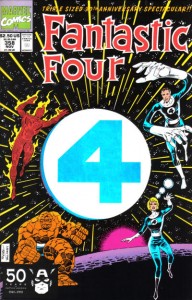 Tom Defalco and Paul Ryan have one of the longer tenures on FF, almost through to the end of the first series, as Ryan stays through issue #414, and Defalco leaves with the final issue, #316 — a total of five years, almost as long as Byrne’s. In some ways, it’s a lot like the current Jonathan Hickman FF: lots of cosmic ideas thrown against the wall to see what sticks, lots of  time-traveling/alternate universe versions of the characters, a major death (Defalco and Ryan “killed” Reed in FF #381, and didn’t bring him back for two years), and a conscious attempt to generate a buzz and a sense of wonder. That’s never quite worked for 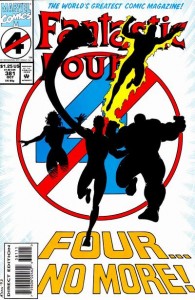 me in the Hickman stories, and it didn’t with Defalco/Ryan either: while they aren’t bad, they never resonate, and come off as competent-but-standard superhero stuff. Looking back, that might have been an age thing: Defalco’s broad moral themes and extra-emphatic dialogue, which looked like faux Stan Lee to me, would have seemed perfectly acceptable to younger readers; I’ll bet there are fans who grew up reading comics during the mid-’90s who have fond memories of those books. Next to a lot of Marvel’s other output of the period — scratchy attempts to ape Image comics, and barely-literate scripting with one-dimensional villains — the clear, heroic soap operas of Defalco and Ryan look like War and Peace. 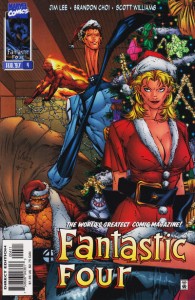 In 1996, Marvel outsourced production of four of their books (Iron Man, Captain America, Avengers and FF) to creators associated with Image comics, in a stunt not that far from DC’s current New 52. The result was FF Volume 2, leading off with a 40-page first issue with plot and pencils by Jim Lee (See? A lot like DC’s New 52…). Lee continued as penciller (with Brandon Choi scripts) for the first six issues of the 13-issue run, bowing out to Brett Booth (with some assist from Ron Lim) in issues 7-12. This version of the FF, a combination Elseworlds story and reboot, has a damp-fireworks arc — flashy start, quick descent, wet fizzle at the end — although the 13th issue, a crossover with the others that leads back to the “real”Marvel universe — is by James 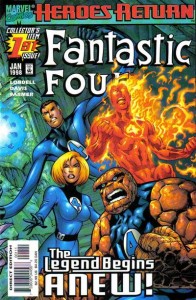 Robinson and later FF artist Mike Wieringo, and is worth a look.

Volume 3 of the FF starts immediately after the end of Heroes Reborn, and touts a back-to-basics approach; the initial issue has art by Alan Davis, and a script by Scott Lobdell — another connection to DC’s 52, albeit one that readers of his titles like Red Hood and the Outlaws or Teen Titans might not find particularly positive. By issue #4, though, Chris Claremont has taken over the scripting, 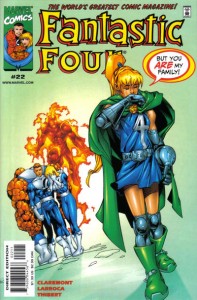 and Davis has been replaced by Salvador Larroca. That team stays on the book for a while — through issue #32 — but, truth be told, it’s hard to remember, solid but unspectacular. There’s the introduction of the adult Valeria, Reed and Sue’s second child from an alternate universe, and a long arc where Reed ends up in Doom’s armor somehow, but that’s all that remains in my memory.

The next FF era sees Carlos Pacheco coming onboard as 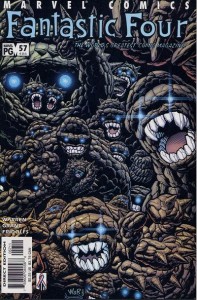 writer/artist with issues #35 – 41; he stays on after that as writer/plotter, sometimes with different artists and sometimes with himself, through issue #49, while issues #50-54 feature Mark Bagley pencils. Issues #57-59 have a story by one of my favorite comics people, the woefully underappreciated Adam Warren, with Keron Grant on pencils; it plays with the idea that all the skin cells the Thing sheds can grow to become independent zombie-like clones, and it’s both creepy and fun. 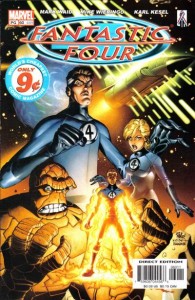 Speaking of fun, a major high point in FF history starts with issue #60: the Mark Waid/Mike Wieringo era, one that’s comparable to the Byrne and Simonson runs. That first issue is a special promotional deal — the cover price is 9 cents, although it’s a full regular comic — and it’s a good introduction to the charms of its creators: a story that nails the FF’s reason for existing, emphasizes their deep family connections and affection, and gives a reason for Reed’s formation of the team that’s simultaneously surprising, poignant and dead-on reasonable. Similar 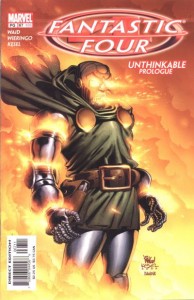 pleasures abound in the rest of the run: Wieringo’s charming, clean-lined, expressive art; Waid’s remarkable instinct for what makes the characters tick, leading to lots of fun and dramatic interaction between Ben and Johnny, between Johnny and Sue, etc.; a memorable and epic battle with a revitalized and deadly Dr. Doom (that’s in issues #67-71, except that #71 reverts back to the original numbering for #500); the FF taking over Latveria in Doom’s absence; the death of Ben Grimm, and a trip to the outskirts of heaven to revive him, culminating in a meeting 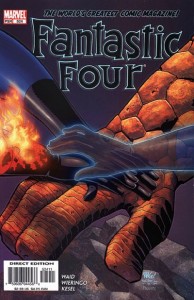 with God, who turns out to look exactly like… well, it’s in issue #511, the conclusion of the storyline started back in #67/496, and it’s just about perfect. It reads like a swan song, and might have been (then-publisherBill Jemas had, somehow, decided that the FF should be a suburban family engaged in wacky hijinks, with Reed played like Rick Moranis in Honey, I Shrunk the Kids, and when Waid balked at this clever plan, Jemas canned him; however, reaction to the move ended up, in a rare victory for a creator over a corporate suit, getting Jemas ejected, while Waid stayed on), but Waid and Wieringo continue through issue #524, the end of an unusual, interesting take on Galactus, and another perfect ending. As such, it’s the perfect place to end this post,, too; next time, we’ll try to finish the FF, and see what looms ahead in the letter “E….”

With 40 years of experience in comic reading, collecting and reviewing, English Professor Phil Mateer has an encyclopedic mind for comics. Feel free to ask Phil about storylines, characters, artists or for that matter, any comic book trivia. He will post your questions and answers on the AABC blog. His knowledge is unparalleled! He is also our warehouse manager, so if you are looking for that hard to find comic book, ask Phil!
View all posts by Phil →
This entry was posted in Marvel, News & Promos, Reviews and tagged Adam Warren, Buscema, Carlos Pacheco, Fantastic Four, Jim Lee, Mark Waid, Mike Wieringo, Paul Ryan, Steve Englehart, Tom Defalco, Walt Simonson. Bookmark the permalink.