This Cardinals game is depressing me, and I’m already exhausted, Let’s look at some old stuff!

I can honestly say this wasn’t what I was expecting.  They manage to cram four different stories into one issue and it kinda seems like the type of story that would be ideal for younger generations.  The first story is all about Batman trying to spend a million dollars, and the wacky hijinks as Superman tries to prevent it.  It was just as goofy as you think it would be, and ends with Batman mocking Robin while Superman laughs at him.  There’s a quick two-pager about “lem ‘n lime” that’s as funny as the 50’s can be.  But there’s also a Green Arrow and Speedy story that was just really weird.  First off, the artist had a weird take on superheroes wearing masks.  You kind of have to look at it to understand what I mean, but there was a panel that just made me think “ugh”.  Overall it was fun short stories that almost stand the test of time.  More info can be found HERE.

World’s Finest is a title that went on for a really long time (I don’t feel like looking up how many issues, but it was a lot).  Your best bet for a similar title is currently Batman/Superman, which is really case by case on story quality.  Also, Batman and Superman team up all the time, so just check your Local Comic Shop! 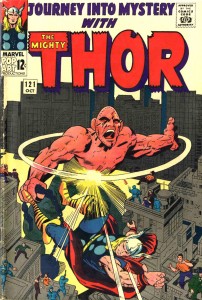 So it feels like every time I review a Marvel comic it’s a Lee-Kirby joint.  You don’t even realize just how much the two of them did until you look at all the oversized Essential line of books at our store.  I’m not a huge fan of Kirby, but I’ll always respect just how much work he did, and how consistent it was.  I think Thor is probably the best use of his talents.  The blocky style that he’s known for really works when he’s drawing a bunch of Norse Gods in helmets.  On the plot side of things, it has Absorbing Man in it.  I really don’t need to say any more than that, do I?  Probably one of the most ridiculous ideas for a bad guy aside from the Purple Man, Thor defeats him in a combination of turning him to glass, and the mighty power of an immortal(!) But wait, he doesn’t actually defeat him, and it’s to be continued.  The Mighty Marvel Comics of the 60’s are really the reason we have most of the continued serial stories today, and if it weren’t for Lee with his overwriting and Kirby with his square jaws, comics wouldn’t be what they are today.  More info can be found HERE.

Thor died during Avengers Disassembled.  Then he came back to life when J. Michael Straczynski rebooted the title, since then he has appeared in the mega-crossover Siege, and Matt Fraction literally just started writing for Thor this week (which is a very good thing). 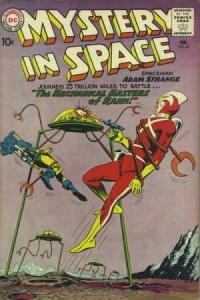 Most DC sci-fi from the 60’s follows a pattern.  Long story explanation from a side character, one “just crazy enough to work” idea that fixes everything, crisis averted in 8 pages or less.  This issue was no exception.  In fact, it happened three times.  Was the story pretty sweet?  I’ll say yes, I enjoyed a lot of the strange things they did to fill pages (explaining how a telescope works, throwing out some random history lessons, that kind of stuff).  However, I always get tired of the Twilight Zone twists they throw in.  It gets a little repetitive when whatever plan they have works out, until it was all a dream!  That’s not exactly what happens here, but I’m hoping you kids get the point.  DC sci-fi is a pretty crazy era, and these Mystery In Space issues  are no exception.  More info can be found HERE

Adam Strange pops up randomly in big DC crossovers.  Jim Starlin has been working with him a lot lately in the mini-series Strange Adventures and Mystery in Space (both 8 issues).  Other than that, ya kinda have to find it yourself.

And that’s it! Good job Dan.  Hey thanks!

One Response to Fresh Eyes on Old Books #6 by Dan!