The disadvantage of this being a once-a-year, $15 trade, instead of a series of smaller issues, is that it’s easy to miss — I didn’t see it at all Wednesday, and only knew about it because I read one or two online mentions of it. Fortunately, copies are still available, because no serious comics fan should have do without a Hernandez Bros. fix. Gilbert offers two connected stories: one of those Z-grade exploitation movies, like Speak of the Devil,  that he likes to play around with (this one involving a research team on a jungle planet of cat people, with all the sex and violence that you’d expect), and then an “outer” story involving Killer, one of Luba’s… grandchildren (it’s hard to keep that lineage straight), who’s starring in similar Z-movies herself.  Jaime offers a Maggie story in three parts: two on her sad-sack relation with Ray, wrapped around a flashback to her childhood. Kind of depressing, but, of course, very well drawn and constructed, with some twists and character bits that are presented like… well, like these guys have been doing high-quality work for 30 years. With 100 pages of story, on great paper, this is the best $15 you’ll ever spend on comics — until next years L&R, presumably. 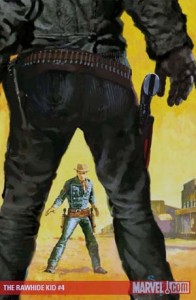 Zimmerman’s still too nudge-nudge-wink-wink with his scripting; the climactic seven-way battle here has no suspense, since we know nothing bad’s going to happen to any of the good guys. Still, he gives Chaykin lots of Western characters and costumes and guns and general mayhem to draw, and it’s such a smooth, pretty, glittering art package that it’s easy to forgive its other sins. Pop quiz: The fact that this is selling fewer than 8,000 copies an issue in the Direct Market (well under Hit-Monkey, for God’s sake) indicates that (a) comics fans need better taste, (b) comics fans are waiting for the trade,  (c) these issues will be highly collectible in 15 or 20 years, or (d) some combination of all of the above.

The second of a multi-parter involving Doc Ock wanting the baby of Menace, Harry Osborn’e goblin-y ex-girlfriend, and Spidey running with said newborn from an army of villains who are looking to score the bounty Ock’s placed on it. Waid knows how to set these things up (everyone in NYC is watching the chase live, being filmed on security cams and cell phones, and, of course, is convinced that Spidey is kidnapping the kid and is the bad guy), although it’s the kind of plot where you have to just roll with it, and not ask questions like “Why not just go to the freakin’ Avengers?”  Azaceta’s art continues to be an appealingly offbeat combination of superheroic and indy influences, and the fun everyone’s having with this arc helps to cover its minor sins.

Solid as ever — Brubaker plays the “take away the super-soldier serum’s effects” card this issue, with a few twists, and between the origin flashbacks, present-day action-adventure, and Eaglesham’s steady, solid art, this mini-series continues to be the kind of entertaining, well-constructed mainstream superhero book that makes us all want to keep buying the things.

Sort of a shorthand Marvel Handbook, as the conceit is that Steve Rogers is annotating entries on all the current heroes and groups. They’ve tweaked the power grid to reflect other qualities like “Conscience,” “altruism,” “determination,” etc. (presumably to reflect the “heroic age” emphasis, and with close to 400 entries for $3.99, this encyclopedia is a great deal for anyone needing a reference work to help keep track of everyone. 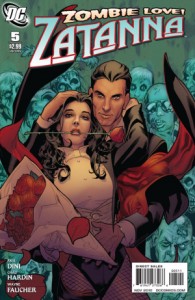 Dini’s scripts continue to be the attraction here. The plot twists are already getting kind of old (Zatanna’s like the Marvel family: the challenge is to shut her up, because if she can’t speak it’s hard to activate her powers), but it’s admittedly nice to see a smart, confident, powerful modern woman superhero — even if the fishnet stockings don’t hurt, either.

Two pencillers and two inkers make for inconsistent art (and some of it looks really rushed, which doesn’t help), but this is another book whose attraction is the writing: Simone knows her crew (especially the core of Barbara, Helena and Diana) inside and out, and has the gift of making readers care about what happens to them, too. This is the flip side to Simone’s much nastier, villain-centric Secret Six, with its examination of heroism a balance to that book’s more cynical worldview, and it tries hard to live up to its “Brightest Day” billing.

With 40 years of experience in comic reading, collecting and reviewing, English Professor Phil Mateer has an encyclopedic mind for comics. Feel free to ask Phil about storylines, characters, artists or for that matter, any comic book trivia. He will post your questions and answers on the AABC blog. His knowledge is unparalleled! He is also our warehouse manager, so if you are looking for that hard to find comic book, ask Phil!
View all posts by Phil →
This entry was posted in New Comics, Reviews and tagged Amazing Spider-man, Azaceta, Birds of Prey, Dale Eaglesham, Ed Brubaker, Gail Simone, Gilbert Hernandez, Heroic Age, Howard Chaykin, Jaime Hernandez, Love and Rockets, Mark Waid, Paul Dini, Rawhide Kid, Steve Rogers, Zatanna. Bookmark the permalink.