The Latest and (Mostly) Greatest #53 by Dan!

Oh man, bet you didn’t expect me to be back this soon, did you? Well here I am, so let’s do this! 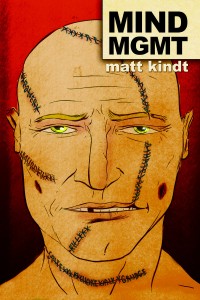 This books makes my brain explode. You start with the cover’s hidden words, you read the story inside both covers, that hints at the ideas of the coming issue; you read the issue using the foreshadowing blue lines along the side, then you read the part of the second story that explains a bit more that might come around. THEN you read the letters page that shows more and the fake back cover ad. This is the best comic on the stands right now and it’s only two issues in. Kindt is putting together a complex watercolor masterwork, and we’re lucky to even be seeing it. I’m excited for every issue of this that comes out, and can’t wait to see what’s next.

The Boys hasn’t gone anywhere near what I expected. It’s gone above and beyond everything I wanted and thought was worth it for the book. This issue has cemented the idea in my head that almost no one is going to make it out of this book alive. We still want Hughie and Annie to walk off into the sunset, but it’s going to take a bloodbath for us to get to that point. This issue gives you an infodump on what they think Butcher is doing for the first half of the book, then makes up for lack of action with an intense second half. This could very easily be one of the best issues of this series, and that’s really saying something. On the other hand with Ennis’ Marvel book, Fury is in the process of building a story around the S.H.I.E.L.D. commander in his early days of going off to Cuba to kill Castro. It’s two different Ennis stories building in different sections, and they’re both great, great stuff. 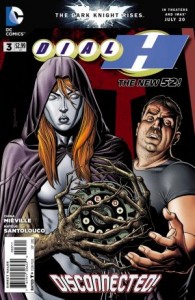 I think that Dial H has been one of my favorites of the second wave of New 52 books. The update of the 60’s/70’s property has been entertaining me for the past three months. The first two issues were pretty much a set-up putting the chubby schlub of a main character into a position where something needs to change. This issue… something changes. That lady on the cover isn’t just for show. She’s helping put things in place and move the story along. Santolouco is absolutely killing it on this book, messing with layouts and characters designs and it’s absolutely fantastic!

This is right in the middle in terms of quality for these Before Watchmen stories. Let’s just say it’s not as bad as Nite Owl, but I don’t think it quite hits the quality of the other books. Wein’s script is just another infodump about stuff we kinda already know. The origin of Ozy is expanded upon in graphic detail, as Lee draws the hell out of it. Jae Lee sometimes draws like crap (I’m looking at you Wolverine covers!), but this time he’s going off the wall in his layouts. It’s a fascinating book to look at and Lee’s art saves it from complete mediocrity. It’s not enough to be completely worth it, but hot damn… it it a pretty book! 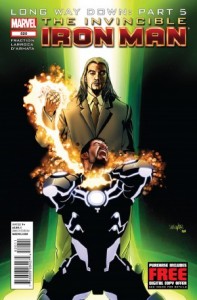 It sounds like Fraction’s time on this title is coming to an end, and that’s a shame. He has used every single Iron Man villain to their fullest extent, putting them together to throw Tony Stark through the gantlet. This issue sees Tony hitting rock bottom (it seems like every issue he gets lower), and the cover doesn’t even begin to exaggerate how bad things are getting. There’s a new Iron Man in town, Stark is being destroyed by Mandarin and everything is becoming worthless. Larroca draws the hell out of it, with his photo-referencing being one of the few that I will accept. It’s good stuff.

Hey guys! Do you remember that really terrible story written by Loeb and hideously drawn by Bianchi about the death of Sabretooth? You do? And you hated it? Well, here’s the sequel! And guess what? It’s still absolutely terrible! Things with Romulus from that mediocre Wolverine: Origins story are blended in with things that don’t make any sense. There’s grave-robbing, terrible layouts, and the introduction of characters that I can only assume are going to die by the end of the story. But hey… Sabretooth’s back. So there’s that. This is a comic that’s absolutely worth skipping and makes me sad to read Marvel books.

Avengers Vs. X-Men #7 Writer: Matt Fraction Artist: Olivier Coipel: I’m still just not sure why I should care about this, but the event has gone in directions that I didn’t expect, so that’s nice.

He-Man #1 Writer: James Robinson Artist: Philip Tan: Hmm, a solid writer with an OK plot, and the worst artist ever. I just can’t commit to it, cuz’ I really really don’t like Tan’s art.

Thief of Thieves #6 Writer: Nick Spencer Artist: Shawn Martinbrough: This is not a good comic…it doesn’t go anywhere! It’s just an excuse to make a TV show and have low print runs to upsell on ebay. No.

Sweet Tooth #35 Writer/Artist: Jeff Lemire: This is still the best Vertigo book on the market, and has made Lemire who he is today. It’s great stuff and has been for 35 straight issues. (Listen to Dan…he’s so correct…editor Alan)

Action Comics #11 Writer: Grant Morrison Artist: Rags Morales: Still worth reading, but I’m starting to wonder if Morrison has any real point in this run, or if he even cares. I’m willing to give it time, but not much more. 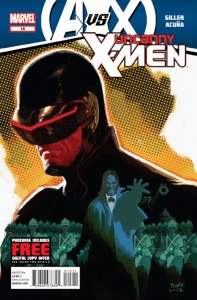 Uncanny X-Men #15 Writer: Kieron Gillen Artist: Daniel Acuna: Gillen keeps his plot going regardless of the crossover event, and the story actually has me interested in Mr. Sinister, so that’s quite the compliment.

Earth 2 #3 Writer: James Robinson Artist: Nicola Scott: I really like this book, even with it’s slow gathering of characters. Robinson is doing well and Scott does absolutely beautiful work.

And that’s the week! Phil will be back next week and then we’re back on a normal schedule. Whoo!