It Came From the Back Room #50 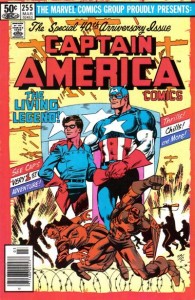 Standard recap: I’m slowly going through AABC’s one-million-plus back-issue room, restocking the boxes on the sales floor and pulling stuff to sell as discount/overstock/special items (these are featured at the discount racks at the west end of the store for a couple of weeks after each post, and then go to the discount racks on the east end of the store for a few weeks, and then disappear into our warehouses, so get them while you can). I’m going through the alphabet backwards (don’t ask), and at my speed (even now in the summer, when I’m not teaching), this amounts to a three-year project.  This week, we finally finish up the letter “C,” with Marvel’s Star-Spangled Avenger: 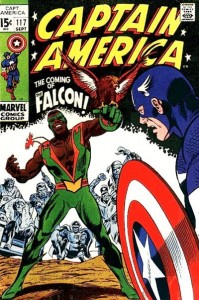 Cap was created by Joe Simon and Jack Kirby back in the early ’40s, and revived in early 1964 in the pages of Avengers #4; later that year, he began his own solo stories in the back pages of Tales of Suspense (the front of the book belonging to Iron Man), and then by issue #100 Tony Stark was spun off into his own comic, and Tales of Suspense became Captain America. Stan Lee and Jack Kirby produced the stories up through #109 (plus #112), while Lee and Gene Colan created most issues from there up through #137 — but, of course, none of those are out as discount books. The first that are available (if they haven’t been picked over already) are from the Steve Englehart 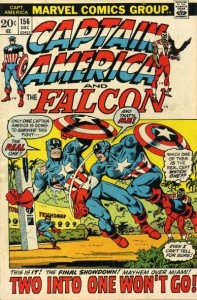 era, from #153-188, covering most of Cap’s early Bronze Age adventures. Probably the two most-remembered arcs from that period are at the beginning and the end — first, from #153-156, Englehart and artist Sal Buscema fill in a continuity gap, by explaining how Marvel was able to publish a few Cap adventures in the 1950s, if Steve Rogers was frozen in ice all that time. The answer is a “substitute Cap,” and Bucky, mentally unstable from the faulty super-soldier process used to give them powers (“Bucky” eventually becomes the hero Nomad, but that’s another story…). The later storyline, also by Buscema, starts around issue #170 and involves the Secret Empire, one of those shadowy conspiracy organizations that’s trying to take over the country; Cap fights it (with a then-rare guest appearance from the X-Men in issues #172-175), and at the end tracks its influence all the 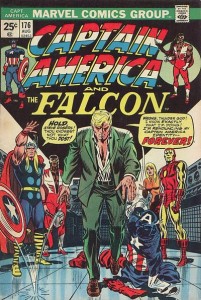 way to the White House. In a then-shocking plot twist, the leader of the conspiracy turns out to be… the President, Richard Nixon, who kills himself rather than be captured (the story never names him, only referring to someone of “high political office,” and his face is only shown in shadow, but the scene takes place in the Oval Office, and the implication is unmistakeable, especially since the comic’s publication, in early 1974, was at the height of the Watergate scandal). Steve Rogers is so shaken and disillusioned by this event that, in the next issue, #176, he renounces the uniform and name of Captain America — and doesn’t take up the uniform again until #183, an eternity for a plot development in that era.  Englehart leaves shortly after that, with issue #186, and 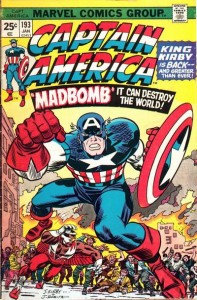 the next era for Cap involves the return of his co-creator: Jack Kirby, who supplies both art and script for issues #193-214. These weren’t considered particularly successful by fans at the time (they thought Kirby was too retro after the seemingly more-sophisticated Englehart stories), although they hold up very well today: rollicking, imaginative adventures, full of the patented Kirby energy –although the lack of a writing partner like Stan Lee hurts, since the actual scripting sometimes is the weakest link. Still, it’s a fun period, and nothing for the next few years comes close to it, as Captain America goes through a number of writers, none of whom leaves much of a mark, especially after Sal Buscema’s departure around issue #237.

Fortunately, the 1980s begin with a brief-but-memorable run, as Roger Stern and John 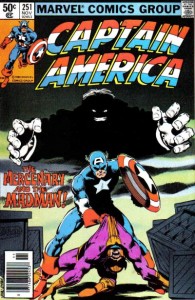 Byrne come on board as creators from Cap #s 247-255. Byrne’s talents are well-known, while Stern was one of the best writers at Marvel in the ’80s (his Spider-Man issues are deservedly praised), and here they team up to good effect: the should-Cap-run-for President issue, #250, is a high point, and is topped by the Mr. Hyde/Batroc super-villain team-up that follows it in #251 and 252, which is itself topped by the Invaders/Baron Blood story in #s 253 and 254, after which the run ends with a 40th-anniversary origin recap and celebration in #255: that’s only eight issues in all, but few other Cap chroniclers have been able to top it for solid storytelling and compressed pyrotechnics. There are a few long-lived collaborations, though — Mike Zeck draws Cap’s adventures from #263- 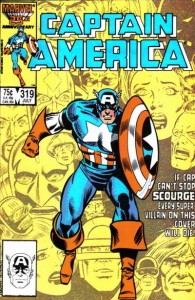 289, with J.M. DeMatteis as writer from #267-300, and while there’s nothing as wonderful as the Stern/Byrne stuff, it’s entertaining enough (more for the art than the story). A more significant development is the arrival, in issue #306, of writer Mark Gruenwald, who goes on to script almost every issue of the book from there on through #443: over ten years’ worth, and more than any other Cap writer. It’s a run that, although it’s never marked by any one startling or explosive moment (and, for that matter, almost never features a “name” or hot artist), maintains a consistently-high quality throughout. Gruenwald is an early practitioner of “writing for the trades,” the practice of providing five or six-issue stories that can then be collected into trade paperback form, and 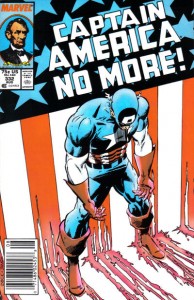 he’s also very good at adding the minor characters and soap-opera subplots that can keep a long serial title going; he’s also an expert at all the nooks and crannies of Marvel continuity: an early example is the Scourge story, mostly in issues #318-320, about a character whose goal in life is to assassinate as many super-villains as he can, letting Gruenwald bring in dozens of long-forgotten bad guys to kill off. Over his ten-year tenure, he’s able to wring a number of variations out of the typical Cap themes: there’s the “Cap resigns” bit, from issues #332-350, wherein Steve Rogers has to give up his costume to a more-compliant replacement, and eventually becomes just “The Captain”; another variation is the “Teen Cap” story (#355-357), where, to investigate a series of missing kids, Cap gets himself turned into an adolescent. Other examples are “Streets of Poison” (#s 372-377), 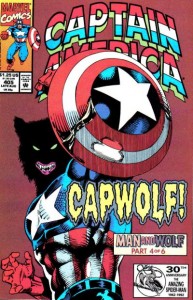 where Cap fights against a new drug that’s flooding the streets, accidentally gets it into his system, and needs a total blood transfusion to save himself — which removes the super-soldier chemical from his blood, and cancels out his powers; at the end of the story, he decides that, since that’s a drug just like what he’s been fighting, he should do without it and just use his own physical abilities (no, it doesn’t last, but it’s a neat extrapolation of Cap’s old-fashioned thinking, and the scenes of him using brains and his “normal” physical abilities against the bad guys are worked out well). Finally, there’s “Capwolf,” in issues #402-407, which involves werewolves, Cap becoming one, and pretty much every other animalistic character in Marvel continuity, including Werewolf By Night and 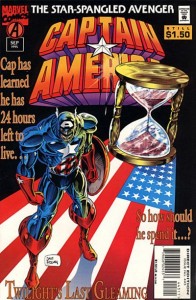 Wolverine. At the end of his run, Gruenwald offers a long series of stories (issues #425-443) where Cap’s body starts breaking down, and he has to deal with what his legacy should be, and how to face mortality while continuing to fight the good fight; this culminates in his seeming death, as good a way to hand over a character to a new writer after a long term as any. It’s also both spooky and poignant, given Gruenwald’s own death from an unsuspected congenital heart condition the following year, in 1996, at age 43.

It’s no fun following a long term on a continuing title like Cap, but sometimes the new guys hit a home run: so it was 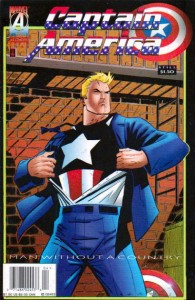 for Mark Waid and Ron Garney, whose arrival on Captain America with issue #444 was very well-received. Waid went old-school, bringing back the cosmic cube, the Red Skull and long-time Cap love interest Sharon Carter, but with enough twists that it didn’t seem like the same old thing; so, too, with the second arc, which involves Cap being framed and becoming a man without a country, trying to clear his name after being banished from the United States. Fans liked their style so much that, after 11 issues, when Marvel announced that Captain America was being cancelled and outsourced to other creators as part of the “Heroes Reborn” promotion (along with Fantastic Four, Iron Man and Avengers), it was the Cap change that stirred the biggest protest. To no avail, however, and volume one of the title ended with issue #454. 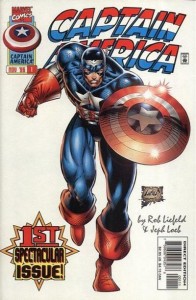 Cap volume two was not particularly a success, to put it charitably. Image co-founder Rob Liefeld handled art and plotting chores at first (with a scripting assist from Jeph Loeb), and although sales on the first few issues increased significantly, the book was widely criticized for what was perceived as sloppiness and distorted anatomy in the drawing, as it is by Peter David here. It didn’t help that Liefeld fell behind schedule, and so what had been projected as a 12-issue assignment was cancelled by Marvel after six issues, and reassigned to the Jim Lee team for the rest of the “Heroes Reborn” short run. If Marvel had had hopes that the “Reborn” experiment would lead to new, permanently revamped versions of the characters,

they proved unfounded, and after 13 issues Cap volume two was gone, replaced by the return of the “real” character to the Marvel universe with issue #1 of volume three.

Having failed to create any lasting buzz with the “Reborn” versions, Marvel went back to what had worked before with their volume three “Heroes Return” version: Waid and Garney, who are clearly happy to be back. Garney stays for the first five issues, and Andy Kubert pencils issues 7-12, 14-17 and 19-22; the earlier arc involves Hydra and, most notably, a Skrull conspiracy to take over Cap’s identity and infiltrate the Marvel earth (this is in 1998, ten years before “Secret Invasion”); later stories involve Cap’s shield being lost, the inevitable Red Skull return, and Klaw 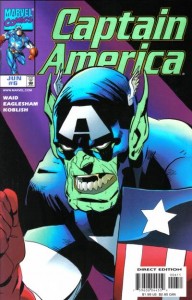 and Wakanda. Waid leaves with #23,  and Dan Jurgens takes over as writer with #25, still with Kubert on art; he stays through #31, and then Jurgens takes over both scripting and art chores from #33, and keeps them (with two or three exceptions) through the end of the run with issue #50. At that point, it’s 2002, and Marvel decides that in a post-9-11 world they need a different angle on the character. That’s all the room we have for now, though, and a good place to stop: tune in next time for Cap volumes four, five and six… oh, and I should point out that all the discount Cap comics are at the racks at the front of the story (the east, or Central Avenue, side); we debuted them there for our July 4 sale (what better time for a Cap display, eh?), and they’ll be up there for the next few weeks.

With 40 years of experience in comic reading, collecting and reviewing, English Professor Phil Mateer has an encyclopedic mind for comics. Feel free to ask Phil about storylines, characters, artists or for that matter, any comic book trivia. He will post your questions and answers on the AABC blog. His knowledge is unparalleled! He is also our warehouse manager, so if you are looking for that hard to find comic book, ask Phil!
View all posts by Phil →
This entry was posted in Comics History, Marvel, News & Promos and tagged Captain America, Jack Kirby, John Byrne, Mark Gruenwald, Mark Waid, Mike Zeck, Rob Liefeld, Roger Stern, Steve Englehart. Bookmark the permalink.