The Latest and Mostly Greatest #17 by Dan!

I’m writing these on a Friday, whoa! Stuff on time! Let’s do this! 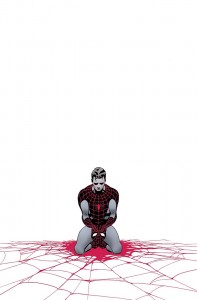 Yup, I’m on the bandwagon for this issue. It’s been going around the “internets” (as dear Dubya once said) that this is some big special fantastic issue, and holy crap it is.  Look, all you need to know is that Dan Slott really loves writing Spider-Man and Marcos Martin draws the hell out of it.  With the recent death of J. Jonah Jameson’s wife, this is a first half silent issue dealing with those ramifications.  The actual speaking of this issue happens in dream sequences that really show just how much death is really happening in Spidey’s life.  It’s slightly chaotic, but it’s supposed to be a dream sequence. This was probably one of the best Spidey issues ever written.  So that’s really all you need to know. 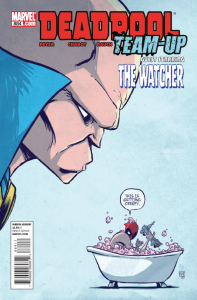 On the exact opposite spectrum of Spidey we get the Deadpool team-up with the Watcher.  The Watcher, of course, will not interfere, even when Deadpool is completely stuck in an elevator with him.  However, he will interfere when Deadpool tries to murder a puppy!  It turns out that this puppy is some kinda super-demon, which causes the Watcher to INTERFERE!  This leads to the most ridiculous dog tentacle/Watcher eye story you will ever see again.  Add to that the fact, that it makes fun of Marvel’s own obscure continuity and you get a seriously ridiculous comic.  Also, the assistant Watcher pops up from Strange Tales.  Ridiculous, great stuff. 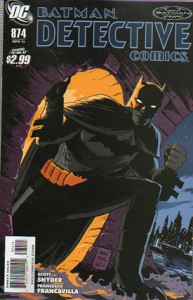 Scott Snyder knew how to use the back-up stories.  And now that they’re gone, he’s accommodated accordingly.  Francesco gets to shine in a full issue dedicated to his artwork, and he’s continuously proving that he’s going to be one of the best artists in the market any day now.  This is picking up loose ends of a story about Commissioner Gordon, and let’s be real here, if you can make Gordon interesting, you can do literally almost anything.  This team of Snyder/Francavilla might be better than Snyder/Jock, but for completely different reasons.  With Batman Inc. facing delays, Detective is back to being the top Bat book on the market. 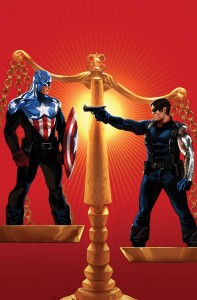 And with that, we wrap up on trial just to get to another.  Bucky saves the day, or does he?  This takes a page from 300, in that “proving that the God is actually a man” kinda way.  Brubaker continues what has been the best Cap run in a very long time, and even with the change in artists, it’s still good stuff.  Guice was ready to go this time around, and even with three inkers, the consistency isn’t as affected as it was last issue.  I’m worried that this is going to turn into a “trial of the Flash” situation (seriously, how many issues was that?!) but Brubaker is keeping the story fresh with some nice twists and turns along the way, so we’ll see. 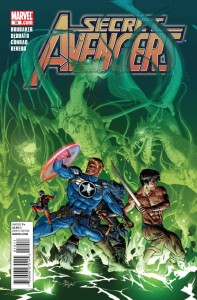 Remember when Deodato could barely get Thunderbolts out on time?  Well, now he’s dropping two books a month.  So… yeah.  This is the end of the storyline about Shang-Chi, and it really works.  If you know me, you know I hate non- 1980’s Frank Miller ninja stuff, but Brubaker has a very good handle on it.  He can’t legally use the word Fu Man Chu, so he’s been substituting “father” in there, but it’s kinda been working.  Apparently Brubaker is leaving this title in a couple of issues, which is really going to hurt it sales wise.  Look for those last issues to be crazy though, cause we’re getting some World War II flashbacks!

Punisher: In The Blood #4 Writer: Rick Remender Artist: Roland Boschi: I’m not sure what’s going to happen with the Punisher after this, but Remender has consistently put out such interesting stories.

Teen Titans #92 Writer: J.T. Krul Artist: Georges Jeanty: So Nicola Scott is already off this title?  The story is interesting, but the art change is disappointing.

Iron Man 2.0 Writer: Nick Spencer Artist: Barry Kitson, Kano & Carmine Di Giandomenico: Lots of talking; not much important.  A big let down on a War Machine title.  For how extreme the last one was, this is the exact opposite.  Find Middle Ground!

Fantastic Four #588 Writer: Jonathan Hickman Artist: Nick Dragotta: Oversized final issue.  Mostly silent, but does not hold up as well as Spidey.  I think if Epting had been on this like he normally is, it would have been better.  Overall good, but not too special.

Echo #28 Writer/Artist: Terry Moore: So much plot!  As we head to the end, Moore throws everything he can at us.  I can already tell this should have been stretched out like 5 more issues.

Avengers #10 Writer: Brian Michael Bendis Artist: John Romita Jr.: Still good, and has the entire first issue of the new Heroes for Hire in the back.  Neither fantastic nor awful, just consistent.

The Astonishing line is worse off then the Ultimate line, but that’s not saying much.  This issue had fallen spectacularly since the Joss Whedon days, and now it feels like “just another X book” which is way too bad.  The story itself is not bad, but when it’s come down so far, it’s hard to support this title in any way.

Oy.  Ultimate Spider-Man was almost on here again, but I just can’t handle it.  The stories here should be so much better, but they just don’t work.  They’re incomprehensible, mediocre, and not even fun to look at.  It’s rough, rough stuff.

And that’s it!  I’ll be back later in the weekend with the usual other reviews.  Whoo!