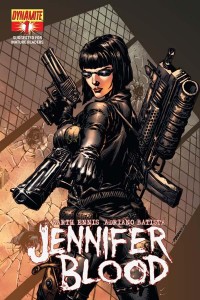 A suburban housewife is also the Punisher — that’s the premise of this mini-series, one that Ennis says, in an interview in the back, is meant to be less “bleak,” and lighter in tone, than a lot of his recent work. Of course, as an example of “lighter,” he mentions Hitman, which had a body count higher than most W.W.II movies — so, too, with this book, which features our heroine going to the docks at night (after spiking her husband’s and kids’ bedtime drinks with Valium) to blow away a bunch of Mafia goons. It actually is a lot of fun, and it’s nice to observe all the mayhem without having to worry about

her kids getting blown away later; only the bad guys get shot (or stabbed, or blown up) in this story, and for Ennis that’s what passes for restraint. Batista is good at handling both the gore and the everyday suburban stuff; she has an effective mixture of realism and caricature that’s reminiscent of another of Ennis’s partners, Darick Robertson. Overall, it’s an enjoyable bit of bloody escapism, and the book I liked best this week. 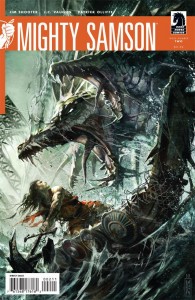 Two from Shooter’s Dark Horse-published revival of Gold Key (and, for Magnus, Valiant/Acclaim) characters; both offer 22 pages of story for $3.50, and the usual Shooter blend of well-thought-out future worlds (Magnus is a utopia with shadowy underpinnings, while Samson is a full-blown post-apocalyptic barbarians-in-NYC setting), heroic main characters, understandably-motivated villains, lots of action, and sexual relationships that would seem “adult” to a 14-year-old. If that sounds like I’m criticizing, I’m really not; this is smooth, hard-working entertainment, and delivers its stories very well; Shooter always manages to get the most out of his artists, and these are good-looking, intriguing comics. They also aren’t selling very well, so check them out early in their runs: if they do catch on, the initial low print runs will make them as sought-after as those early 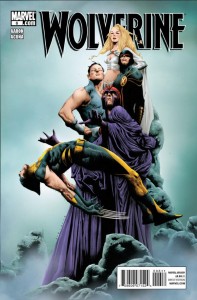 Valiants once were — and, if not, at least you’ll have some good comics to read.

The Canucklehead, having gone through a fallow period of mediocre stories, is currently being better-served by his creative teams: Wolverine, now the main title, just finished a Wolvie-goes-to-Hell tale that’s left him fighting demonic possession in his own head, while on the outside his 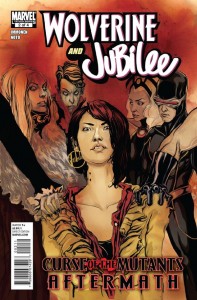 body is fighting the X-Men. Aaron knows how to bring the enthusiastic, over-the-top action, and between the X-Men, Namor, Damian Hellstorm, Mystique, and two Ghost Riders, there’s plenty of it here. Wolverine and Jubilee is a sequel to the X-Men vs. vampires story of a few months ago, as Logan tries to mentor his young friend through her adjustment to the bloodsucking life. In lesser hands, this would be maudlin or just dumb, but Immonen, whose Hellcat and Pixie mini-series were too-neglected Marvel bright spots over the last few years, is very good at smart characterization and careful plotting, and pulls it off easily; she’s helped considerably by Noto, whose drawings are a pleasure to look at — he can do more to show personality with just a couple of ink strokes than just about any other artist, and he and Immonen make a good 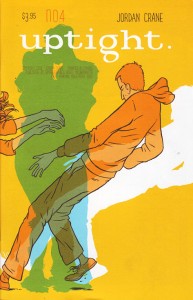 In the first of two serials featured here, Crane works the realistic-relationship corner of comics storytelling populated by creators like Adrian Tomine, where people are schlumpy and suspicious of one another, and hurt each other and don’t know why, but then cling to each other, too (and just in time for Valentine’s Day!); your take on this may be wry amusement or depression, depending on the state of your own relationships. The second story is a more cartoony and less grounded fantasy about a schoolgirl battling an evil principal (she’s like a non-psychic-powered 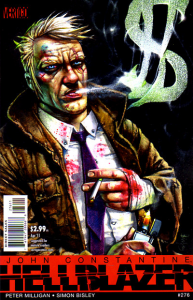 Matilda, for you Roald Dahl fans… although there is a talking cat, too), and while it’s sometimes a tad obvious, in a fey-British kind of way (the principal’s name is “Pernicious Codswollop”), it has a manic energy that would be out of place in the first story, and keeps Crane from getting shoehorned into just one style.

Constantine, now that he’s married, tries to put off finding a new apartment, which involves getting revenge on the high-frequency stock trader who’s trying to make a killing by buying up property and kicking Our Hero out of the 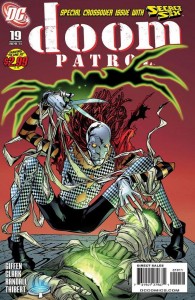 place where he’s living now. Milligan and Bisley, as always, craft a story that’s equal parts horrific, amoral, sly and sexy; a domesticated Constantine and wife promise to be a sort of satanic Blondie and Dagwood, a cool enough prospect to keep this book lively for years to come — until they do something stupid like kill her off….

The second part of a crossover with Secret Six that started last week in issue #30 of that title; considering that DP is being cancelled in a few issues, it won’t help them, but maybe a few of those readers will discover Gail Simone’s talents and migrate to Six instead. 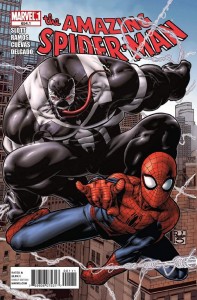 This .1 issue has almost no Spidey, focusing instead on introducing the new version of Venom: Flash Thompson, getting the alien suit as a (literal) black ops guy for the US military, which has ramifications both good (legs, at least as long as he’s bonded with the suit) and bad (the urge to bite the heads off of the bad guys he’s pursuing). Ramos’s art, as always, is fun to look at, and if you’re interested in the new Venom series beginning soon, this is the place to start. Oh, yeah, the Parker guy — they do throw in a two-page preview of the next year, and blurbs and covers for the next four issues, just so you don’t forget whose book this is supposed to be.

Stuff I bought, but don’t have anything knew to say about, so check previous reviews in the archives if you’re interested:

With 40 years of experience in comic reading, collecting and reviewing, English Professor Phil Mateer has an encyclopedic mind for comics. Feel free to ask Phil about storylines, characters, artists or for that matter, any comic book trivia. He will post your questions and answers on the AABC blog. His knowledge is unparalleled! He is also our warehouse manager, so if you are looking for that hard to find comic book, ask Phil!
View all posts by Phil →
This entry was posted in New Comics, Reviews and tagged Adriana Batista, Doom Patrol, Gail Simone, Garth Ennis, Hellblazer, Jason Aaron, Jennifer Blood, Jim Shooter, Jordan Crane, Jubilee, Kathryn Immonen, Magnus, Mighty Samson, Peter Milligan, Phil Noto, Secret Six, Simon Bisley, Spider-man, Uptight, Venom, Wolverine. Bookmark the permalink.