The Latest and (Mostly) Greatest #14 By Dan!

I’m going to be completely honest with you people.  I am exhausted.  Add to that the fact that this was an especially light week and you’re gunna get the internet’s quickest, yet still strangely, awesome-est (not a word, I know) reviews! Let’s Do This!

My Top Five (The 5 Best Comics of the Week) 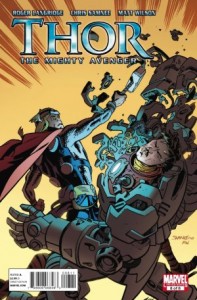 And with this, the best comic that none of you were actually reading comes to a close.  I don’t even know what to tell you guys.  This was probably one of the best books on the market, and one of the most interesting in a long time.  It was designed to be an ongoing (or at least 12 issues) and it just couldn’t hold up in this market.  It’s selling a lot more than some titles (I’m lookin’ at you anything from Vertigo…) but Marvel still gave it the axe.  There’s already one trade of this with a second on the way.  Support the good stuff; give it a try.  “Thor the Mighty Avenger”… you will be missed.  Hopefully both Langridge and Samnee, who have both put in some of their best work, continue to find work.  R.I.P. Thor, we hardly knew ye. 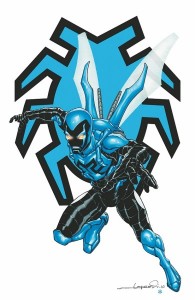 This isn’t the best issue of JL:GU, but it’s one of the most plot heavy.  Max Lord continues to do his crazy mind-schtick, and everything just gets worse for those crazy Justice Leaguers of yesteryear.  I was worried that when Giffen left the title (Why?  To focus on Booster Gold really?  Never made sense to me…) that Winick would go off his rocker into some of the things that screwed up his Green Arrow run, but so far no such bad turns.  Winick has been turning in some of his best superhero work to date, and to be completely honest, it’s actually interesting.  I keep wondering where this is going to end up, and that’s more than I can say for a lot of other titles right now. 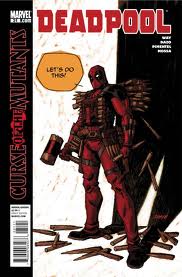 I stuck this one in the middle cause it’s the guilty pleasure of the week.  I’m not sure I even want to talk about how much I’m enjoying this book.  It’s almost like Way heard the X-men were doing a Vampire book, thought to himself, “that’s really stupid,” and made a story based on the idea that the X stuff was really dumb.  And it’s HILARIOUS.  A stupid joke as simple as calling every vampire a Dracula is the exact kinda humor that audiences for Deadpool comics need.  Dazo’s off-kilter style art kind of apes Humberto Ramos, but still has it’s own distinct style.  This book works because it doesn’t even remotely bother to take itself seriously.

On the other hand, this GL book relies heavily on it’s serious tone.  The main Green Lantern book still carries the main story, but it feels like a lot more is happening in this title.  I’m wondering how much focus Guy Gardner is going to get when this “War of the Green Lanterns” event kicks off.  They’re making it seem like he has some huge role to play, so who knows how important these issues may be?  In the meantime we still have plenty of material going on here.  Guy pisses everyone off except the Red Lantern on the cover.  He finally meets up with the big bad guy, who also throws his own little mind control twist.  It’s a really good book that continues to improve and add to the future story. 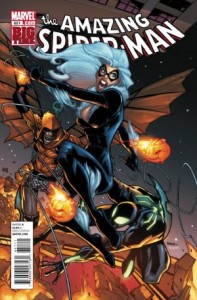 In a very light week, it’s important to recognize overall quality.  This latest issue of Spider-man is right in line with all the good stuff we’ve had before (One Moment In Time not included).  Ramos is usually not my style, but his frantic strange angles really work for a Spider-Man story.  It feels like all the changes in lines put you right there with Peter Parker and the action.  Slott’s as much of a fanboy as he claims to be.  He knows the mythos, he understand the style, and he works his story to really respect everything that’s come before.  It’s clear that this team knows what they’re doing.  There’s also a preview for the next arc that makes me wonder about the art.  But I’ve been proven wrong before…

Casanova: Gula #1 Writer: Matt Fraction Artist: Fabio Moon: Continuing the reprints; still a very awesome story that’s fun to read.  Get it while you can!

Black Panther: The Man Without Fear #514 Writer: David Liss Artist: Francesco Francavilla: Still good, worth checking out.  Much better than I thought it would be, and Francavilla is a really, really great artist.

Batman Beyond #1 Writer: Adam Beechen Artist: Ryan Benjamin: The new ongoing series… because you demanded it!  But seriously, it’s really good and a pretty faithful adaptation.  Worth checking out.

Booster Gold #40 Writer: Giffen & DeMatteis Artist: Olliffe & Perrotta: Worth noting cause it was the perfect jumping on point.  Has a full explanation of the character before moving on.

Doc Savage #10 Writer: Ivan Brandon Artist: Phil Winslade: This is the first issue of Doc Savage where I’ve actually been able to read through the whole thing.  That’s the best compliment I can give it.

Secret Six #29 Writer: Gail Simone Artist: Marcos Marz: The end of the story starting in Action Comics and it’s… Ok.  Just ok, which is disappointing for what has been an otherwise stellar series.

T.H.U.N.D.E.R. Agents #3 Writer: Nick Spencer Artists: Chaykin and Cafu: Hey! A Chaykin cameo.  This was a really interesting issue, but I wish I knew more about the Agents and why I should care.

So remember that time that a big anniversary issue came out with like 14 covers?  Must have been from Image.  This issue is a freaking mess.  The culmination of all the work McFarlane has done on the title leads to this convoluted mess.  Fight scenes or speeches, none of it works.  It’s just bad.  So. So. Bad

When you start with an ugly Cassaday cover (rare), you know you’re in trouble.  I don’t blame Roberson, but the story in this is just awful.  I’m hoping it’s all some big plot point that will be fixed soon.  But for now it just seems like no one understands how this character works.  And it’s leading to god-awful storytelling.

And that’s it!  Don’t bother me, I have some Jersey Shore to watch.

2 Responses to The Latest and (Mostly) Greatest #14 By Dan!