The Latest and (Mostly) Greatest #12 by Dan!

All right folks, it’s a Saturday morning, so you know what that means!  Review time! 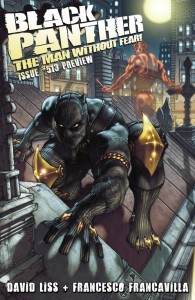 This book was surprisingly awesome.  As was the case with Spider-man during “One More Day”, maybe Shadowland will lead to something much more fun.  Black Panther shows up fresh of his last failed series (has that been six?) to be a street level fighter on a quest for personal redemption.  He’s abandoned his family and kingdom to try to reconnect with the actual world, and that involves fighting Russians! What’s not to like?  Francavilla is a very different artist; it’s much more cartoony and strangely colored, but it’s right up my alley.  I can guarantee that this won’t be for everyone, but if you can just stop and take a look, you’ll realize that this is a pretty solid first issue of a completely new direction. 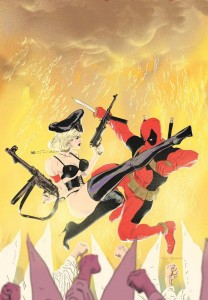 I’m such a sucker for Baron Zemo!  If you want me to talk about your comic, just make sure to throw that pink-fleece wearing Nazi right into your cover and I’m sold!  Then shoot him point blank in the face in the actual comic and I’m double sold!  That cover is a bit misleading, as the fight with that Nazi lady only involves a knife straight through her face… (did I mention this wasn’t an all-ages read?)  Overall, this series has just been a series where Baker and Lapham do whatever the hell they feel like doing, and it’s leading to some of the most interesting stuff since the first ongoing series of Deadpool.  Good stuff. 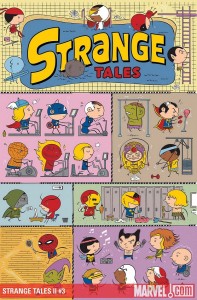 I’m such a sucker for this whole concept.  It starts with a Terry Moore Thor story that’s really freaking sweet.  Then dives in a Silver Surfer story by James Stokoe that actually made me go “holy S#!&” when I looked at that first page.  It’s a series of strange stories (USAgent?… Really?) by creators that you may never have heard of, and it’s just way too good.  I always wonder why it’s the 5 dollar price point, but I try not to think about it.  This also has some of the last published work of Harvey Pekar, where he meets up with Be Grimm.  Pekar never really worked for me, but if that’s the kind of story you’re interested in, it’s right here for ya. 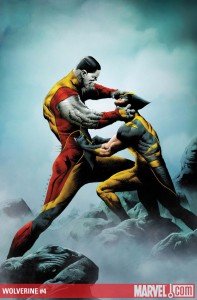 More of the same quality I’ve come to expect from this title.  Aaron was originally tearing it up on Weapon X, and he has transferred that ability right to this title.  Being the fourth issue of a 5 part arc makes this the “fight” issue, but so much still manages to happen.  Why do I feel like they’re going to make Puck the leader of Hell after this?  And why do I think that’s such an awesome idea?  I’m left wondering how everything is going to wrap itself up, which is exactly what a writer wants from his story.  This has been a very successful turn on the “(character) goes to hell” story, and I’m glad to see that an artist like Guedes is still getting work after his gig on Superman.  I expect big things from that guy.

Kind of a filler issue, but still pretty freaking sweet.  It’s the entire origin of the Ghost character and it actually makes perfect sense in a “who I am and how I came to be” kinda way.  The Thunderbolts really change in quality based on who is working on them and even on a story-by-story basis.  Parker started off a little weak, but since then he has really become much better.  This entire origin issue had me wondering just how this character was going to get screwed over, and how it was going to all go down.  It was heartbreaking and epic at the same time, with the obvious mass murder you would expect from a… mass murderer.  I’m a little nervous about the end, cause I haven’t trusted that character since Exiles, but we’ll see…

Stuff Worth Noting (Not the Best, but You Should Still Know It Came Out)

Avengers Academy Writer: Christos Gage Artist: Mike McKone: The cover disagrees with the inside on who is doing art.  Still a fun solid series that’s definitely worth checking out.

Green Lantern #60 Writer: Geoff Johns Artist: Doug Mahnke: Mahnke still draws the hell out it, but I’m wondering if we’re just treading water.  The God collector is an interesting angle with a lot of potential

Batman #705 Writer/Artist: Tony Daniel: Kinda of a dumb reveal at the end, but Batman rides a horse! That’s all you really need to know.

Darkwing Duck #7 Writer: Ian Brill Artist: James Silvani: Still freaking sweet, and don’t you forget it.  Links to “Ducktales” and alternate realities are making this a perfect book for us 90’s suckers.

Green Lantern Emerald Warriors #5 Writer: Peter Tomasi Artist: Fernando Pasarin: I’m still excited by this whole series.  It’s a very interesting take on the set of characters, and it appears to have a consistent direction.  Watch this book. it could be getting really great.

Chaos War #3 Writers: Greg Pak and Fred Van Lente Artist: Khoi Pham: This is a mini-event that has been pretty good.  Kind of a rip off of Blackest Night though…

I don’t wish the task of following Morrison after this title on anyone, but seriously, this is rough.  Cornell is probably writing a capable story, but McDaniel is not a very good artist, and this whole “surviving after being shot point blank in the face” just is not working for me.  I wonder how long this title will actually continue on for.  Sigh.

This storyline is just stupid.  I feel bad for Wilson having to do the fill-ins while they set up the next artist to finish JMS’s mediocrity.  Stracinzyski’s quitting on this title is probably causing chaos in the DC offices, and this is probably affecting the stories we have now.  This whole “Grounded” storyline was supposed to only last a year, and however long it does go, it’s going to feel like way more than a year to me.

And That’s It!  More tomorrow folks.