I’m taking a break from watching whatever the Cardinals are trying to do.  It sure isn’t playing football, but that’s the kind commentary I should save for a different blog.  Now, Comics! 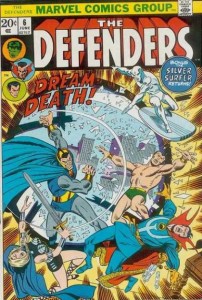 The Defenders are a team that has always surprised me.  They look like a poor-man’s Avengers team, consisting of throwaways that aren’t good enough for the main team.  But this title lasted over 150 issues, so do I really have any room to judge them?  It is a completely capable creative team in Steve Englehart and Sal Buscema.  It’s the kind of group that you know will produce consistent results month in and month out, and this issue is no exception.  This issue is much more of a “The Defenders fight a Dr. Strange villain” type of story, and I wonder if it could have worked just as well in the regular Dr. Strange title.  There also wasn’t any Hulk in the issue at all, which is strange with him being on the cover and all… More info can be found HERE

The Defenders, as I already said, were around for over 150 issues.  The main characters (Hulk, Dr. Strange, Silver Surfer, and Namor) all still pop up all over the Marvel Universe, and every once in a while, there will be a new mini-series using the Defenders name. 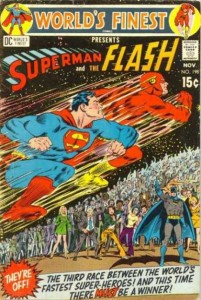 All right, I’ll admit it, this comic tricked me.  I was way excited to see how it ended, and then it pulled the rug out from under me with a “To Be Continued”.  Not cool guys, not cool.  I’m not sure how the other Superman Flash races work, but I can assume no one ever really wins.  The cover is also misleading, because the race itself is brought on by the Guardians of Oa (with no Green Lantern in sight…) and there is no crowd watching as it happens.  Batman does show up to count them off, but that’s for Absolutely NO reason.  There’s a side plot with Jimmy Olsen being sucked into Roman times and unable to speak their Latin.  It all ends with Jimmy ready to be shot in the face with some arrows and then… Well I don’t even know, you’ll just have to find out for yourself.  More info can be found HERE

World’s Finest went on for over 250 issues, with lots of different guest stars.  At it’s core it was always about the pairing of Superman and Batman, and the ridiculous Silver Age Shenanigans they got into.  If you’re looking for it’s current equivalent, I’d probably say the Batman/Superman title is your best bet.

That’s right folks, I found a way to link my family-obsession with Disneyland to the comic blog I write…wanna make something of it?  I expected this to be really stupid, but it wasn’t that bad! (ringing endorsement…)  This was an ad-free comic with about 8 different stories of Disney characters tying into different Disneyland rides.  It was a really well put together set of stories that’s the perfect kind of all-ages book that still holds up today.  It was a completely light-hearted and fun book that clearly shows where the current kids comics we have out on the stands take their inspiration.  It’s the kind of book that won’t get you in any trouble for owning, and sometimes that’s the best thing you can say.  More info can be found HERE

If you want any Dell books about anything, just ask us, cause I’m sure we’ll have something.  If you’re looking for current Disney titles, Mickey Mouse, Donald Duck, and Uncle Scrooge all still have their titles.  There’s also more 90’s shows such as Darkwing Duck and Chip n Dale that can be picked up right here at All About Books and Comics.  Just Ask!

That’s it folks!  I’m not sure I wanna go back to this Cardinals game, maybe I should have reviewed more comics… Happy Holidays!