The Latest and (Mostly) Greatest #11 By Dan!

This was a shortened week, so forgive me for this rush.  Just means I’ll be cramming in sarcasm by the boatload! 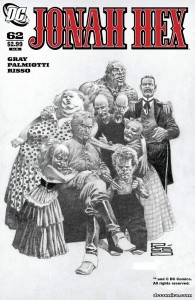 This issue was so very pretty.  Risso has his distinct style that just worked perfectly for this issue.  It’s amazing to me that it’s taken 62 issues for him to get involved in the Hex mythos.  Hell, it’s amazing that this title has lasted 62 issues.  But it’s been all about the writing team.  Gray and Palmiotti have been shockingly consistent with their Jonah Hex.  I don’t even know what to say about this one;  it’s been one of the best western comics in the market since I started working at AABC, and hopefully its quality will stand the test of time and will work for future generations (How epic of me…) 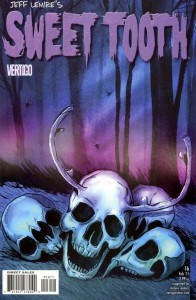 Oh, I just never get tired of Sweet Tooth, and unlike so many other Vertigo books, it keeps coming out without getting canceled!  So that’s nice.  I fully expect to see an announcement of this ending, and every time it doesn’t, that gives me a little hope left in the comic world.  It’s consistently the best comic Vertigo has put out in quite some time, while Lemire gets more and more famous is a testament to his abilities.  Also, it never stops being interesting.  It’s a fairly quick read, but it’s always worth your time.  The first trade is six issues for 10 dollars! Who can complain about quality like that? 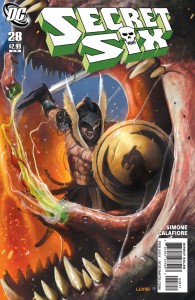 Speaking of consistency, we have Simone still carrying the Suicide Squad torch on to Secret Six.  The villains had taken over the weird Warlord-style jungle they were fighting in. Everything comes to a head…with giant dragons too!  There’s nothing really worth complaining about in this issue; it’s just as great as all the others.  What’s best about it is that the plot actually advances.  You know how sometimes it feels like Batman is just gunna be Batman forever?  Well, that’s not the case in Secret Six. Things can change, people can die, and it’s always going to be a pretty sweet ride.  It’s a wonderfully consistent and fun book that I look forward to reading each month. 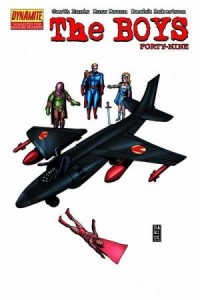 This was a fairly normal issue of the Boys.  It was doing nothing to really draw my attention.  The Homelander was developing as a character and that was interesting.  Butcher was doing his usual shady dealings, and that was fine.  But then the flashbacks started interrupting the actual story, and that’s when things got real.  The last pages of the story kinda completely blew my mind.  Ya know something bad is gunna happen, and you know that one of them isn’t gunna be able to stop it, but I can honestly say I didn’t expect it to be the way it was.  Stupid lamplighter is always screwing everything up, isn’t he?  But that’s all part of the Ennis plan, and it’s still an amazing ride. 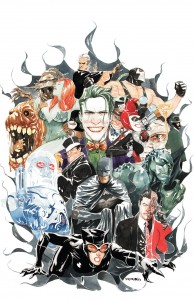 I usually hate anthology style comics like this.  But for some reason, I found myself completely interested in every story in this book.  You start with the ridiculous collage cover by Dustin Nguyen and it just goes into a series of villain stories.  That Joker story was stupidly fascinating. The Riddler story was a heist with a Catwoman story that made me laugh. The Calendar Man story was all right… the Killer Croc story was pretty sweet and so on and so forth.  This was the most interesting anthology story I’ve read in a while, but it doesn’t change my opinion of anthologies overall.  Fun stuff nonetheless!

Stuff Worth Noting (Not the Best, But you Should Still Know It Came Out)

Wolverine: The Best There Is #1 Writer: Charlie Huston Artist: Juan Jose Ryp: I’m a sucker for Ryp art, and the story itself is fine.  As violent as it claims to be, but nothing that really freaked me out.

Irredeemable #20 Writer: Mark Waid Artist: Peter Krause: Still an interesting story, but I’m wondering how long it can carry on.  Does Waid actually have an end point? We’ll find out some day.

Heroes for Hire #1 Writers: Dan Abnett and Andy Lanning Artist: Brad Walker: Walker cannot draw Misty Knight, and Abnett and Lanning throw out a “WTF moment” at the end that I’m not sure I’m that interested in.  Check back next month.

Action Comics Annual #13 Writer: Paul Cornell Artist: Marco Rudy: Finally a Cornell story I enjoy!  It’s fun stuff about Lex Luthor’s upbringing and why he is the way he is.  Shockingly good.

Rasl #9 Writer/Artist: Jeff Smith: Just. So. Much. Exposition.  But I keep trusting Smith to have a plan.  We’ll see in year fifteen after 30 issues have come out…

The Weak of the Week (Definitely not the best, If you know what I mean…)

I feel like because Berganza has been editing so long, he knows all the cliches he could possibly run into in a Batman story.  In this issue, he manages to hit them all.  There’s story points used in Gotham Central, Frank Miller Batman, and just a generic Scarecrow idea that comes from nowhere.  It doesn’t help that Barberi has an anime style that makes me want to punch myself in the face (personal problem, you might enjoy it).  This was very rough, and fairly disappointing.

And that’s it!  I will have more later, but this Saturday night we have the electric light parade!  Come watch, buy stuff, and try not to freeze!