It’s a Sunday afternoon, so we all know what that means!  Old-timey comics! 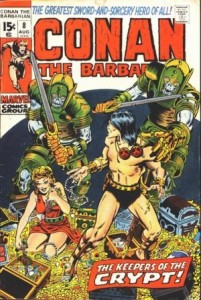 Oh the Bronze Age… A little less lighthearted than the Silver Age, and nowhere near as gritty as the present.  So we get titles like Conan.  You might remember the Schwarzenneger movie of the same name, but surprise(!)… there was a comic first.  This issue of Conan is exactly what you’d expect it to be, a quest for treasure, an enemy that becomes a friend, and Conan having to run away from someone trying to capture him.  Once you add in a whole section where Conan fights a dragon by first chucking a boulder at him and then deciding it is time to use his sword, that’s how we know we’re in for a treat.  Interesting stuff.  More info can be found HERE.

Conan the Barbarian was a Marvel series for a LONG time (just look at our back issue boxes).  The current incarnation is from Dark Horse, and just ended at issue 25, but should start up again soon. 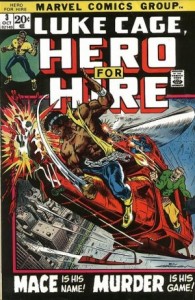 So the 70’s also had their fair share of crazy stuff.  This is a key example of one of those situations.  The tiara wearing bullet proof Luke Cage decides to fight some uppity war veterans.  In the process he takes down a helicopter, and several people die.  But probably the most hilarious part of it all was General Mace who does not have his right arm, and instead has, you guessed it, a mace.  When bludgeoning Cage with it, Cage resists, so Mace shoots mace out of his mace.  You people understand how that is the greatest sentence I’ve ever written right?  I’m looking for more ways to use the word mace, but I’m stuck.  The cover says Mace is his name! Murder is his game.  Winner.  More info can be found HERE

Luke Cage is now a huge part of the New Avengers.  He got big in modern times during the Alias series, and he had his own mini-series a while back.  If you just want a straight up Luke story, then the Azarrello-Corben book CAGE could also work for ya. 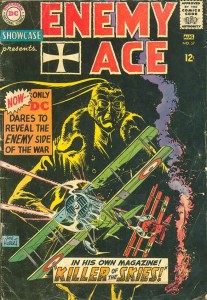 There’s something about the simplicity of a Joe Kubert book that I will always enjoy.  He is the master of war-type art, and it’s because he makes it seem so natural.  This is the kind of book where you can look only at the pictures and still get a complete understanding of what’s going on.  It’s all about the action, but also all about the content.  Enemy Ace has to take on the Canadian “Hunter” in a battle to the death.  There’s a series of tests by both of them, but we all know how this is going to end.  Kubert just draws the hell out of it… extremely intriguing air fights.  Gotta love the fact that Canada has some amazing air fighter; clearly this is a work of fiction… (sick burn!)  More info can be found HERE

And that’s it!  Hope you enjoyed, and we’ll see you again in two weeks!