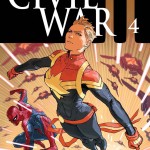 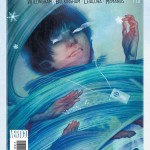 Fables #110 — Writer: Bill Willingham;  Pencils: Mark Buckingham; Inks: Steve Leialoha and Shawn McManus This is just a normal issue of this book, by the normal creators — but it’s a good example of its charms: the monkey Bufkin and his allies are in the Land of Oz, fermenting revolution against the evil emperor Roquat, while in the land of the now-dead North Wind Bigby, Snow White and their children are facing down the other winds, and trying to decide which of the kids will take over as the new replacement avatar; meanwhile, in Mr. Dark’s old palace, the … Continue reading →