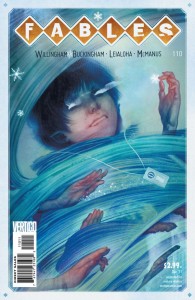 This is just a normal issue of this book, by the normal creators — but it’s a good example of its charms: the monkey Bufkin and his allies are in the Land of Oz, fermenting revolution against the evil emperor Roquat, while in the land of the now-dead North Wind Bigby, Snow White and their children are facing down the other winds, and trying to decide which of the kids will take over as the new replacement avatar; meanwhile, in Mr. Dark’s old palace, the former Mrs. Spratt continues her training to become the destroyer of all the Fables, in revenge for their defeating her mentor. All of this is interweaved smoothly and skillfully, with clear and sometimes beautiful art —  and then there’s the last page…. Willingham and DC shopped this concept around to the TV networks a year or two ago, and they all passed — but now, this season, two of them have new shows about fairy-tale characters in the modern world. That’s a good example of (a) what an interesting and bountiful storytelling idea this concept is, and (b) how network 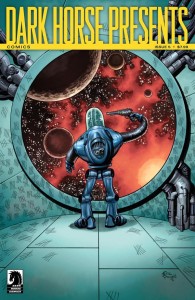 executives are thieving scum, as unethical as any fairy-tale villains.

There’s no Beasts of Burden story this time, more’s the pity, but there are chapters of serials by Carla Speed McNeil, Howard Chaykin, Steve Niles and Neal Adams, plus stand-alone stories by Eric Powell and Andi Watson (with his Skeleton Key characters), plus four other stories. It’s still the best anthology book out there, still $8, and still completely worth it (especially compared to those Marvel books with 22 pages of story for $4).

The Iron Man and Journey into Mystery are both Fear Itself tie-ins, so they should be read before the end of 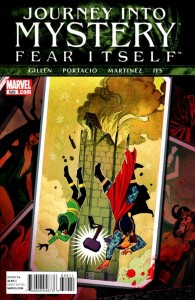 that mini-series; both are among the best regular-continuity Marvel books on the stands right now. Fraction has Tony Stark backsliding on his alcoholism, while struggling with a crew of armor-construction dwarves in Asgard; Fraction is a recovering addict himself, and those parts of the story are both realistic and poignant, while there’s plenty of humor (the dwarves swear in Norse runes, and now Tony has picked it up; I hope it continues once he’s back on Earth) and heroism. JIM features the now-early-teen Loki, which sounds stupid but turns out to be a smart move; he isn’t evil, but he’s still supremely devious, and his struggles to 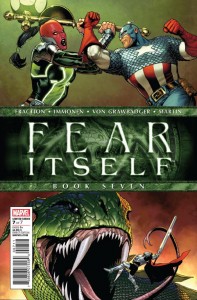 help Asgard are complicated, fun and, in the end, as self-sacrificing as any of the other heroes. That leaves Fear Itself itself: it’s 40 pages of very-good-looking battle and aftermath scenes (plus 16 more pages of promos for the four new books spinning out of it), and more than worth the $5 cover price, but still comes off a trifle flat: the one major character death has zero impact, since it’s a character who’s died before, and has his own comic, and has a movie franchise; when even the youngest and newest readers know that he has to come back, how much emotional resonance can there be?

Very quick DC 52 reviews this week, folks: as always, the big question is: is the title still worth reading, or not? 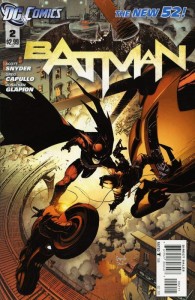 Bruce Wayne gets thrown out a window, and a new shadowy organization, the Court of Owls, makes its presence felt. Yes, it’s still worth picking up: Snyder uses the cast and props of Gothan well, and all those years of drawing Spawn and his cape continue to prove great training for Capullo here. 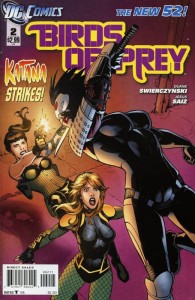 Still in getting-the-band-together mode; Canary and Sparrow recruit Katanna, and there’s an appearance by the fourth recruit on the last page. I liked Gail Simone’s version of this title, and am not happy that it’s all been retconned away; the Saiz art is idiosynchratic enough to be interesting, and he can draw women, but the story isn’t very compelling so far. Let’s call it neutral.

This is another title whose last incarnation I liked, so the retcon here doesn’t sit well either; on the other hand, Bedard does a good job emphasizing what made Jaime an appealing character in the original, and the whole “learning the powers” bit is always fun, especially with an alien scarab (part of a planet-conquering race) acting like Alfred the butler to a naive teenager. Mark this as a mild “keep buying.” 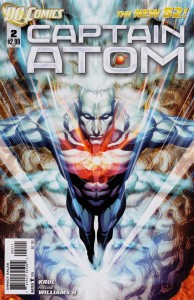 The glowing-blue-guy-with-red-energy still makes for a pretty color palette, but the story is either a rehash of similar Dr. Solar/Manhattan origin bits, or just stupid (entering the brain of a kid with cancer to kill his tumor? Really?), and despite all the flashy lights, just isn’t that interesting. Sorry, guys: no third issue from me for this book. 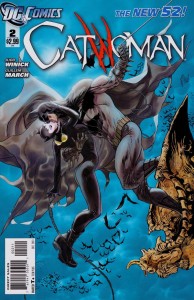 Any book that starts with Batman and Catwoman basking in the afterglow of costumed sex is, at least, not boring, and the art has three or four good splash pages (although March seems to pour all of his effort into those at the expense of some of the lesser panels). On the other hand, parts of the story are stupid (Selina’s been having sex with Batman but, when she meets Bruce Wayne, even up close, has no glimmer of recognition, even though he’s presumably he’s got the same build, facial structure, voice and scent? He can’t change all of that, right? And she’s supposed to be observant?), and Winick’s attempts to 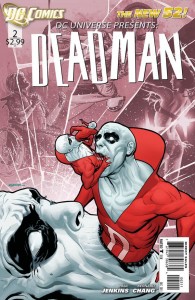 shock the reader come off as manipulative. It’s intriguing in spite of all that, though; put it down as another mild “keep buying.”

Deadman’s attempts to break into a supernatural club, past all of its occult security measures, are kind of fun, but the resolution — there’s this library with a book that tells his whole story, and its absolutely forbidden for anyone to read their own future, but when he mildly threatens the librarian she just caves in and reads it to him anyway — is just conveniently dumb, and there’s

nothing here to make me care about what he finds. No buy.

Someone’s killing Green Lanterns, and entire alien worlds, as part of some revenge/terraforming plan, and Our Heroes are in the middle of it. It’s one of those story structures where it takes everything they have to defeat ten of the bad guys, but then at the end they have to face a couple of hundred more, so they’re right back where they started, but even worse, and the comic didn’t really move 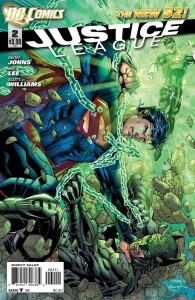 the story ahead at all. Don’t care.

Green Lantern and Batman fight Superman, and the Flash shows up, and there are Mother boxes and parademons, and a pre-cyborg Vic Stone deals with his clueless father and gets blown up real good. It feels like more story than the first issue, but still more like 1/6 of a graphic novel than a satisfying comic, and the extra $1 cover price still feels like a cheat (you get, like two more pages of story, and a bunch of sketch/notebook pages: yippee); on the 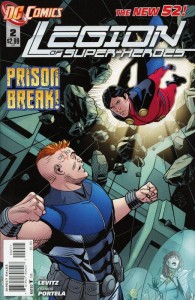 other hand, it’s fun and has the normal fan-friendly Johns beats, and the art is real pretty. Definitely keep buying.

Same old Levitz Legion story, with just average art, and no attempt to make the book accessible to new readers. You know, I think I’m finally burnt out on these guys; Jim Shooter was the last writer who made the LSH interesting, and editorial incompetence ran him off a couple of years ago. Feh. 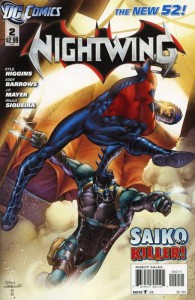 The art’s nice throughout (there’s a splash in a circus warehouse that’s a good example of Barrows’s skills at detail and mood), but the villain’s just a generic hardass in a costume, and I really don’t care about Nightwing and his little family circus, and despite some decent effort the creative team doesn’t give me any reason too. A mild “no” for me, but check out the art to see if YMMV. 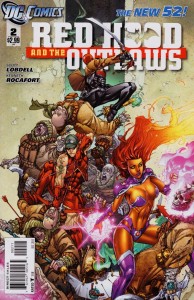 Um… no. For one thing, the continuity (Jason was Robin? And still died? And inexplicably came back? And now he’s grown up? Even though DC’s been saying that Batman’s only been around for five years in their new “universe”?) makes my head explode, and for another, I just find Lobdell generic and irritating, in both his plotting and his characterization. Go away, guys. 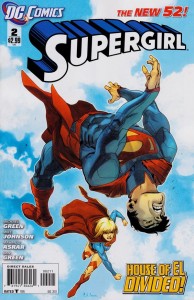 A big fight/misunderstanding between the newly-arrived, confused Kara and her cousin Superman takes up the whole issue; it’s one of those comics where nothing actually happens and it takes about two minutes to read — both art and story are average, and offer no incentive to ever pick up this book again. 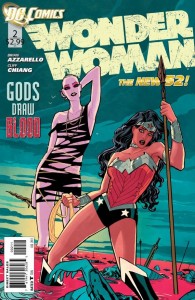 Chiang’s art is still hit-or-miss with me, but the good panels outweigh the clunky ones, and the story’s intriguing, with a last-page revelation that makes sense and changes up WW’s origin in a way that’s both startling and makes perfect sense. I’ll be back for issue #3.

With 40 years of experience in comic reading, collecting and reviewing, English Professor Phil Mateer has an encyclopedic mind for comics. Feel free to ask Phil about storylines, characters, artists or for that matter, any comic book trivia. He will post your questions and answers on the AABC blog. His knowledge is unparalleled! He is also our warehouse manager, so if you are looking for that hard to find comic book, ask Phil!
View all posts by Phil →
This entry was posted in New Comics, Reviews and tagged Batman, Birds of Prey, Blue Beetle, Captain Atom, Catwoman, Dark Horse Presents, Deadman, Fables, Fear Itself, Green Lantern Corps, Iron Man, Journey into Mystery, Justice League, Legion of Super-Heroes, Nightwing, Red Hood and the Outlaws, Supergirl, Wonder Woman. Bookmark the permalink.