Stuff That Was Awesome #2

So even with a light week, there’s still plenty of stuff worth reading, and I’m here to tell you what it is! 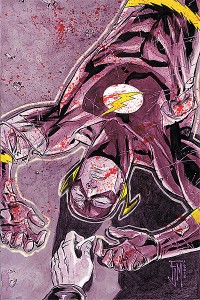 Oh man.  This Flash series has been some of the best stuff that I’ve read lately.  Very interesting ideas, new characters, and plenty of potential.  I’m not a very big fan of Manapul, but he is really cranking out his best material on this book.  Johns writes it as well as he can, and it’s clear he really enjoys it.  Even Eddie liked this, so I must be right!

A Brubaker two-fer, and as always, he delivers.  Solid artwork behind him doesn’t even remotely hurt.  First up is the Avengers title, and Bru isn’t always his strongest with team books.  However, he’s been using the little character moments to really build up a strange story, and Deodato draws the hell out of it.  On the other hand, Cap is always good no matter who draws it.  It’s weird that Guice is only on inks right now, since he was supposed to be a regular artist, but on Brubaker books I will rarely complain about anything.  They’re that good.

Oh man, Lobo is a stupid character.  But at least you get Mahnke drawing him, which is probably the best thing you can do.  Everything in this title is still moving along very very slowly, but it’s working.  This issue had a little too much slap happy fighting with Lobo, but the little twist at the end made it all worth it.  Another solid book with its sights set on the future.

I’m a sucker for the Spider-Ham stuff.  It’s just doofy and strange enough to keep me intrigued.  Apparently it started 25(!) years ago, meaning this whole thing is older than me (how’s that make you feel?), but that doesn’t mean it’s inaccessible.  In fact, I’d say this is probably one of the most fun comics I’ve read in a while.  Good stuff.

Interesting.  After the Levitz penned debut of Terry McGinnis in the Supe/Bat Annual a couple weeks ago, now we get an actual mini, and how is it?  Actually pretty good.  A little shaky on the art side of things, but the story is very well put together.  I’m a little hesitant about the villain reveal at the end, but since it’s supposed to be the future, I’ll give them benefit of the doubt.

Well this one just barely made the cut.  After the huge delay (three months? More?) I was sure I would have no idea what was going on.  Surprisingly, it was pretty easy to catch on to.  Even the text pieces, which usually annoy me, hold up really well.  Everything about this is interesting, and just as strange as any Warren Ellis piece is.  If you wanna know where Hickman and others learned their trade, look at something like this.

The last in the long line of anniversary issues this month, and this is surprisingly good.  I can honestly say I’ve never read a Wonder Woman comic before this, but this was actually very interesting.  the pin-ups were really great (Jock’s made me double take), and the stories themselves are all well put together.  The JMS story at the end makes me nervous for what he’s going to do next (as in “will it be any good?”) but I have a little faith after this quality issue.

Perhaps the most interesting book of the week.  Iron Man doesn’t even show up as the Mandarin steals the spotlight.  Through all the lies that are his life, comes  a story of heartbreak, denial, and tragedy.  It’s weird to describe a story like that, but seriously, that’s what happened.  Invincible Iron Man is one of the best books out there now, and this annual is a key example of why.

Other amazing things that you should just go out and buy the trades of, or start collecting already!