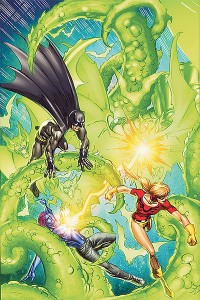 And we’re back!  This was a lighter week, but don’t worry, I still found some mediocrity in there.  So let’s get to it!

This was rough.  I haven’t really liked anything about the Robinson-Bagley run so far.  It’s been a series of weird narration and what seems like half done Bagley art.  This is no exception.  I really do like Bagley, he’s on time, usually passable to look at, and fairly consistent, but that’s not what we’re getting here.  Instead he’s drawing a million characters and it’s impossible to look at.  He also draws one of the worst Wildcat’s I’ve Ever seen.  The JSA title gets lumped in because these two are about to tie together.  JSA finishes it’s weird opposite reality with a crap load more talking and then tells us to continue the story in JLA 44.  See the problem here? Cause there’s many…

You will never hear me say a bad word about Kelley Jones art.  Ever.  This is another in a long line of his amazing Batman work, but the story itself is just abysmal.  At first it seems like it’s going to be just another of the OK stories we get from Joker’s Asylum, but then it veers off in the end to a way that ruins the entire thing.  Without spoiling it, I’ll say open ended stories aren’t bad.  But when it’s a one-shot with no future, a lack of clarity is just unprofessional.  Wasted art, which bums me out more than anything.

This just makes me sad inside.  Here you have two capable (if not great) creators working on what was once an amazing title.  But delays have hit it so hard that they’ve thrown a crappy mini-series on top of it just to make sales.  I read this story and had no idea what had happened in the previous issues, and that is just disappointing.  I’m sure this will probably make a nice trade, but when I see the “to be concluded” at the bottom, my mind immediately screams “When?”

I don’t care about vampires.  Now that we have that out of the way, you’ll probably understand why this is “not very awesome”.  It’s a very nicely put together issue, and I think it ties into the X-men series coming out next week (on Thursday, during our X-men party, shameless plug) but vampires just aren’t my style.  And this… this has a lot of vampires.  Groups and names are thrown about to the point where I just kind of went numb.  Perfect for people who like vampires, which does not really include myself.

I don’t like David Finch unless there’s an “er” at the end of his name, so that cover doesn’t really draw me in.  The rest of the story is very “meh” with the all new Lex-Luthor-as-a-main-character theme to the book.  It’s still funny to me that they think not having Superman star in Action is a good idea, but that’s just me.  Overall it’s an interesting take, with lots of strange bits (dialogue styles, robot Lois, etc.) and I think Cornell makes it better than it really is.  Worth looking at.

Geof Darrow’s hyper detailed cover absolutely kills this issue for me.  Spend a few minutes looking at just how ridiculous and awesome that cover is, then turn to any page of the book.  This is the problem with hiring out covers.  It’s basically false advertising.  I’m sure there’s plenty of good ideas in this story, but the transition from art just kills me inside.  Lame.

Alex Ross still doesn’t write very good comics, and this Earth X rip-off is no exception.  That is all.