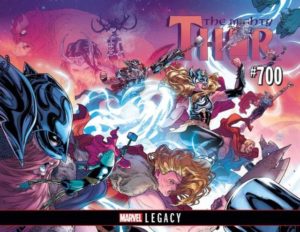 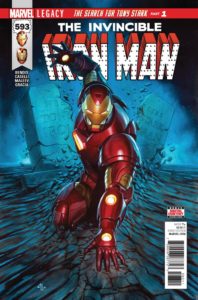 The Mighty Thor #700, a double-sized anniversary issue, is not the end of the current storyline, but a criss-crossed-plots advancement of it, a smorgasboard of all the “War Between the Realms” sub-plots you’ve been missing if you haven’t been reading it, all written by Jason Aaron (who’s been chronicling Asgardian adventures for five years now) and with art by, among others , Walt Simonson, regular collaborator Russel Dauterman, Olivier Coipel, Becky Cloonan, Mike del Mundo and Jill Thompson (on, of course a Frog Thor sequence). There’s an argument that Aaron, mostly with Dauterman, has made this one of the best straight-ahead super-hero books on the stands right now, and this issue’s a good place to find out if it’s true.   Invincible Iron Man and Incredible Hulk offer similar blends of the old and new in the first of their renumbered “Legacy” issues: Iron Man sees the cast, including the

Riri Williams Ironheart, beginning a “Search for Tony Stark,” intercut with a Dr. Doom/Thing scene by Alex Maleev that’s a coda to the just-concluded Infamous Iron Man; meanwhile,  Incredible Hulk sees a space-exiled Amadeus getting a distress call from Sakarr, the original “Planet Hulk” setting — and the creation of current writer Greg Pak, who began his first run on this title with that storyline, going on twelve years ago. All three of these core Avengers characters — Thor, Iron Man and Hulk — now have top-tier creative teams who’ve worked together long enough to be offering their best work, work that Marvel hopes, if you sample it, will bring you back for more: as good a summary as any of the goals of “Legacy.” 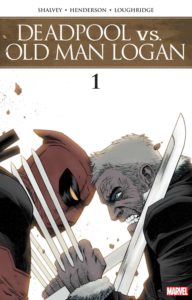 Deadpool vs Old Man Logan is perfectly good for what it is, 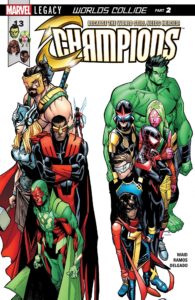 and just based on the title you already know whether you’d like it or not;  Shalvey’s not a bad writer, although he’s a better artist, and his cover’s casual flair for design shows why it’s too bad that he couldn’t contribute some of the interior art, too.  Champions continues to be a companion to Waid’s Avengers, especially with the two teams in the middle of a crossover; Humberto Ramos’s cartoony, dramatic style  keeps working well with the book’s young, energetic and idealistic Legacy characters. 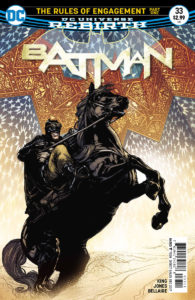 Batman #33 has a newly-engaged Batman and Catwoman on a desert journey beautifully drawn by the mighty Joelle Jones, with a destination , obvious once it’s revealed, that gives her a chance to indulge her talent for drawing casually-murderous, exquisitely- 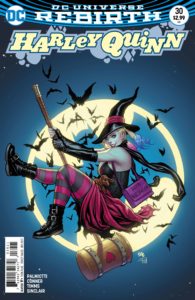 turned-out women. Dark Nights: Batman: The Drowned features yet another dark avatar, this one from a gender-flipped alternate universe where Batwoman had to defend Gotham against invading Atlanteans headed by Aquawoman, and altered herself to live underwater and match their strength, to bloody and ruthless effect; she fights “our” world’s Aquaman with predictable results, if you’ve been reading the other books in this series.  Harley Quinn comes out on the heels of this week’s news that the book’s writers, Amanda Connor and Jimmy Palmiotti, will be leaving it in a few months: all the more reason to appreciate its surprisingly-deep characterization, humor and subversive worldview  now — especially when seasoned by the playful Hallowe’en alternate cover by Frank Cho (click on it to make it bigger…). 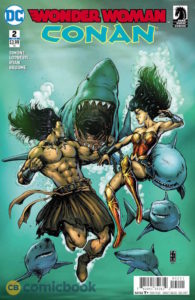 Of the non-Batman DC books, Wonder Woman/Conan continues to be better than you might expect, largely because of Gail Simone’s script, which provides 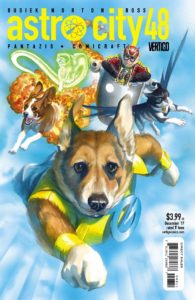 a mysterious childhood connection between the two warriors and some mythic undertones, in among the swordplay and fighting; Aaron Lopresti has a knack for both fight scenes and facial expressions (which makes him a good choice for a book like this), and delivers when he has a big double-page splash opportunity. My only complaint is that the cover is actually the last page of the book — so it’s not particularly useful in advertising this issue, and should have gone on the next one, instead.  Astro City offers the conclusion of a two-parter about a petty thief who finds a mystical amulet that merges him with his pet corgi to become a superhero (this being Astro City…); that may sound stupid, but 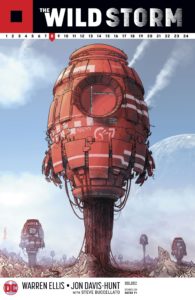 between Mike Norton’s dead-on, cute/realistic dog drawings (look at that cover!), and Kurt Busiek’s masterfully-constructed, heart-tugging script, it’s one of the best stories of the year — if you’re any kind of dog lover, you won’t want to miss it. The Wild Storm is another installment of Warren Ellis’s re-imagining of that imprint; we’re at the point now where members of the WildC.A.T.S., Stormwatch and the Authority have mostly all shown up, and now are starting to combine in various relationships and dark-ops opposition moves, and it’s, as you’d expect from Ellis, smart and strange and energetic and fun, even more so if you have fond memories of the heyday of those original runs. 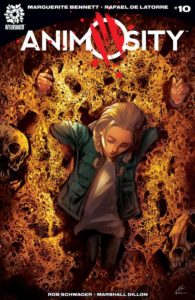 where all animals, from mayflies to sperm whales, suddenly “wake” and can talk, think and presumably have souls, is becoming something of a franchise, with Animosity: Evolution taking a Fear the Walking Dead role as a West-Coast-based, slightly-earlier examination of the book’s world.  Eric Gapstur, the artist on Evolution, has a darker, more painterly style than Rafael de LaTorre’s on the main title, but both benefit from Bennett’s clever, sometimes-funny/sometimes-tragic social-satire scripting, and Rob Schwager, who does the coloring on both books, lends some continuity between them, too: it’s an interesting world, and one worth 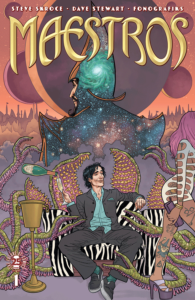 exploring. Maestros is about a ne’er-do-well, outcast-on-Earth, half-breed son to the wizard-king of the universe; when the entire royal court is obliterated by an ancient enemy, he becomes the heir apparent… if he can live long enough. Creator Steve Skroce has some of Frank Quitely’s knack for drawing beautiful super-people brawling with alien hordes, and the story cuts between the roguish main character and his Earth-born mother (the only survivor of the carnage) fighting to stay alive, and flashbacks to ten years before, when he was a regular early-teen Earth kid, 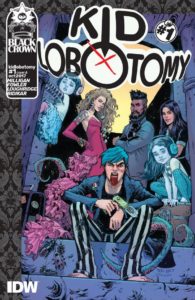 and then found out about his alien heritage when his wizard/ruler/dad showed up. There’s a combination of action, humor and crowd-pleasing relationship drama that’s very Mark Millar-ian, and if you liked series like Empress you’ll probably appreciate this, too. Kid Lobotomy is for fans of early-’90s Vertigo books (back when that imprint was at the peak of its influence and popularity); it’s by Peter Milligan, who wrote about half of them then, and has his typical blend of post-adolescent angst, punk-rock attitude, and weird psycho-sexual scenes and themes: a heady mix in the Thatcher era, and one that still resonates today, in the Age of Trump. 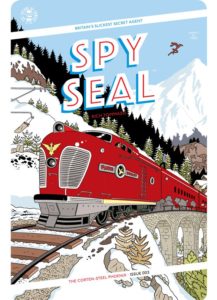 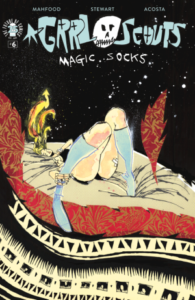 Spy Seal, a British secret-service thriller with anthropomorphic animals as the leads, continues to 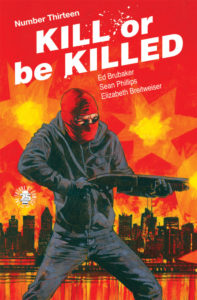 showcase Rich Tomasso’s chameleon-like artistic abilities — his previous series, She-Wolf, had a stark, underground, almost-woodcut style, befitting its B-movie/horror genre, while Spy Seal is a tribute to European artists like Hergé, all stylish small panels and sleek, clear lines. In Grrl Scouts, Jim Mahfood’s style is whatever the opposite of “sleek, clear lines” is, but it works for him: psychedelic imagery, Zip-a-Tone all over the place, anarchic layouts that keep trying to burst out of the page, and a genuine hipness that just won’t quit; this conclusion to his latest tale, about a trio 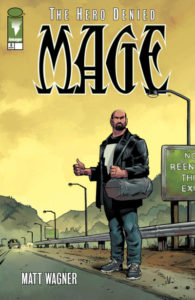 of kick-ass women who were punching Nazis and corrupt cops and greedy businessmen before it was a thing (and before anyone could pronounce “antifa”), sticks the landing messily but perfectly, making Grrl Scouts: The Magic Socks his best series yet. Kill or be Killed wraps a scene of the hero getting ready to kill Russian mobsters (with his trusty shotgun with his attempts to decide whether the demon driving him to kill at least one person a month is caused by mental illness (and triggered by memories of his now-dead father’s drawings of the monster), or real, and maybe plagued both him and his dad; either way, it’s hard-boiled action by a creative team 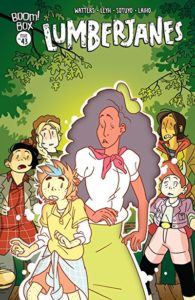 that’s built up an impressive library of crime/suspense graphic novels over the last two decades.  Mage: The Hero Denied is still early in its conclusion to Matt Wagner’s trilogy about a mystical hero who just wants to lie low and raise his family; one of the pleasures this time out is noticing that the story’s small asides about other, newer heroes who’ve sprung up in the decade Kevin Matchstick’s been out of action, and treat him as an almost-legendary elder statesman who may or may not have what it takes, are parallel to the ways younger comics creators treat older pros like, well, Matt Wagner himself: that’s a taste of the care and cleverness that go into every aspect of the art and story here. Lumberjanes has, not only the core ‘janes, but most of the supporting cast, in 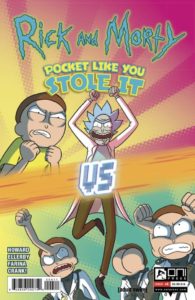 a big fight against unstoppable rock giants and wonky time bubbles to save both their camp and the magic forest that’s its home; it’s a good sampler of the pleasures of this groundbreaking, always-heartfelt and always-fun series. Rick and Morty, meanwhile, has been having a pop-culture moment (thanks to McDonalds and its rare Szechuan sauce…), and this spin-off mini-series that trades on the Pokémon Go craze (but with thousands of other-dimensional Mortys as the quarry — not to mention all the Ricks… and Jerrys…) is a good example of its dark, violent and very funny DNA; if you like the cartoon, the comics’ anarchic energy will appeal to you, too.

With 40 years of experience in comic reading, collecting and reviewing, English Professor Phil Mateer has an encyclopedic mind for comics. Feel free to ask Phil about storylines, characters, artists or for that matter, any comic book trivia. He will post your questions and answers on the AABC blog. His knowledge is unparalleled! He is also our warehouse manager, so if you are looking for that hard to find comic book, ask Phil!
View all posts by Phil →
This entry was posted in New Comics, Reviews and tagged Animosity, Astro City, Batman, Champions, Deadpool, Grrl Scouts, Harley Quinn, Hulk, Iron Man, Kid Lobotomy, Kill or be Killed, Lumberjanes, Maestros, Mage, Rick and Morty, Spy Seal, The Wild Storm, Thor, Wonder Woman. Bookmark the permalink.