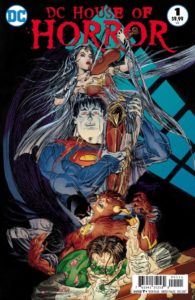 DC’s Hallowe’en special this week, House of Horror, offers eight ten-page Simpsons Treehouse of Horror-type tales where things go horribly wrong for their heroes;  the Harley Quinn episode, with Kyle Baker art and a script by Bryan Smith and Brian Keene, is the most notable, but a Justice League vs. zombies story by Brian Keene and Scott Kolins, a chilling

Superbaby  by Edward Lee and Howard Porter, and a moody, doom-ridden Shazam! tale called “The Possession of Billy Batson,” with Howard Chaykin art, also stand out. Batman: The Merciless is another Dark Knights: Metal one-shot, this one about an alternate-universe Batman who’s in love with Wonder Woman, sees her apparently killed by Ares, puts on that god’s enchanted war helmet to get revenge, and becomes a, yes, merciless warrior/killer. Francis Manapul’s art always manages to make stuff like this entertaining, and he has plenty of characters to play with; if you’ve been getting the other books in this tie-in series, this one’s a worthy addition. Ruff and Reddy is another Hanna Barbara character update; the dog-and-cat 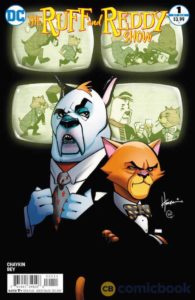 partners, who were the company’s first animated success, predating Huckleberry Hound and three years before The Flintstones, are here reimagined as living in a Roger Rabbit-like humans-and-cartoons-cohabiting world where they had a smash early-Baby-Boomer-era hit, endured scandal and an acrimonious split-up, and are now has-beens. Chaykin, the writer, has the gruff showbiz cynicism, jaded sense of humor  and deep knowledge of early TV to pull this off, and Mac Rey’s art manages the difficult task of making the characters older and more human-acting, but still cartoons; if you liked the deadpan social satire of the recently-concluded The Flintstones, you should like this too. 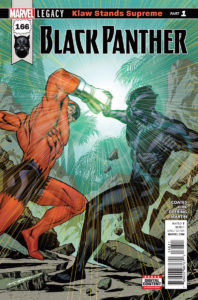 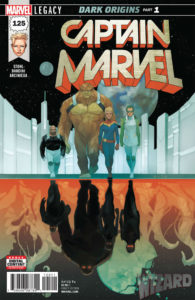 Lots of Marvel books with Legacy renumbering — or, failing that, at least the starts of new arcs — this week. Black Panther #166, the first chapter of a Panther/Klaw duel, barely has T’Challa in it at all, instead offering an origin of sorts for the living-sound villain. Coates, after a year on this book, has turned into a confident, efficient storyteller with a fan’s enthusiasm for the characters, and Kirk, with help from colorist Laura Martin, gets off some cool effects, and some startling violence; curious readers who pick this up after some time away from it will find reason enough to stick around.  Captain Marvel #125 (they got that number by counting 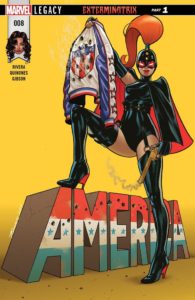 the first two Ms. Marvel volumes, plus all the Carol Danvers Captain Marvel books), is pretty much a continuation of The Mighty Captain Marvel, with the cast and ongoing subplots of that book intact, although their orbiting space station was destroyed in that whole Secret Empire thing, and they’re currently Earth-bound; if you liked its pro-military, subtly-feminist, highly-competent heroine before, you should still like her now, and the new story offers a convenient jumping-on point for everybody else.  America is too new to require any renumbering, but 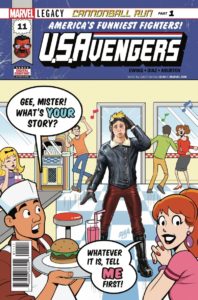 it’s also beginning a new story, and, like Black Panther, it’s been getting better as it’s gone along, with its creators’ growing confidence reflected in the title heroine’s head-on, passionate, kick-ass view of the world.  USAvengers, as you can tell by its intriguing cover, offers a tribute to classic Archie comics, as well as a callback to a classic late-Silver-Age Lee/Kirby Fantastic Four story; to say any more would spoil the book’s cliffhanger reveal, but Al Ewing’s clever plot, and artist Paco Diaz’s ability to get the residents of Riverdale… er, “Glenbrook,” looking just right carry it along nicely. 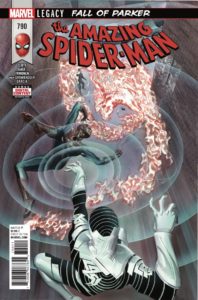 Amazing Spider-Man’s current arc is about transitioning Peter Parker from a global, tech-company-owning Tony Stark (or Bruce Wayne) type back 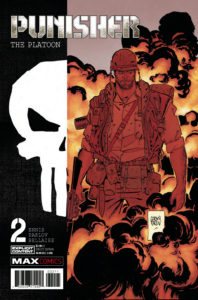 to the old hard-luck Parker, complete with a job change that many older readers, especially, should welcome; he’s also dealing with a pissed-off Johnny Storm, since part of the Parker bankruptcy is that the Baxter Building is getting foreclosed on. This is all covered with the usual smooth storytelling from Dan Slott, Christos Gage and Stuart Immonen — ASM has been one of the steadiest Marvel top-sellers for many years now, and, despite competition from movie stars like the various Avengers, Guardians of the Galaxy and other media-splashed franchises, it’s good to see the webspinner continue to be the flagship for the company’s comics. Punisher: Platoon continues Garth Ennis and Goran Parlov’s return to the character, looking at his very first tour of duty in Vietnam, as a green (but still tough and competent) lieutenant trying to hold his squad together as they deal with the 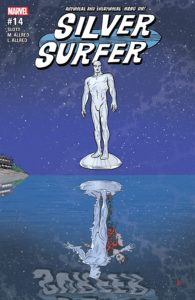 Battle of Khe Sanh. No modern writer writes better, or more perceptive, war comics than Garth Ennis (his only competitors throughout comics history are probably Harvey Kurtzman and Robert Kanigher), and Parlov’s ability to show character with just a few facial lines and shapes, as well as capture the brutality and chaos of battle, makes this required reading. Silver Surfer, meanwhile, reaches the conclusion of the Dan Slott/Michael Allred run that’s been going on for three years (and over three different volumes, all connected). Both Slott and Allred talk in the editorial material about how much pleasure and fun they’ve gotten from creating this series, and it has shown on every page; the careful construction (plot seeds planted three years ago come to fruition here, and make perfect sense), wonderful art, sense of wonder, and heartfelt romance will make this a perennial seller in collected form — but, if you read some of it earlier and drifted away, you don’t have to wait for that; get this issue, and the one right before it, and appreciate 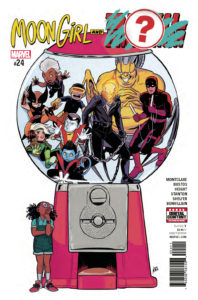 them now. Moon Girl and Devil Dinosaur is currently just Moon Girl (she dropped DD off in his own time, reunited with his companion Moon Boy, last issue), so she’s looking for a partner or two. The cover indicates some of the possibilities — the X-Babies (and Mojo), the Ghost Rider, Daredevil — and Montclare and Bustos make it all just as charming as ever,  with the usual action, thoughtfulness  and humor.  Lunella eventually ends up settling on another pair, though, who happen to be short a smart person; no spoilers, but it’s a logical choice, and should make for an entertaining couple of issues before her big red reptilian Scooby Doo comes back. 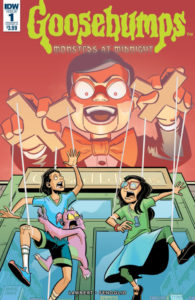 Lots of Hallowe’en first issues from the indy publishers this week, too — Goosebumps isn’t by R.L. Stine, but definitely uses the tropes of the franchise he created: kids with flaws (a high-school girl on crutches from a leg injury, and her asthmatic younger sister) in an 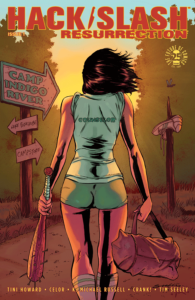 unfamiliar location (staying at their grandmother’s over the summer), who brush up against something mysterious (a creepy bookstore) and end up facing variations on a horror standard (in this case, a terror-filled amusement park and a “Chuckie”-like living doll); as you can see from the cover, it’s done in a cartoony style that should make it less scary for younger readers — and, for what it is, it’s not bad.  Hack/Slash is a return of that mildly-successful franchise, about a girl who hunts slashers/serial killers (her mother was one); original creator Tim Seeley is acting as a sort of show-runner (his work for the major comics companies presumably taking up too much of his time to do otherwise), but Cassie, the main character, is still recognizable, and fans of the previous incarnations of this book will probably still like it; horror books do well in unsettled times, and the last year or 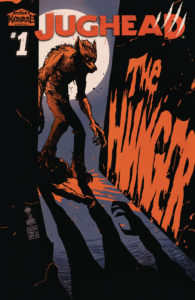 two certainly qualify, so this might generate some interest.  Jughead: The Hunger posits the beanie-wearing Mr. Jones as a werewolf (stemming from the one-shot with the same title from earlier in the year — which was apparently successful enough to launch this alternate-reality Archie book as a series); having killed, among others, Mrs. Grundy and Reggie Mantle, he’s run off and joined the circus, but of course his curse has come with him. Writer Frank Tieri is a definite step down from, say, Afterlife With Archie‘s Roberto Aguirre-Sacasa, and Pat and Tim Kennedy aren’t Francisco Francavilla (whose cover reminds us of just how cool this book could have looked), but everyone does their job effectively for all that, and the Kennedys do nail the one big werewolf splash at the end, making this a decent-enough companion to the other Archie horror books.  Black Crown Quarterly is an anthology/promo book for IDW’s new imprint headed by Shelly Bond, 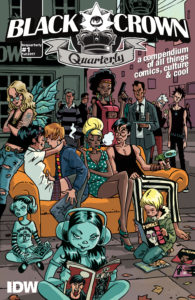 who was DC’s Vertigo editor for many years, and a big part of that line’s cutting-edge history. Her relationships with various comic creators mean that, for example, we get a couple pages of Peter Milligan’s Kid Lobotomy, the first issue of which has already come out, looking very much like a ’90s Vertigo throwback. There’s also Assassinistas, due out in December: girl commandoes drawn by Gilbert Hernandez (!), which should be enough for any true comics fan to check it out. Mix in work by Philip Bond, Will Potter, Rob Davis, Jamie Coe, David Barnett and Martin Simmonds (plus a pull-out poster by Frank Quitely, and a couple of creator interviews), and this more than justifies its $6.99-for-48-pages price point. 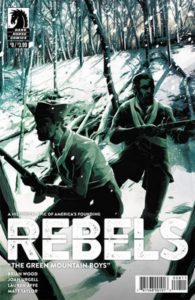 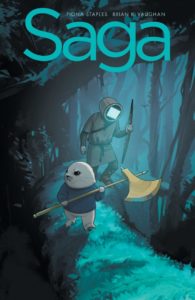 These last few books are all established series, without much to say about them except “They’re still good”: Rebels looks in on Ethan Allen and his Green Mountain Boys, battling the British in Quebec (and Fort Ticonderoga) in 1775, and 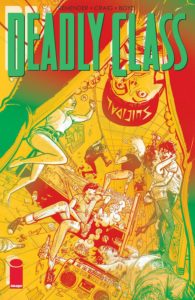 petitioning John Adams and the Continental Congress for money and recognition; it’s as well-researched and fascinating as ever. Saga winds up its current arc this week, which means it’ll be going on hiatus for a few months — but, for once, it leaves most of its cast in a good place, and, as always, Fiona Staples’s art is a joy.  Deadly Class continues its late-’80s high-school-for-assassins angst and action, with most of the main 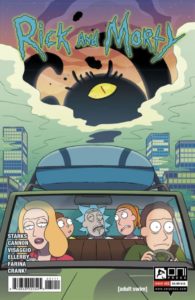 characters colliding in Puerto Penasco for sex, drugs and attempts to murder one another, culminating in a big, bullet-and-knife-ridden confrontation. “Attempts to murder one another” is pretty much what’s on the mind of Morty’s family in Rick and Morty, too, as they return from a disastrous vacation/car trip unable to stand one another — until they get abducted by perverted aliens, and have to work together to survive: all in a day’s adventures for this book, which always flaunts its dark, twisted worldview but leaves just a little room at the end for heart, too.

With 40 years of experience in comic reading, collecting and reviewing, English Professor Phil Mateer has an encyclopedic mind for comics. Feel free to ask Phil about storylines, characters, artists or for that matter, any comic book trivia. He will post your questions and answers on the AABC blog. His knowledge is unparalleled! He is also our warehouse manager, so if you are looking for that hard to find comic book, ask Phil!
View all posts by Phil →
This entry was posted in New Comics, Reviews and tagged America, Batman, Black Crown Quarterly, Black Panther, Captain Marvel, DC House of Horror, Deadly Class, Goosebumps, Hack/Slash, Jughead, Moon Girl, Punisher, Rebels, Rick and Morty, Ruff and Reddy, Saga, Silver Surfer, Spider-man, USAvengers. Bookmark the permalink.