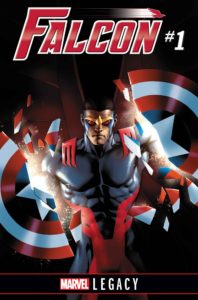 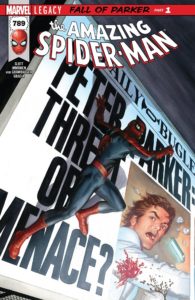 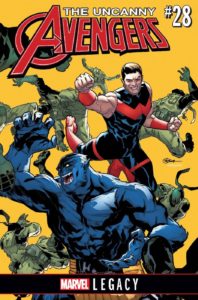 Falcon #1 is the only true new launch by Marvel this week;  as they did with Ta-Nehisi Coates and Black Panther, the company recruited a prominent African-American creator to helm it, in this case Rodney Barnes, who partnered with Aaron McGruder to produce the animated Boondocks, and has also produced Everybody Hates Chris, among other 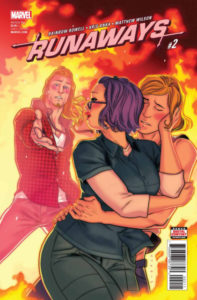 TV fare. As also with Black Panther, this debut reads more like the first chapter of a trade collection than its own stand-alone comic, but there are enough pointed dialogue bits and well-turned phrases to argue for sticking around, to see if it will improve as quickly as Panther did. The art has a nicely-designed Falcon, but is murky and dark; even the normally-dependable Rachelle Rosenberg’s coloring can’t brighten it up. In fairness, sone of this is due to the surprise villain reveal at the end (I’m assuming that the producer of 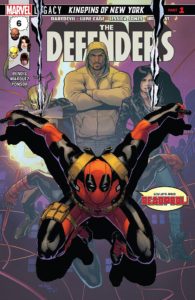 Boondocks is well aware of the irony of using that villain, with that name, here), but it doesn’t make this any easier for new, casual readers to like, either.  Amazing Spider-Man sees Peter Parker, his worldwide business concerns having tanked, hiding out with Bobbi “Mockingbird” Morse (and, in one of a couple of nice touches, wearing her “Ask Me About My Feminist Agenda” T-shirt), and paying a visit to the Daily Bugle; Dan Slott has kept this title moving in unexpected and entertaining directions for over a decade now; what other current Marvel writer has a similar tenure? Uncanny

Avengers is a valentine to 1980s Avengers fans, as the Beast and Wonder Man get together again and hi-jinx ensue, while everybody else takes a breath and gets a page or two of character spotlight after all the recent Hydra/Cap trauma. Runaways is a valentine, too, to the original Brian K. Vaughan run on this series, and it’s managing to recall that era, and reproduce the best parts of it, while still acknowledging everything that’s happened since then: not an easy task, although the X-Men Gold and Blue books have been doing something similar with that super-team, and of course all of that ties into the company-wide “Legacy” theme. Defenders continues to offer Brian Michael Bendis and David Marquez doing a mainstream- 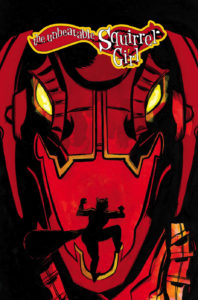 Marvel-universe version of the TV series, complete with a resurrected Diamondback; those snappy-dialogue and character-reveal scenes that Bendis does so well will be familiar to fans of the TV series, too.  Hulk (She-Hulk, really) is finally getting away from the angry angst of its first arc, as the cover over to the right there suggests; blind-date nights and ambushes and Hellcat guest-starring all make this a lot more cheerful and welcoming (while still adventurous) than the last few stories. Squirrel Girl has had just the right mix of those elements from the beginning, and this conclusion to its Savage Land/Ultron arc is just as clever and snappily-paced and -drawn as always; its a confident, optimistic light in a sometimes-too-gritty comics universe. 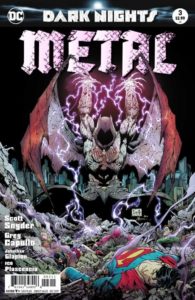 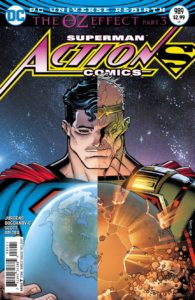 Dark Nights: Metal has been a hit so far, and this third issue, smack in the middle of the story, naturally sees the various heroes beaten, lost and losing.  Fortunately, Snyder and Capullo make it entertaining and good-looking, too; my only complaint is that the “dark universe” alterna-Joker/Batman speaks in red ink on a black background, and, given the general shadowiness of the art anyway, it’s 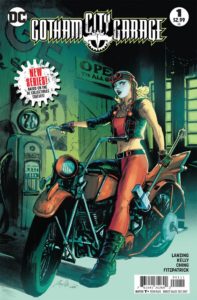 almost impossible to read: cool graphics idea, but bad execution. Action is in the middle of its “Jor-El comes to Earth” arc, with dear old dad disgusted with humanity’s primitive, criminal nature and wanting son Kal-El and family to leave and come to a “real” super-planet instead. Jurgens, who provides both script and art breakdowns, has been involved in the Man of Steel’s adventures for a long time, and has everyone’s character and reactions down cold; I’d still be surprised if this was actually Superman’s Kryptonian father, but it’s been a fun tale so far regardless. Gotham City Garage is an Elseworlds story (and a Digital First one, so this book is reprinting material that’s available online), based on a “collectible statues” line, of all things, about an ultra-mechanized, domed Gotham where Lex Luthor became governor 35 years ago and

somehow destroyed everything else, and has a brainwashed Batman working for him. Fortunately, there are a bunch of familiar girl-biker types — Harley Quinn, Catwoman, Silver Bansheee, Natasha Irons and Big Barda, among others — who are rebels, and help the newest escapee from the city: Jim Gordon’s daughter… not Barbara, but Kara, which gives you a clue about who she really is. Artist Ching has a scratchy, Denys-Cowan-like line that works well with these characters and setting, and for a comic based on a digital story that came from a line of collectible statues about kick-ass girl bikers, it’s actually pretty good. Ragman resurrects that ’70s Joe Kubert property, with a modern updating: a couple military guys from Gotham City, stationed in the Israeli desert, go tomb-robbing 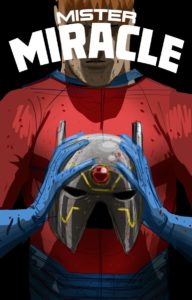 and awaken Things Which Should Not Be Awakened; now, the lone survivor is back in Gotham, suffering from PTSD and what he thinks are hallucinations, until the sentient pieces of cloth with his buddies’ souls (and others) trapped with them show up and start to wrap around him. Decent enough, although there’s more set-up than story, so it’ll take another few issues to see whether it fulfills its potential. No such worries for Mr. Miracle, which was a high-quality funhouse ride right from the start, and three issues in hasn’t slowed down: paranoia, danger, anti-life equations and Inception-like worlds within worlds, all in a nine-panel grid expertly rendered by Mitch Gerads to give Tom King’s twisty, quietly-apocalyptic script maximum effect. 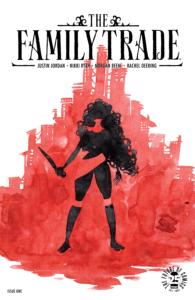 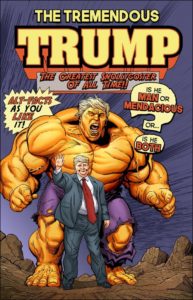 Weirdly (or maybe not…) two of the four new series this week involve some sort of Donald Trump character. Family Trade is about a futuristic floating city secretly safeguarded by the family in the title; one member, a young girl, has an assignment to assassinate a corrupt politician who wants to take over, and says things like “It is time to make The Float 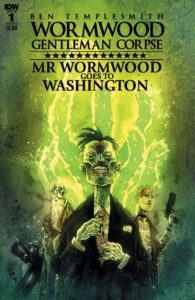 glorious again,” and, of course, looks remarkably like The Donald; she fails, and then goes undercover to try to redeem her mistake. Morgan Beem’s exaggerated facial features and watercolor hues remind me of M.K. Brown, one of the cartoonists for the old National Lampoon, with an underground sensibility that gives his smiling, glittery-eyed Trumpian psychopath a weird attraction. The Tremendous Trump is pure parody, as a glance at the cover and its “Incredible Hulk” takeoff will confirm; when Donald eats Cheetos, he turns into a big orange dumb monster (although one of the jokes is that no one can tell the difference), and ends up battling Kim Jong-un and, later, Vladimir Putin (who’s drawn as Mike Meyers

playing Dr. Evil). The art’s by Ben Dunn, so it’s both solid and suitably cartoony, and if you think our President really is a big dumb dangerous monster… well, you’ll probably appreciate it (you can file it under “p” for political comics, right next to your Barack the Barbarian books). Mr. Wormwood Goes to Washington doesn’t have Trump in it… yet, but since it’s about Washington insiders who sell their souls for power, an eventual appearance would seem inevitable. It’s by Ben Templesmith, using his already-dead detective character, and it’s exactly like you’d expect a Templesmith comic to be: satiric, horrific, imaginative and deeply strange, in a Bill Sienkiewicz/Sam Kieth way. One complaint: exactly like Dark Nights: Metal, it has its lead character talk in red- ink balloons on a black background, 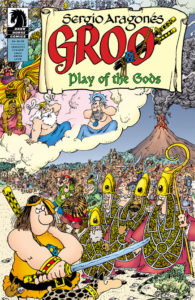 except that in this book that dialogue is, literally, unreadable unless you hold it under a hundred-watt bulb, not the best advertisement for IDW’s editing and production staff.  God Complex is about a near-future where the elite have access to data-streaming that renders them near-omnipotent, making them the “gods” of the title; they’ve taken on avatar names like Hermes and Apollo to emphasize that power, and we follow a police detective/viewpoint character who’s investigating a series of killings and encounters some of them doing the same thing. OK: like many sf first issues, there’s a lot of world-building, so it’ll take a couple more months before we can see the full shape of the series, 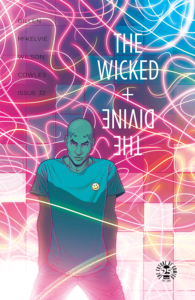 and whether it’s actually any good. Groo ends its current mini-series, and is still Groo; Sergio Aragones is a national treasure of two countries, us and Mexico, and the man turned 80 this year, so let’s appreciate him while he’s still alive and creating. The Wicked and the Divine is rounding into its final year, with quite a bit of death already (it’s a book about young adults who get god/avatar powers for two years and then die, so no surprise there, but still…); Jamie McKelvie is one of those artists who can make people lying in bed smoking and talking look fascinating and perfect, let alone when he gets actual action to illustrate, and this issue is a good sampler of his many talents; mix in Kieron Gillen’s intricate plotting and heart-breaking characterization, and it’s a sure bet.

With 40 years of experience in comic reading, collecting and reviewing, English Professor Phil Mateer has an encyclopedic mind for comics. Feel free to ask Phil about storylines, characters, artists or for that matter, any comic book trivia. He will post your questions and answers on the AABC blog. His knowledge is unparalleled! He is also our warehouse manager, so if you are looking for that hard to find comic book, ask Phil!
View all posts by Phil →
This entry was posted in New Comics, Reviews and tagged Avengers, Dark Nights Metal, Defenders, Falcon, Family Trade, God Complex, Gotham City Garage, Groo, Hulk, Mister Miracle, Ragman, Runaways, Spider-man, Squirrel Girl, Superman, The Tremendous Trump, The Wicked and the Divine, Wormwood. Bookmark the permalink.