This gets first place this week because Mahfood (who has a big Phoenix connection, having attended ASU and drawn for New Times for a number of years) turns out to be a perfect artist for the ordinance-obsessed Australian riot grrl. With scripts by Martin, her original co-creator, all the characters “sound” right, and, given the typically tossed-off nature of the stories here, Mahfood’s knack for humor, cartoon violence and obsessively-detailed background bits adds just the right ingrediants. If Jamie Hewlitt stays too busy with the Gorillaz to draw this book, then Mahfood is an inspired second choice. 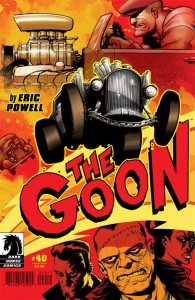 This hasn’t been coming out on any kind of set schedule lately, so any issue is a treat, and this one doesn’t disappoint: there’s no attempt to tell any serious story, but between the ’30s-era moonshine running, the drag races, and the Big Daddy Roth-inspired hot rods and monster drivers (including a double-page splash that’s an amazing tribute to the Rothster), no one’s going to complain. Powell’s sense of fun is infectious, and his art is so pretty (in its own car, weapon and booze-obsessed way) that readers will turn the pages of this book slowly, savoring every panel. 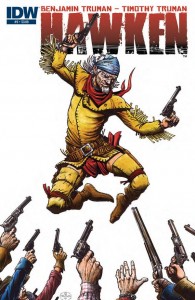 Truman’s another artist who loves weapons and gear, but instead of the moonshiny ’30s his preferred venue is the Old West (often with occult overtones, as fans of his work on the Vertigo version of Jonah Hex in the ’90s know). Here, he’s teamed with his son Benjamin as writer, and their tale of an ornery, leathery old cuss bringing vengeance down on bad guys in the late-1800s Arizona Territory offers all the pistols, Gatling guns, Bowie knives and rawhide that any Western fan would want.

This surreal science-fiction book has echoes of Graham’s King City, in that it’s hard to grasp the overall story, but (a) there’s clearly one there, so readers feel in good hands, and (b) the individual moments are so imaginative and bizarre that not understanding the plot really isn’t that big a deal. The only thing that would improve this is if Graham himself were supplying the art, but Milonogiannius has just the right combination of cartoony and epic to make captions like “living orbs along a fragile river of atmosphere held in place by an estuary of solar winds” look just as dreamlike and bizarre as they sound, so you’ll get no complaints from me. 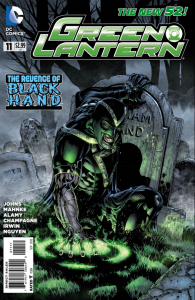 Two by Johns: GL remains his signature DC work, and this issue focuses on the creepy, death-obsessed Black Hand. Mahnke’s knack for making decaying corpses look good (only in comics would that be an asset, instead of a reason for institutionalization) helps enormously, despite the blips caused by the tag-team inking; he and Johns have been working together on this book for a long time now, 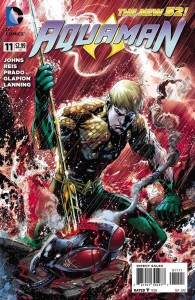 and their easy-flowing collaboration is a big part of what keeps readers coming back. So, too, with Reis on Aquaman, although the multiple inkers at least make more sense here, since there are a couple of detailed, fullscreen splash pages of Atlantian tombs to render. Reis isn’t quite on Mahnke’s level, either (although your mileage may vary), but hey: right now at AABC Aquaman is selling the same number of copies as Amazing Spider-Man, and that’s not a sequence of words I ever thought I’d be typing. 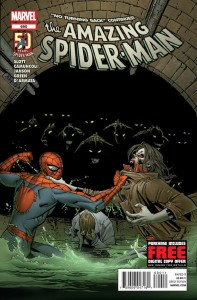 Speaking of Spider-Man… Camuncoli isn’t the artist that would first come to mind as a Spidey chronicler (he seems more at home with the shadowy occult goings-on over in DC’s Hellblazer), but with both Morbius and the Lizard on display here, he does OK – and Slott’s been writing the title long enough to have a firm handle on Parker and his world. The hook with the current version of the Lizard — he’s got Curt Conners’s human form, but his brain belongs to the angry reptile — is both sneaky and intriguing (it’s like Bruce Banner with the Hulk’s personality). Multiple inkers on this book, too (seriously, comics companies: you don’t want a consistent look?) but since one is the penciller, and another’s Klaus Janson, probably the best in the business right now, it’s not as annoying as with the two DC issues. 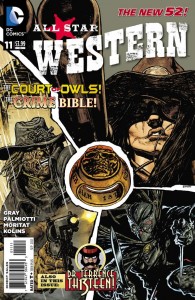 This continues to be one of the better New 52 offerings. Even though the Gotham City/Court of Owls/Crime Bible tie-ins seem forced, there’s the Moritat art, and the guest appearance by Tallulah, Jonah’s distaff (and equally scarred) counterpart to ensure that the action moves briskly, and that there’s humor and violence being dispatched with equal aplomb. 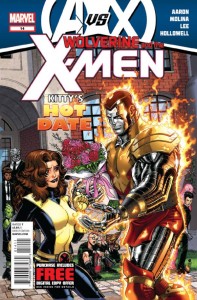 Nice to see the spotlight on Kitty here, but it’s mostly a date with her and the Phoenix-infused Colossus (which, naturally, makes him a dick about everything: “I am fire and life incarnate!”, etc., etc.), and the AvX tie-in makes it seem too much like wheel-spinning. This has been a good enough title up to now, but this particular issue barely has enough good bits to justify the price — especially since it’s one of Marvel’s 20-pages-for-$3.99 books. Also: shouldn’t a book called Wolverine and the X-Men at least, you know, have Wolverine appear in it?

With 40 years of experience in comic reading, collecting and reviewing, English Professor Phil Mateer has an encyclopedic mind for comics. Feel free to ask Phil about storylines, characters, artists or for that matter, any comic book trivia. He will post your questions and answers on the AABC blog. His knowledge is unparalleled! He is also our warehouse manager, so if you are looking for that hard to find comic book, ask Phil!
View all posts by Phil →
This entry was posted in New Comics, Reviews and tagged Aquaman, Eric Powell, Goon, Green Lantern, Hawken, Jim Mahfood, Jonah Hex, Prophet, Spider-man, Tank Girl, Tim Truman, Wolverine. Bookmark the permalink.